As I wrote before, I friggin' love this set.

I love it even more when I can find cheap hits from it at the local show. The only difference between these and the ones from that box break is that these are all from the second series of Enforcers, while that box was from the first release. 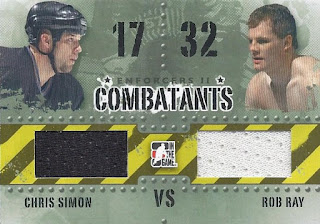 Now that's the best way to work around licensing issues and still make a card memorable. Plus, since the so-called "Rob Ray Rule" was implemented in order to prevent jersey-less brawls, it is even better as a photo in a set like this. 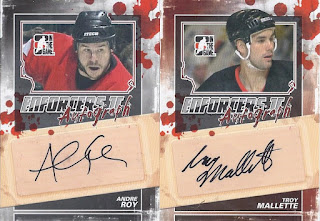 On a set with more of a historical feel than most, it is nice to pull not only one Ottawa Senator hit out of the sale box, but a pair of them. There's also a Dennis Vial that I didn't spot. Maybe next time. 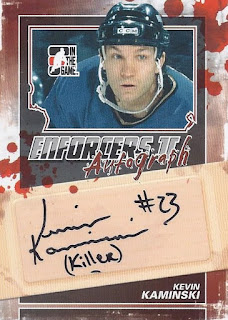 Yes. He did write Killer on the card. There are variations out there with only Killer and #23 written on the card. He's one of the few people in the set that didn't break the 1000 mark in career NHL penalties, but he more than made up for it in the minors, with 455 minutes worth of fun during 1 season with the Fort Wayne Koments in 1990-91. Then 169 more in that season's playoffs.  That's over 600 minutes in 75 games in one season. Plus he also spent some time with the Halifax Citadels where he added 44 more in 7 games. 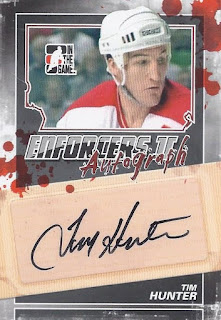 Best nose in the set. That is the nose of someone who hit the magic 3000 mark in penalty minutes. And if you want to see an even better photo of it, check out his 1991-92 Upper Deck card. Even if this card were not part of an Enforcers set, that photo just tells you all you need to know about the player.
Posted by buckstorecards at 14:16