Since I needed tape anyhow for wrapping presents, why not get some cards as well at the Dollarama? 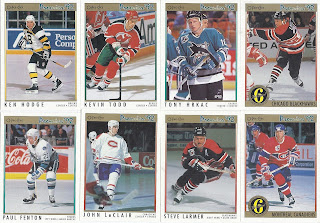 Item #1, and the only unopened pack in the product, was some 1992 Premier. Retro jerseys and expansion team jerseys highlight this pack. If there is such a thing as a Steve Larmer hot pack, this was it. It does contrast nicely with the teal of the Sharks against the Hawks, Bruins and Habs 75th anniversary jerseys. 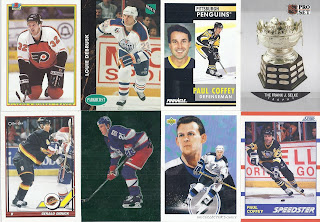 Up second was the 90s pack, which usually means lots of junk wax era stuff. And it was, but there are some interesting cards in there. Both Paul Coffeys were needs for my 2/14 collection. Anatoli Semenov is featured on the Tampa checklist, but he didn't get a card in either the first or second series. And the big surprise in this group was a rookie parallel of Shane Doan. It isn't mega valuable, going for $1.95 at COMC, but getting something like this was unexpected repack goodness. 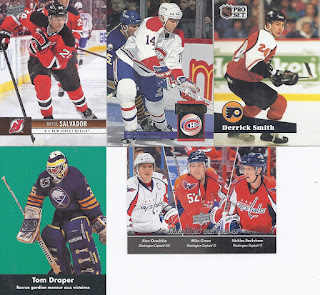 The Superstar pack is the third one I busted. I was far more interested in adding the Draper to my masks collection than anything else in this. 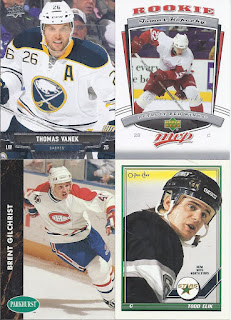 And the rookie pack. At least Kopecky had a decent NHL career. He's playing in the Czech league now. Todd Elik wins the derpy face award for this repack. He's no Craig Wolanin, but he still likely wishes any other photo would have been used.

And there you go!
Posted by buckstorecards at 06:22