After one zistle trade, we've been going back and forth with a few random trades. The latest included both hockey and baseball goodies, and enough to spread it over two posts. Starting with the hockey. 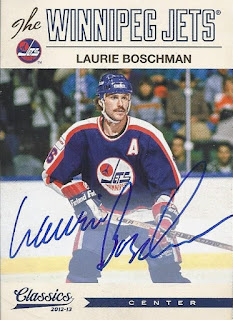 Laurie Boschman doesn't really hit any of my PCs, but his final NHL season was with the Ottawa Senators in their first expansion year. Plus, this is from the always awesome Panini Classics, which are always welcome additions to my collection. And you've got the classic Jets logo! 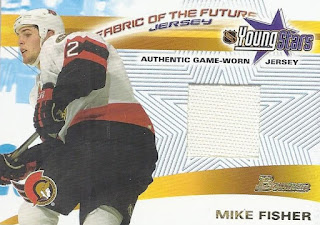 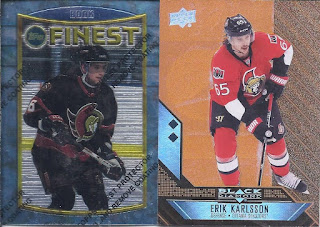 And a couple more Senators. You can't go wrong with any Finest card, as well as an orange parallel of Erik Karlsson from last year's Black Diamond. They aren't numbered on card, but are supposedly limited to just 35 copies each for the double diamond. Since they came in a pack of 3 at one per hobby box, it does seem a little low on that estimation. 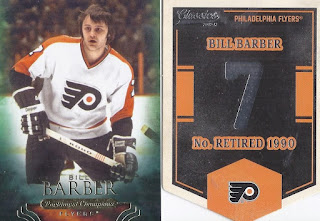 I've finally moved my Kitchener Rangers alumni collection from a box into a binder. And now I have two more cards for it of HoFer Bill Barber. Classics makes another appearance, this time with a binder insert, and Parkhurst Champions also makes their first appearance in this post.

But there's more where those came from, with these three cards moving into my pre-2005 masks binder. 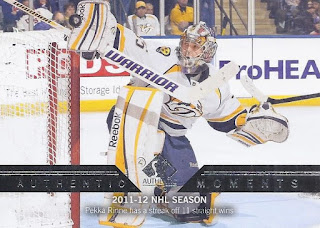 But there was also this for the post 2005 collection. Since the small white text is hard to read, this card's authentic moment(s) was Rinne picking up 11 straight victories. 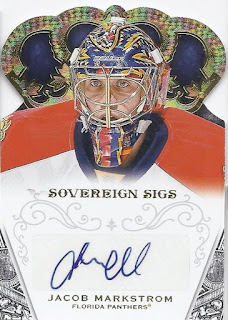 And to wrap this up, a really nice close-up of Jacob Markstrom and his Florida Panthers mask, enhanced by an autograph. A really nice addition to the hits portion of my collection.

Thanks for all these hockey goodies! I've already got one item in my COMC inventory to prepare for a return mailing, and hope to add one or two more before I hit ship on those. I'll post the baseball in a not-too-distant future post.

Posted by buckstorecards at 11:50