The mailbag was good to me today, rolling in with a pair of envelopes. One to start a trade, with the other to finish off a break. I'll hit the latter first, even though the first main envelope rolled in almost two weeks ago. I did feel I should wait until the second part arrived. So, I'll wait to get to the R.A. box until probably the weekend.

The randomizer was very good to me in the last mojobreak random break, a basketball break where I ended up with the Celtics, and ended up with a nice autograph of  Robert Parish numbered to 10. So, I went for a football break this time, featuring 2014 products. The ol' randomizer landed on Denver for me, so let's look at the Broncos goodies. 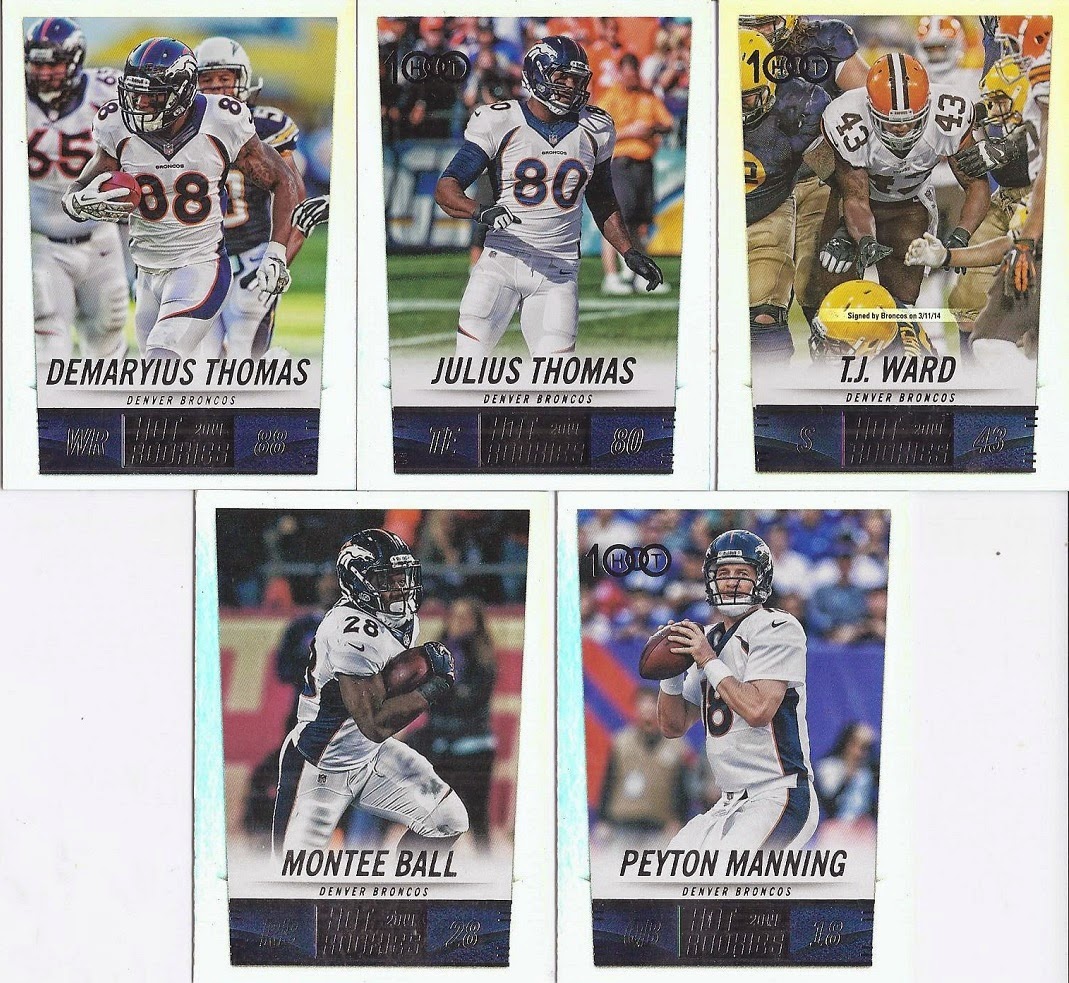 First up, Hot Rookies. Not a rookie in the batch, but they are all shiny base cards. Interestingly, Peyton Manning leads off the hot 100 subset with card #231, and T.J. Ward wraps it up at card #330. And while I did complain about the dullness of the Score photo choices, the Ward is pretty nice.

Get used to seeing Peyton Manning in this post. 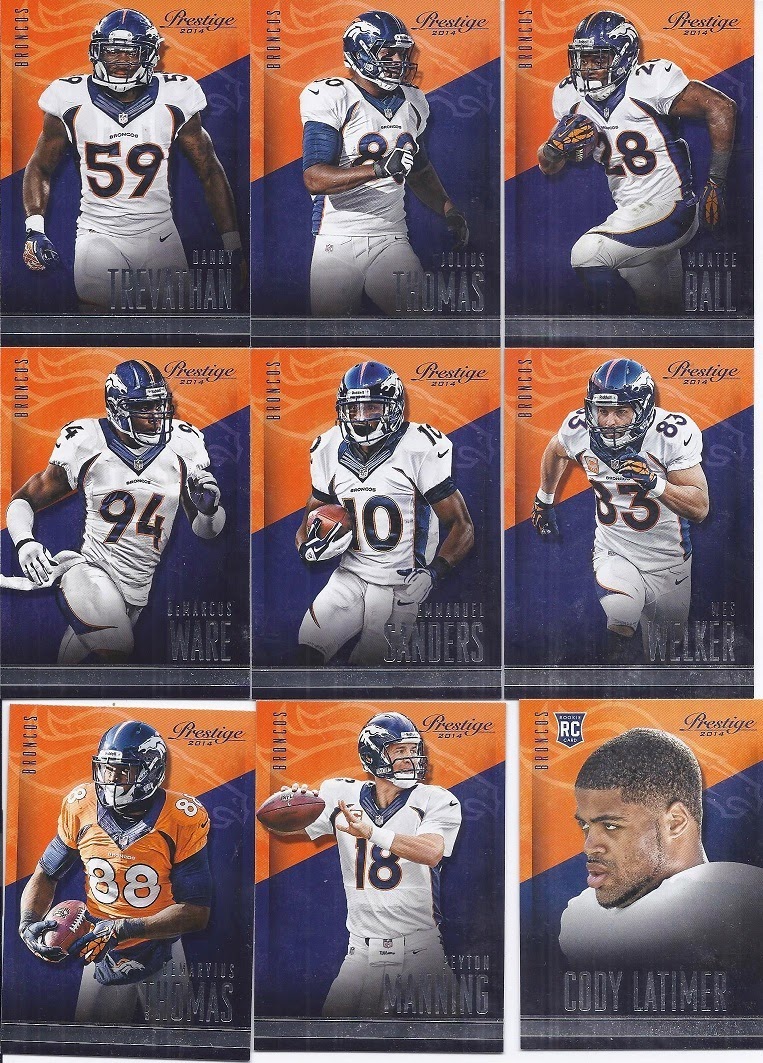 The boxes of Prestige landed me a complete base set, plus one of the rookies in the Latimer. That's the second appearance of Peyton Manning in this post. 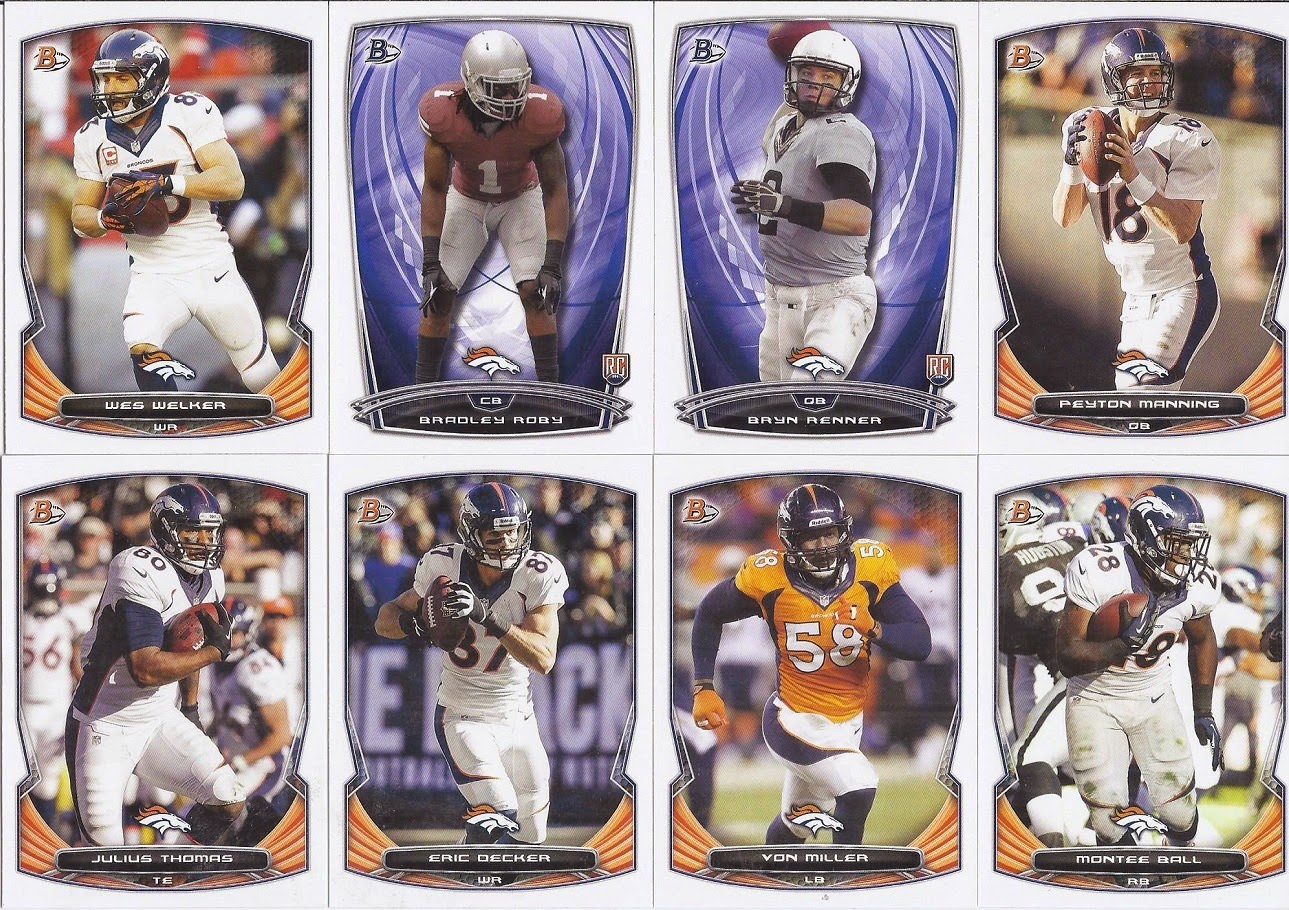 Off to Bowman, and the white border cards. I'm glad they went for the blue instead of the orange on the photoshopped rookies. I love the photo on the Decker. It almost looks like he's dropping back to pass. I know I've been collecting too long when I see the Bradley Roby, and wonder if he is any relation to the late Reggie Roby. He isn't. 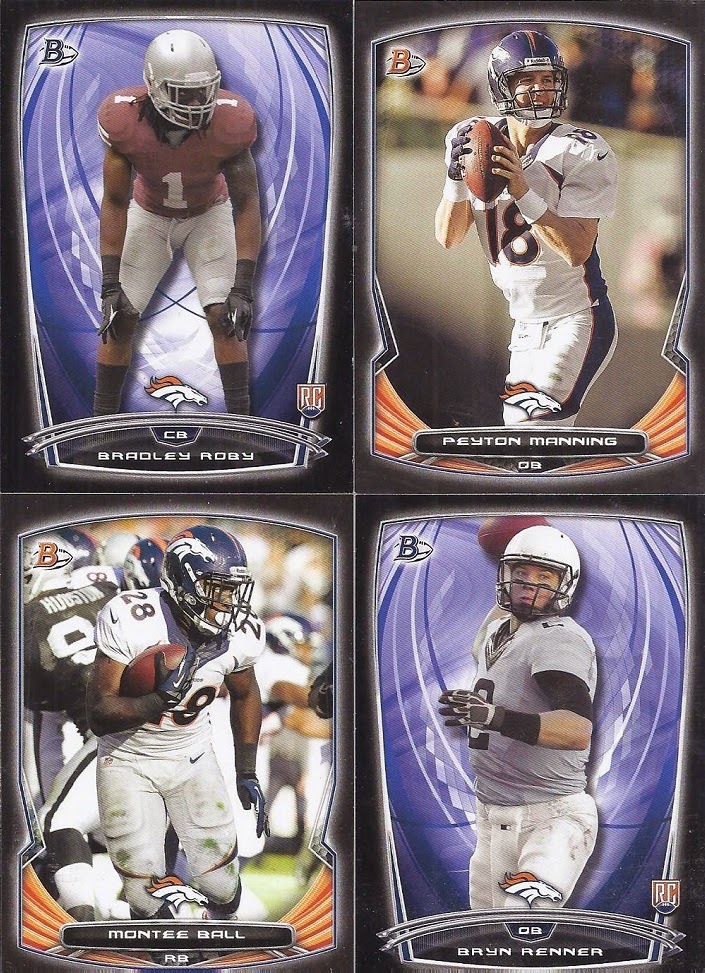 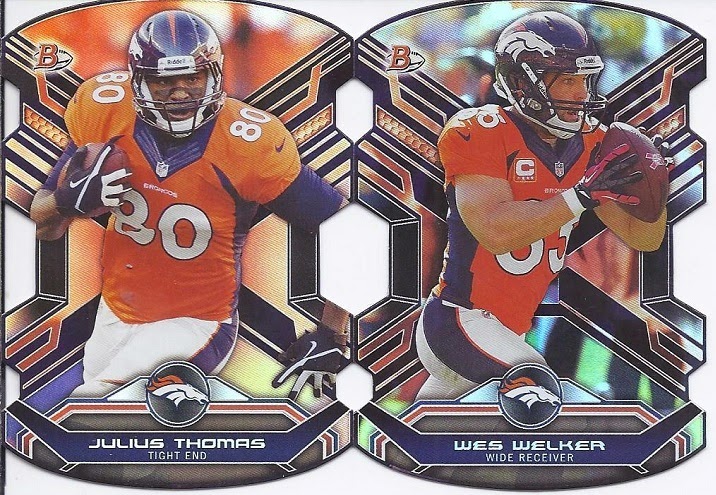 These nice die-cuts are the first group of cards in this post that don't feature a Peyton Manning card. Although these aren't numbered, they're quite nice looking. 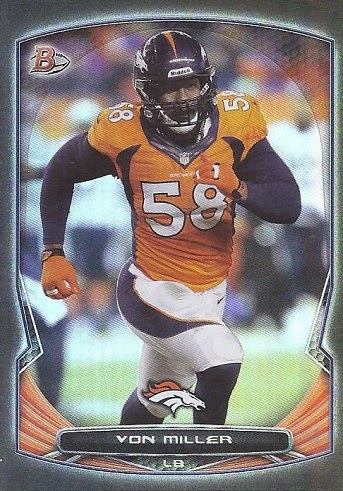 And finally, this rainbow parallel of Vin Miller to wrap up Bowman. I guess Rainbow is their version of "shiny, but not shiny enough to be a refractor".

These aren't licensed professionally, so these NCAA cards went to whatever team they were on in 2014, or played the most games with. Not a bad crew here to get base cards of. 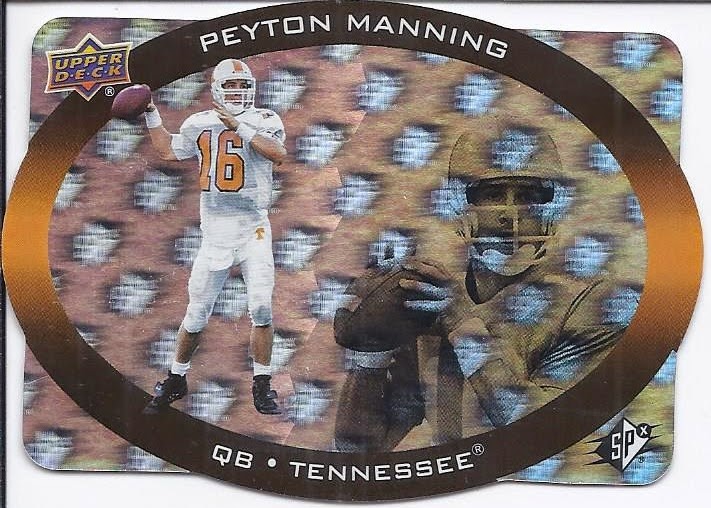 And here's a nice hologram card. Amazingly, the same picture wasn't re-used twice on the front. Although the hologram image does appear to be re-used on the back. As can be expected with holograms, they tend to scan louder than they are. 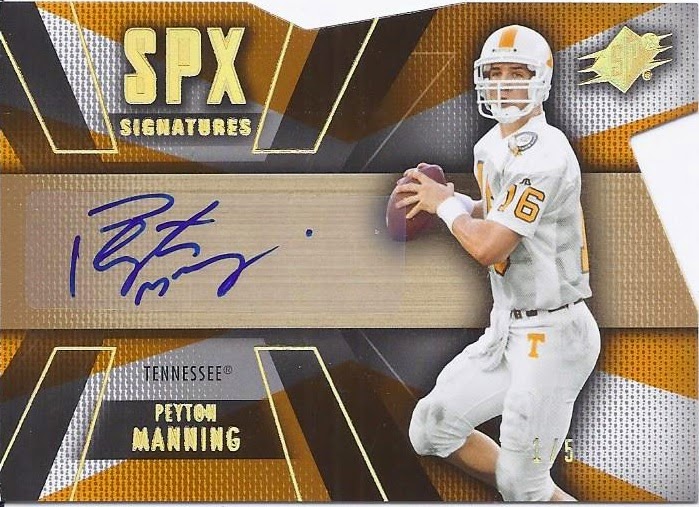 And to wrap up the football portion, how about a Peyton Manning auto numbered to a whopping 5? I'm almost certainly going to have this on ebay over the weekend. Much like with the Celtics break, I only got one hit (at least directly), but it probably qualifies as the one to get.

But, there was one more to go. The randomizer was still very good to me when this came out of one of the Prestige packs. 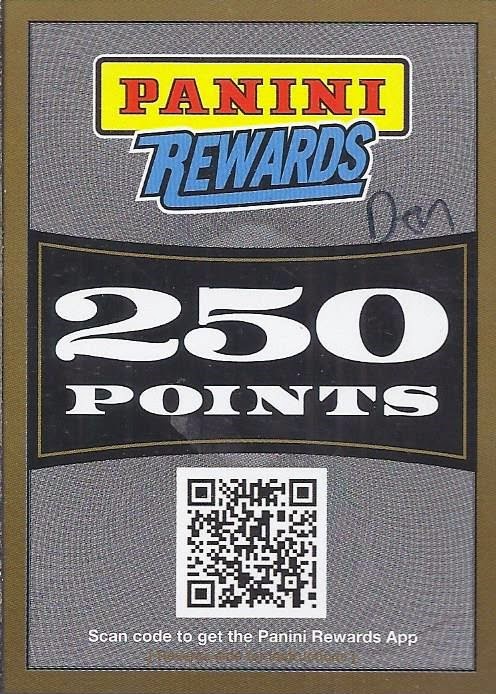 Since these redemptions are not tied to a specific player, they were randomed through all the teams. There were 3 of these that popped out, and I ended up with 1 of the 250 point ones.

So, I had to then select a 250 point card. There were no baseball cards at this point, so I limited to some other sports. At that level, the Senators only had some redemption specific 1/1s, which didn't really appeal to me. For the Bills, they had some nice cards at 250, but I'd already acquired a nice collection of relics and autos from the 2013 rookie class, so I passed on those. There was a DeRozan card for the Raptors, but that was a relic card shared with other non-Raptors, and that didn't really appeal to me. I went back to football to look for Alshon Jeffrey cards for my 2/14 collection, but those were of cards that I could have added at not too great a cost at COMC, so I passed again.

Finally, I just went to hockey, and searched on 250 point cards. I almost pulled the trigger on an Alex Chiasson 4-colour patch /25 from Certified, seeing as he will be a Senator next season. This was going for $50 on COMC, so it would feel like a good turnaround.

But, that would still be a Dallas card.

Eventually, I decided to go for a simple, one-colour Hall of Famer relic. 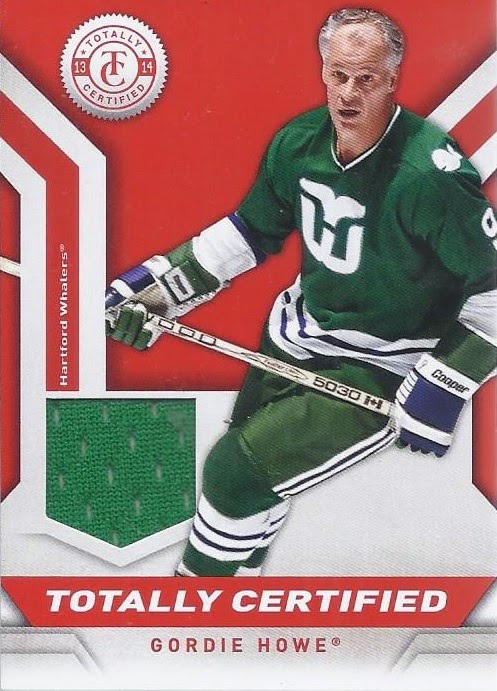 And with apologies to Shoebox Legends, I'm keeping this beauty. Especially since Panini charged for shipping on this redemption. Boo to that. But hooray to this nice looking card.

Still, the shipping cost left a bad taste in my mouth, and any future point redemption cards will likely get sold.
Posted by buckstorecards at 14:15