Time to dig into Topps Football '14

Let's bust a jumbo packj of the new Topps football release. I'll probably set build this, so let's hope I get off to a nice start. Just fresh into the LCS. 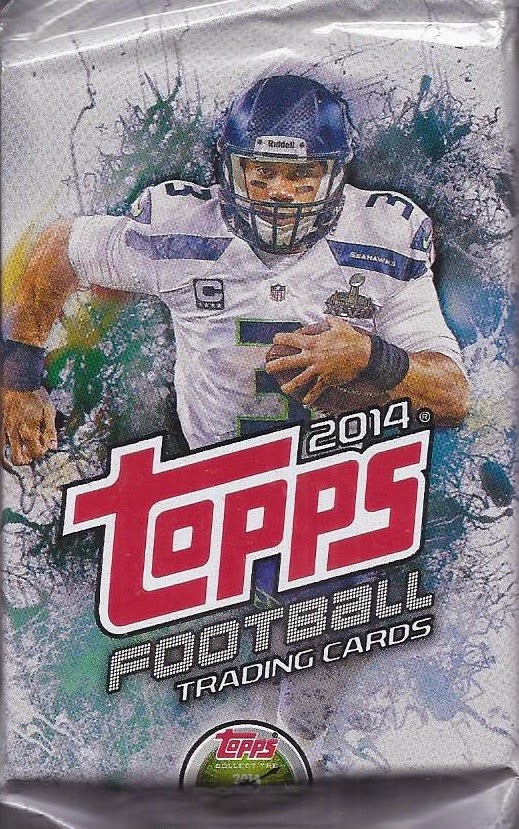 One pack is always a nice way to start. Lots of pictures in this post! 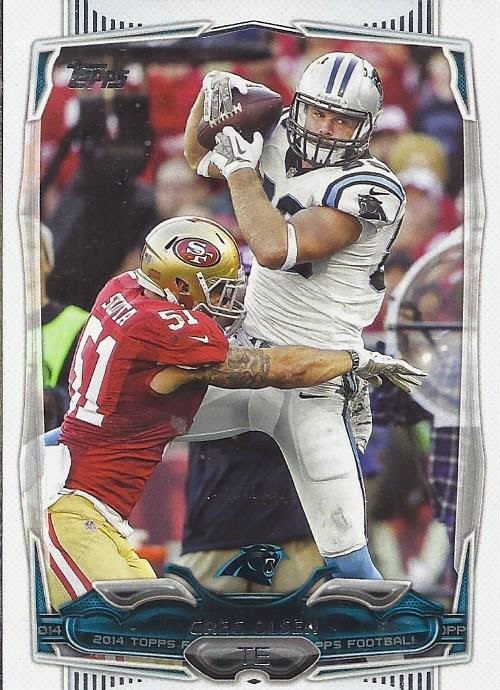 Greg Olsen - A nice action shot to start off as my first base card of the season.
Torrey Smith
Rams Team Card 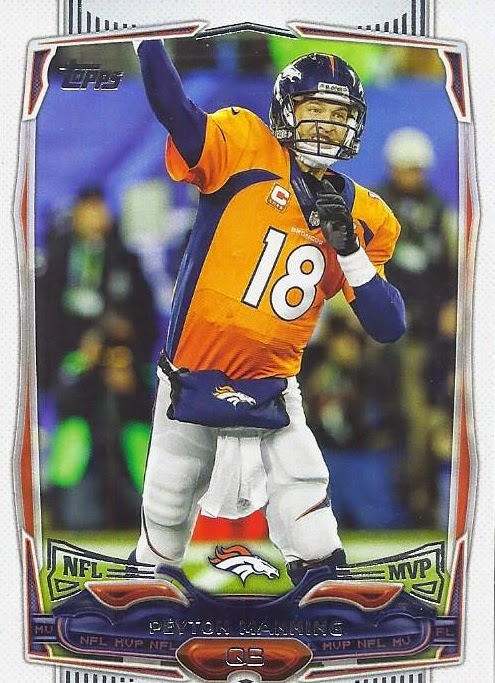 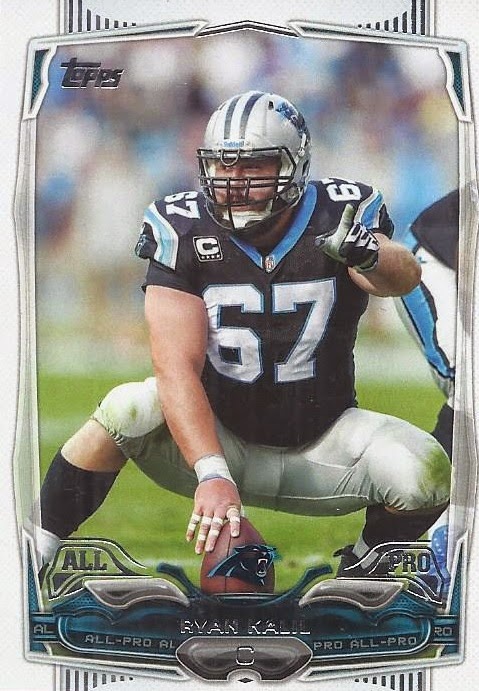 Ryan Kalil - I always like coming across OL cards. You can also see how the All-Pro cards work this year. I think I like this better than just using a simple logo.
Nick Perry
Justin Blackmon
Julian Edelman 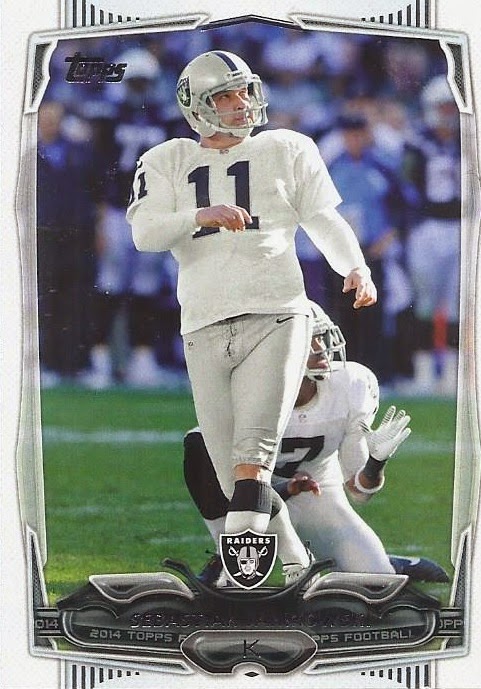 Sebastian Janikowski - And a kicker in the same pack as an OL guy? What wizardry is this?!?
Anquan Boldin
Jordan Reed
Miles Austin
Andy Dalton 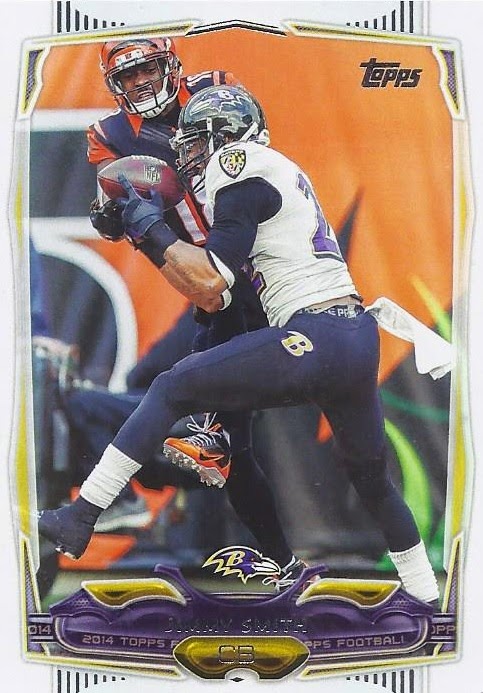 Jimmy Smith - Another great photo choice, as Jimmy Smith picks up one of his two interceptions last year. If you want to see the play it comes from, putting "Jimmy Smith' interception and Bengals into your favourite search engine should bring up the play. Poor Andy Dalton. 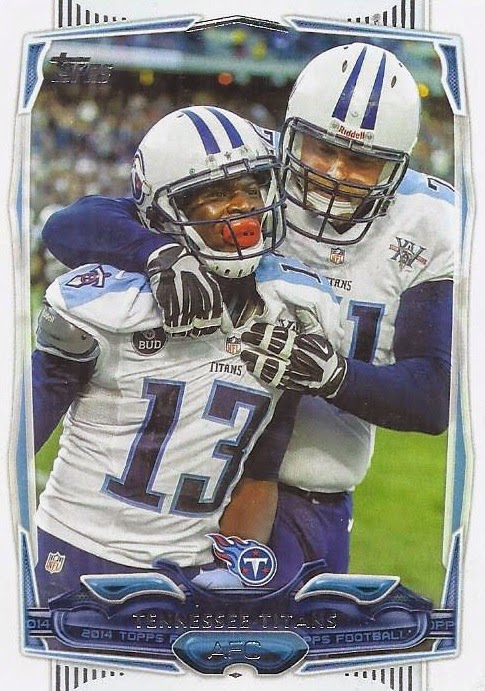 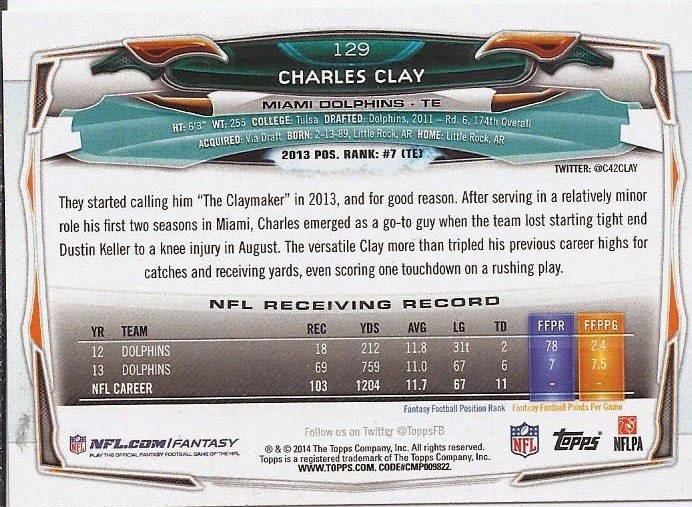 Charles Clay - I guess this is as good a time as any to show the card backs. 2 years of stats gets a slight ugh from me, but twitter handles return in 2014. As someone who really doesn't get into fantasy sports , I could do without the final two columns.
Kenbrell Thompkins
Nick Foles
Vernon Davis
Darrelle Revis
Cecil Shorts
Marvin Jones 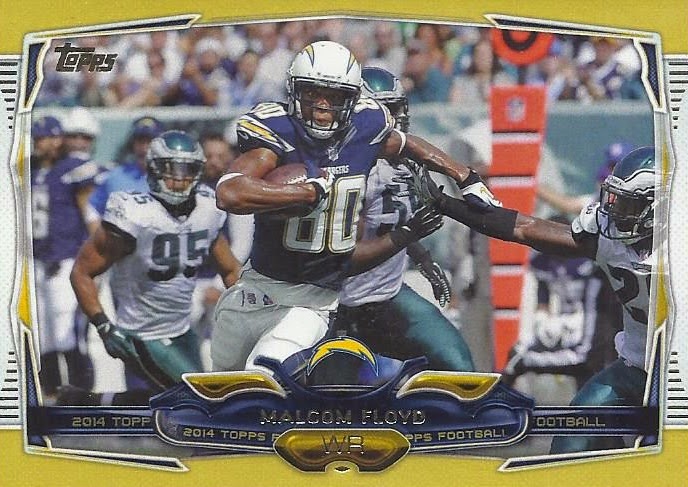 Malcolm Jones - Gold Parallel - Yup, they're in this release too. 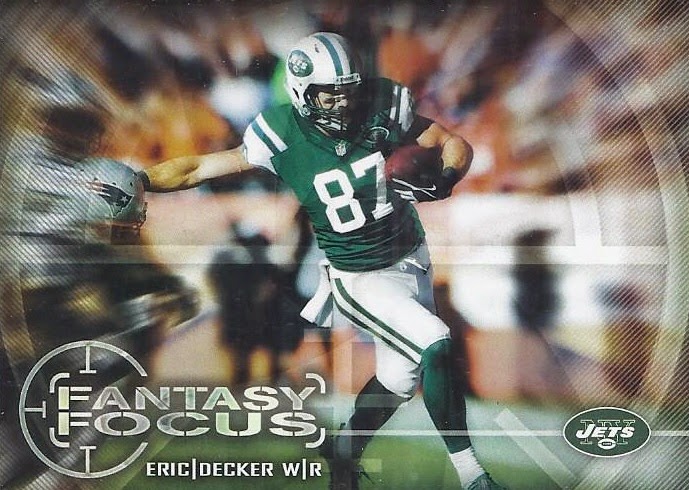 Eric Decker - Fantasy Focus - Neat photo and design, but again, I don't care much for the topic. 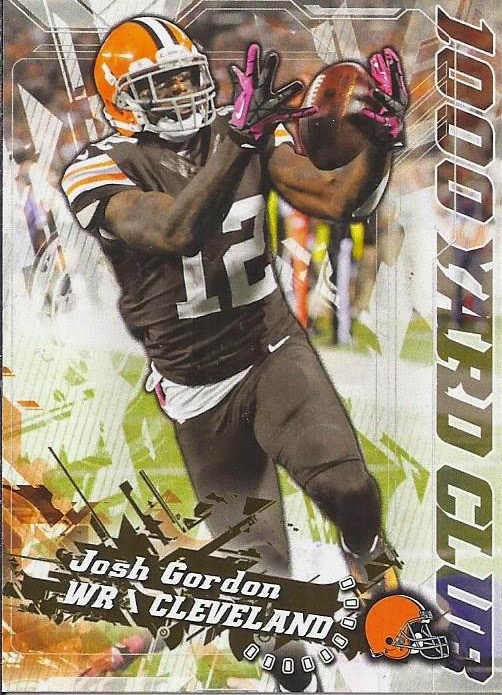 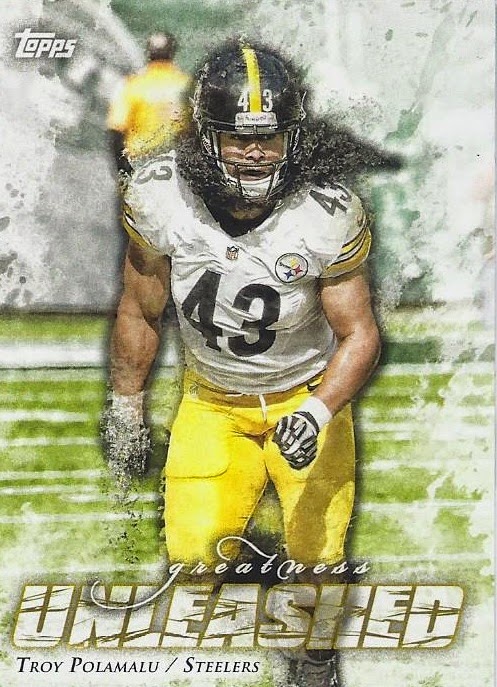 Troy Polamulu - Greatness Unleashed - I don't exactly know why, but I love the look of these.
Davis Dalton - PPK - These are cards of kids. In this case, a 9 year old. While I guess this would be cool to find if you know the kid, I'm old enough to feel like a creep when I saw them. I can't get these out of the house fast enough. 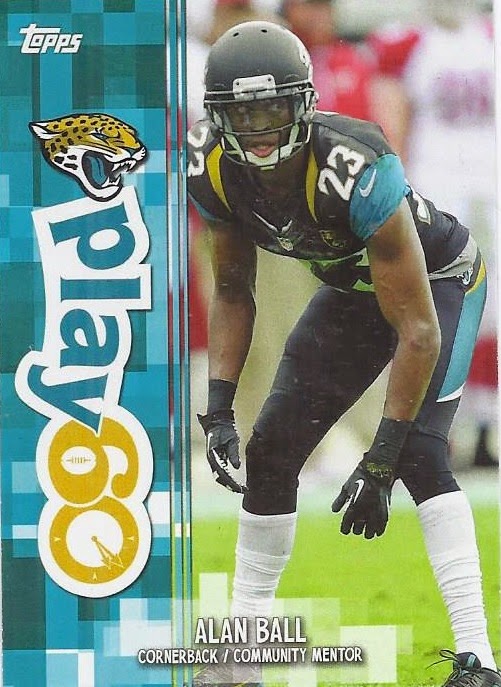 Alan Ball - Play 60. These are in the same vein, but at least they are of players. They have kind of a feel like you'd get from a 90s Triple Play or Studio card, and the ones I've seen are of players that really don't have lots of cards. This I like.

Edit: Despite being in the NFL since 2007, this is the first card of Alan's career. Really cool pull.

Austin Gardner - If anybody outside of their immediate families wants these, I'll PWE them to you. But I'll also send your address to the local police. Hide your laptop! 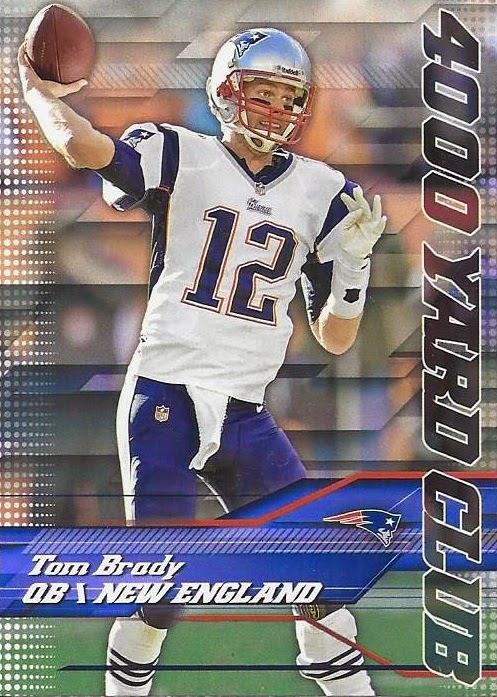 Tom Brady - 4000 Yard Club - It wouldn't be a football break without a card for TMM. 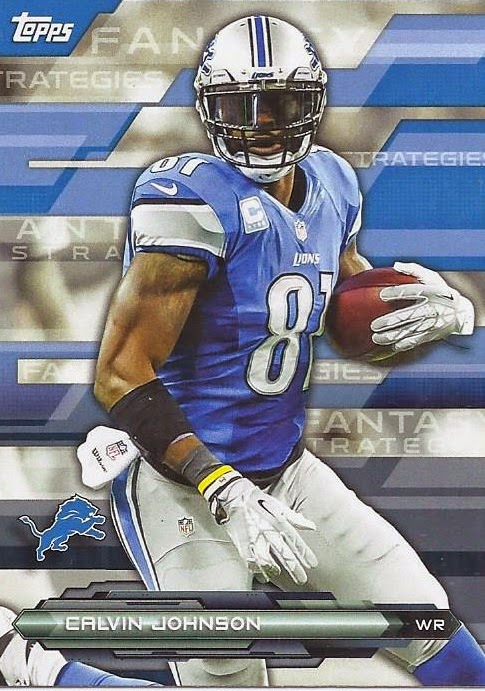 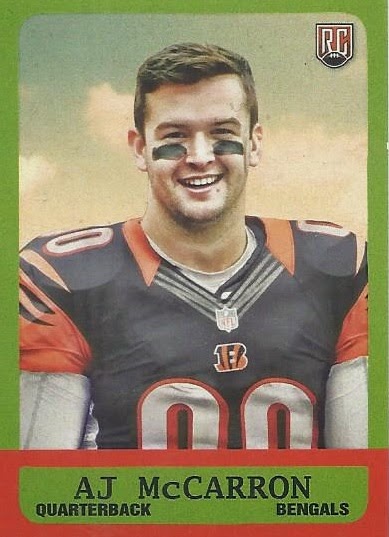 AJ McCarron - 1963 Mini - These are nice. I'll definitely be looking for PC guys in this subset. 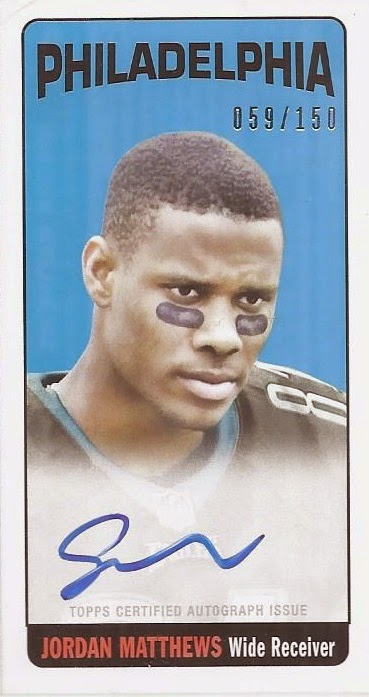 Jordan Matthews - Tall Boy Auto /150.  Recently, I've pulled hits from my first pack of Prestige, my only pack of MVP, and know the first pack goodness continues here with this pull. Jordan's autograph might be terrible, but this is still a good pull. These fall a rate of 1:40, so while it isn't an extremely tough pull, it is still unexpected.

And back to the base to wrap it up.

Antonio Brown - Horizontal cards, although it looks like the aim was off for the stamping of the silver foil.
Jaguars Team
Ravens Team
Le'Veon Bell - Ebay error cards 1/1! 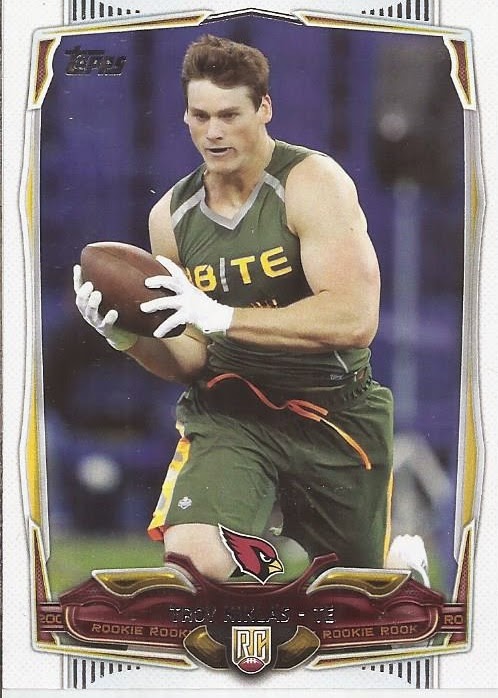 Troy Niklas - And here are the rookie cards to wrap the pack. They are either cards from the combine or the rookie premiere.
Arthur Lynch
Scott Crichton
Trent Murphy
Shaquelle Evans
Marcus Roberson 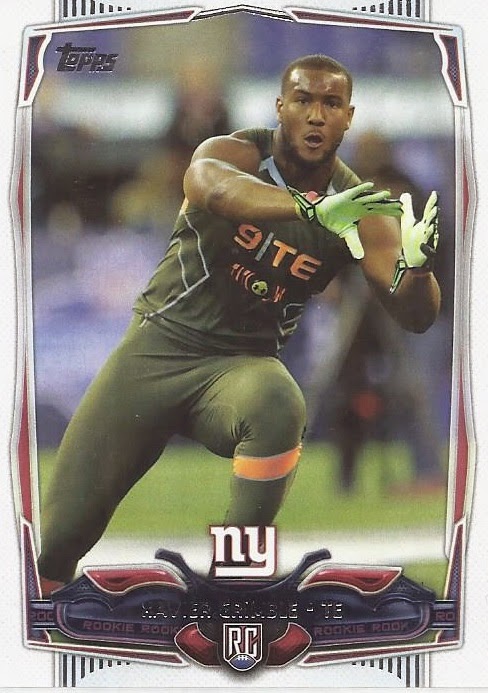 Xavier Grimble - My favourite new name of the year. Mainly because it sounds like a cartoon character. 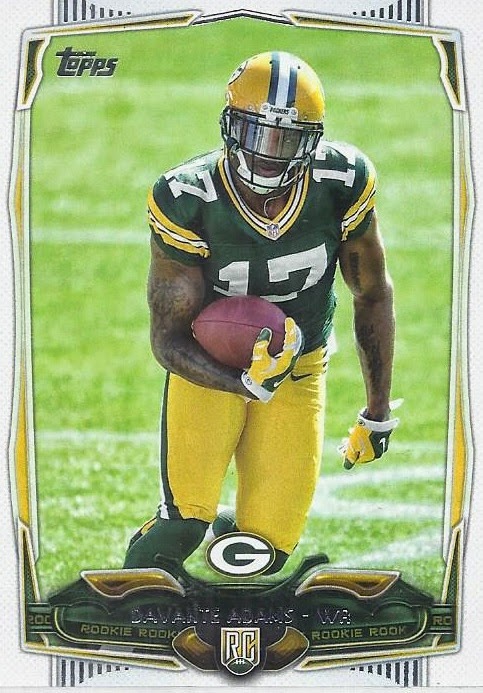 So, no Bills in a pack. Sounds about right for me! A nice start to the set build.
Posted by buckstorecards at 16:19