After acquiring a CJ Leslie card a few weeks ago by accident in a group break, I noted he was on the Raptors D-League team, I made the decision to add non-Raptors cards of players who never managed to get one as a Raptor, but did have one for other teams. So, at least in terms of cardboard, their Raptors history is invisible at this point.

In some cases, their autographed cards weren't that much more expensive than their base cards, so I opted for those instead. This National Treasures card is by far the thickest addition to my collection. He had several cards when he debuted with the Pistons in 14-15, and had a cup of coffee on the D-League Raptors 905. This still counts. 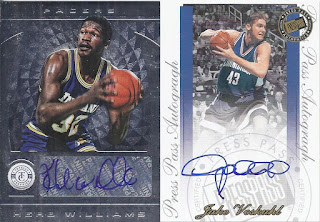 He are two more inexpensive autographs. Herb Williams spent one game with Toronto in their debut season, and then moved on to the Knicks. Voskuhl's career ended with a half-season in Toronto. 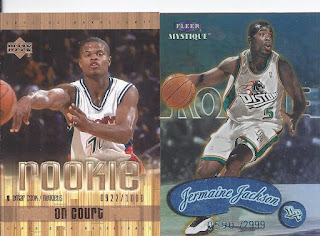 Even a couple numbered cards were in the latest COMC mailer. Omar Cook was a Raptor for 5 games, but the slightly less famous guy named Jermaine Jackson was there for 2 seasons, yet remained cardless. 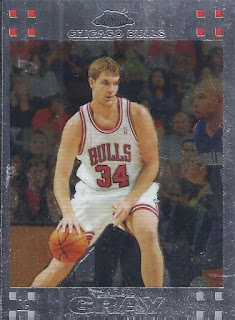 In terms of time in Toronto without a card, Aaron Gray was the winner, so to speak. 2+ seasons in Toronto with 95 game appearances, but no card. He was traded out of town in the deal that sent Rudy Gay to the Kings. 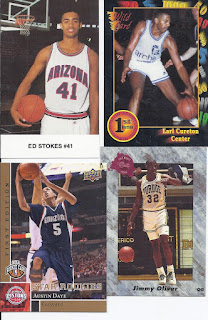 When the price difference wasn't too great, I opted for college cards (or in Earl Cureton's case, a photo from a French league). Ed Stokes is somewhat of an oddball shaped, being taller and narrower than your standard card. His only NBA experience was with the Raptors for 4 games. This card was a Tucson Police giveaway card. None of the players here reached double digit games in a Toronto uniform. 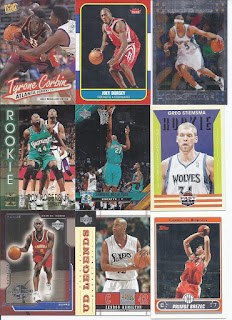 Here's the rest of the cards from my Black Friday COMC mailer. To complete their Raptors games rundown.

I'd already added a Magloire to my CanCon collection, so now I've got a second one for the Raptors binder. MY favourite here is the Roy Rogers, bringing their short-lived Canadian cousins from Vancouver into the collection, along with a barely-awake Greg Stiemsma.

And there you have it.
Posted by buckstorecards at 11:25