Every so often, I do google searches for "Born: February 14" alongside minor and secondary to find people outside the *-reference bubble. The latest brought 3 new names into my collection, each making their one-card debut into the collection. 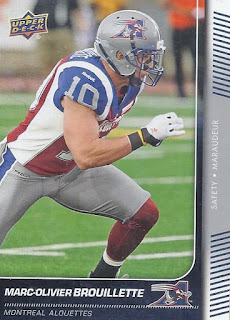 Brouillette debuted at safety (but the French translation of marauder is far cooler) for the Montreal Alouettes in 2010, and is still with the team. He was named an Eastern division All-Star this past season. This card is from 2015 Upper Deck, and is my fourth CFL card in the binder, alongside a Mike Raines from the early 80s, and a pair of mid 00's Bruno Heppels. 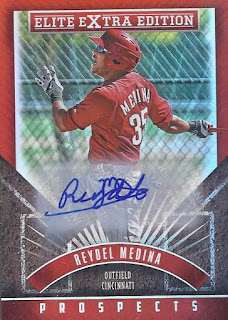 The autographed version of his Elite Extra Edition card was just a bit costlier than his base card from the same set, so I opted for this version. The Cuban prospect has just wrapped up his third season in the Reds system. And boy, has he ever had an interesting journey just to get this far. After reading that article, he seems to be the type of guy you'd want to see have a great career, regardless of which team he plays for. 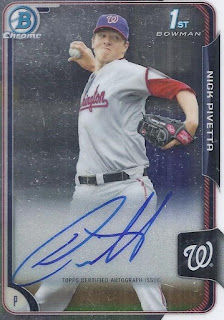 Nick Pivetta would also fit into my CanCon collection, as he's from British Columbia. He's no longer in the Nationals organization, having being traded to the Phillies in the Papelbon trade. He moved up to AAA last season, and was placed on the 40-man roster last month.

3 new faces, and the binder total is now 1499 cards. #1500 to show up in tomorrow's post. appropriately enough, coming from a Dollarama repack!
Posted by buckstorecards at 08:42