At least in Upper Deck card form. I was probably just going to pick up a team set and inserts at some point, but saw the team available cheaply in a case break, and decided I might as well at least take a chance at landing some sort of parallel goodness.

That didn't happen, but at least I now have a lot of base cards from series 1. 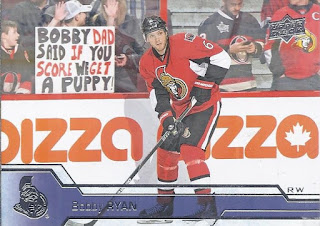 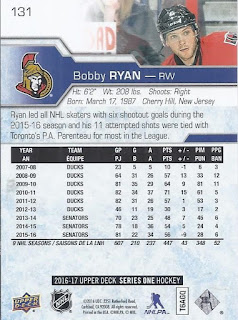 The back should have given some sort of update to the photo showing that yes, that Bobby did score the puppy goal.

And it turns out that UD was also a big fan of the card. 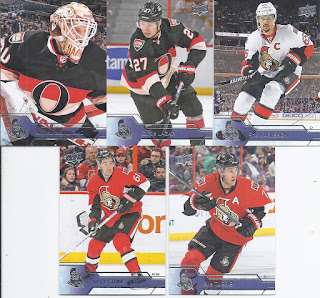 The rest of the base cards. The nice shot of the Hamburglar as well as the low angle on Karlsson are the highlights here. 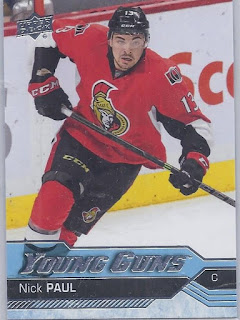 The Sens' only Young Guns card in the set. I'd been using a Team Canada Juniors card as a placeholder until Nick got an actual Senators card. 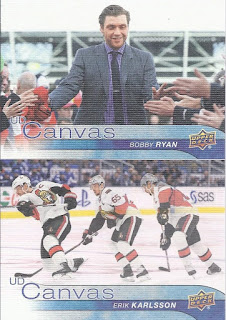 I only got 2 of the 4 canvas inserts, but I'll assume those will be cheaply available once e-packs come out of S1 and they flood COMC with them. I can think of a dime box collector that will be happy to see that multi-image cards have returned to packs, even if they are in hockey. Others given this treatment on the canvas inserts in S1 include Patrick Kane, Nathan MacKinnon and Connor McDavid. 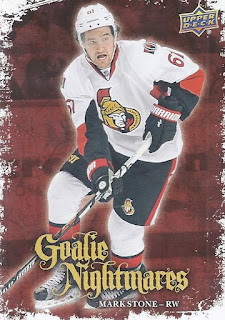 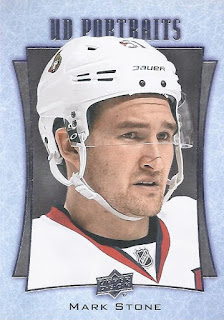 Portraits make a return in this year's release. Pretty generic with the close-ups, although if you look through the cards, there are some nice toothless grins hiding among the set. Drew Doughty's is a thing of beauty. 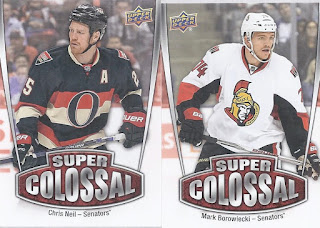 Super Colossal is the final of the insert sets in which I landed a card. They are devoted to the tough guys in the league, and it is nice to add a new card of Borowiecki to my collection. He hasn't been seen in a mainstream set since 2011. The insert set also marks the return to cards of several players who haven't been seen in a bit, such as Dalton Prout and Shawn Thornton.

And there's the newest Sens cards in my collection.
Posted by buckstorecards at 01:42