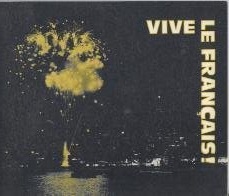 This is not a post about my Grade 6 French textbook. 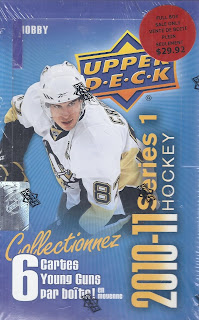 A post about this box I grabbed at Walmart. A $30 hobby box? Beats a blaster, and I should be able to put together most of the set. There wasn't a Series 2 of this, so it shouldn't be too hard to pick up the pieces. 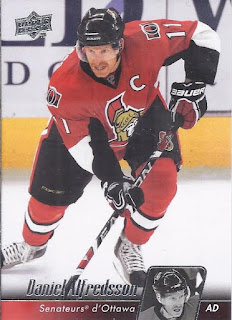 The base cards aren't much different from their English parallels, except these are entirely in French. 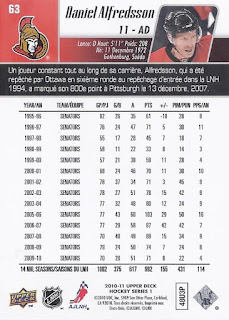 Same for the backs. I learned more French from the backs of hockey and baseball cards than from actual classes. All in all, I ended up with 183 of the base cards with no dupes. The required base cards will probably show up on the set wantlist sooner or later. 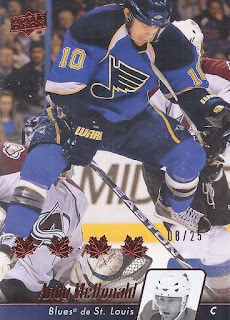 These rather patriotic parallels fell at a rate of 1 per box. While I didn't really land a marquee player, I did land an interesting photo since neither of McDonald's feet are touching the ice. 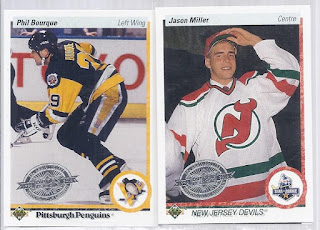 And a pair of buybacks. One English (Bourque), one French (Miller). Bourque carved out a journeyman career on this side of the Atlantic, while Miller played 6 games total with the Devils, but had a lengthy run in Germany.

There were no inserts in the set other than those two buybacks and the parallel, which can make for a dull break. Fortunately, I can still be on the lookout for Jeunes Lanceurs. And this isn't too bad of a year to hunt them. Some of the names include PK Subban, Sergei Bobrovsky, Taylor Hall, Nazem Kadri, Jeff Skinner and Jordan Eberle. 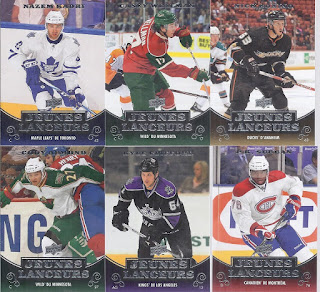 And I landed two of those 6. Of this grouping, only the Minnesota Wild players are not active on this side of the Atlantic now. Kadri will be a nice addition to my collection of Kitchener Rangers alum. Bonino helped bring the Stanley Cup to Pittsburgh last season as the B in the HBK line. Kyle Clifford has a pair of rings himself while with the Kings, and that Subban should pay for the box.

Pretty successful box break, and far better on the whole than the box I decided to treat myself to as a Boxing Day gift for myself.
Posted by buckstorecards at 12:13