I've been doing challenges, and selling cards at COMC for ages. Time to make some good from it and go crazy with some busting by cashing in some of the credit for Blowout Cards. So, at intervals throughout December, I'll be showing off the goodies from these.

First up, the only baseball box: 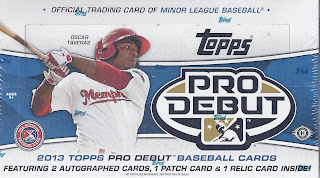 I had some base cards around, and figured I'd try to put the set together. All told, with those, this box, and some COMC Black Friday purchases, I'm now 3 cards away from this base set, and those 3 are on my Set Wantlist at the side. 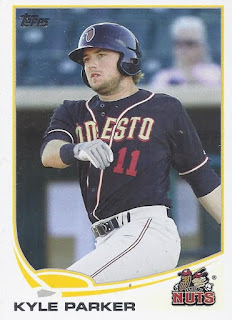 I shouldn't really need to scan the base for these - if you've seen the flagship, you know what these look like. Still, I gotta show off the Modesto Nuts logo. 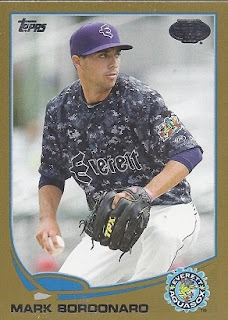 There is one gold parallel /50 per box - and this was it. I had never heard of Mark Bordonaro before seeing this card. He was a 25th rounder, and doesn't appear to have played past 2014. 2013 Pro Debut was also the only product where he had cards. So there is that. 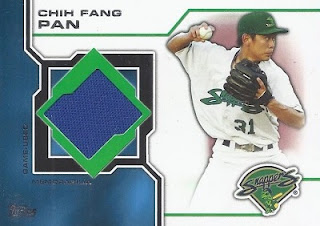 Another player who hasn't seen much action lately. He played a handful of games for a the Stockton Ports in 2015, and that's it. 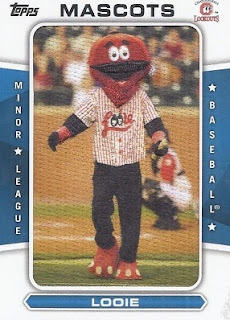 If I'm gonna get a manufactured patch, please let it be a fun one like a mascot. 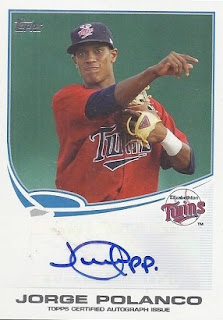 In terms of players, things pick up a bit with the first autograph. He's seen the big leagues! That's always good. 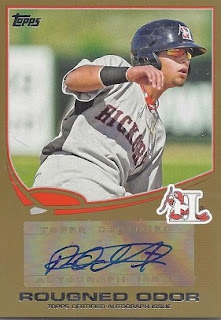 I'm guessing that if I were not a Jays fan, I'd be a lot happier with this /50 pull. But at least this isn't the other Rougned Odor. "I'm Larry. This is my brother Rougned, and my other brother Rougned." 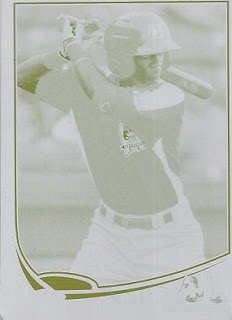 I guess this box probably should have been shipped to Texas, as both my big pulls were Texas Rangers prospects at the time. Here's the yellow printing plate for Luis Sardinas, then on the Hickory Crawdads. As soon as I picked this pack up, I felt something was a little different about it. I guess the metal really is noticeable when you're working your way through a bunch of cards.

Anyhow, there's the only baseball of the group. But lots more still to go!
Posted by buckstorecards at 07:32