One Card Only - Surprise Mailday!

Yesterday, a rather bland yellow envelope arrived. I wasn't too sure as to where it was from at first, but eventually recognized the return address as being from Upper Deck.

I had a pair of outstanding redemptions from them, but both of those were 16-17 Artifacts rookies, and despite their announcement as to which player would be featured on them, I knew they couldn't have produced the cards already.

So what was in this envelope? 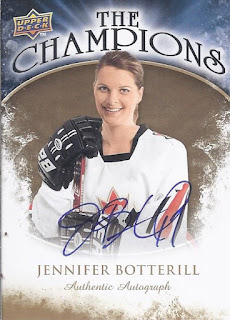 OK? I knew this wasn't a redemption that was outstanding for me. There was nothing else in the envelope other than this card. So, what was this for?

And then I figured it out.

I turned in an expired redemption for the raffle at the Expo last month. I guess this is what I wound up with. These were from 2009's UD flagship release, so I guess I should be happy I didn't have to blow the dust off the holder.

Anyhow, this is my second autograph of her, and this one's on card, unlike the first. This replaces an expired PK Subban auto that came my way in a group break. At least I can say she has more gold medals than PK.
Posted by buckstorecards at 06:58