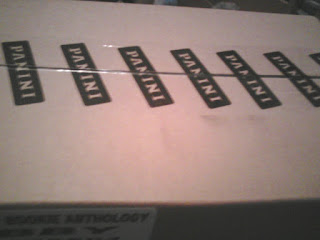 So, there we are. And it looks like I'll be leading with the worst box of the break. That's the way things the randomizer fell. 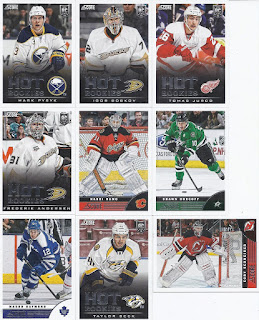 I decided that I would go for the Score base set out of this, seeing as there are about 8 per box, I figured that would wipe out most of the set. And, when combined with the cards I already had, I now have all but 3 of the cards. With a trip through COMC, only the Jagr is needed now to wrap it up. As for this group, a couple alternate jerseys are the big highlight here. 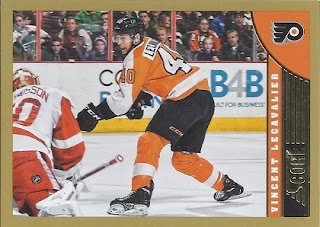 I thought the golds were one per box, but a couple of these lacked the gold parallel. This probably didn't need to be a horizontal photo, but seeing the goalie's save attempt(?) is something different on a non-goaltender card.

There's a decent rookie to get with Martin Jones.

There's the second appearance of the Leafs third jersey. 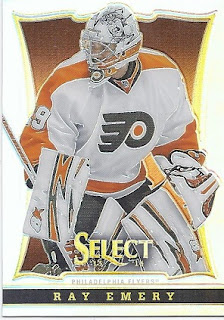 A nice shiny look at Ray Emery and his Flyer theme mask from his second go-around in Philly. 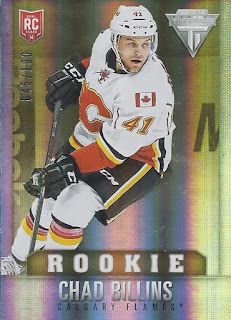 This gold foil card is the draft parallel, numbered to his draft position or #100, whichever is lower. Chad was undrafted, and since they couldn't number it to zero, it is /100. He had 10 games with the Flames, and is now in the Canucks system. 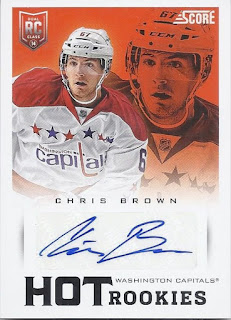 A dupe of a card that I'd already sent one copy of to Dennis @ Too Many Manninghams. Now I have my own copy. Yay? 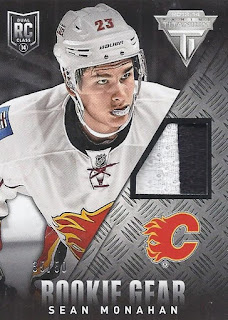 Back to Titanium inserts with this thick prime Sean Monahan relic. Monahan was one of the 3 Score update cards that I didn't have after the case break, but that was remedied via COMC. 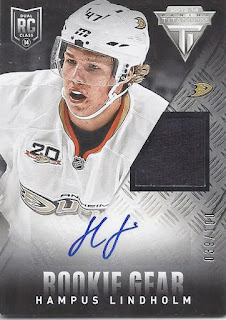 Probably the best card in this box break.

And that's it for the fifth/first box. No Rookie Selection auto/dual relic, which I thought were guaranteed. Ouch. If this were my first box period of the product, it would likely also be the last I'd bust. Fortunately, things get better from here on in.
Posted by buckstorecards at 05:59