Time to show off some group break goodies. I jumped into one on Black Friday over at mojobreak, hoping to get some oddness from the packs. This included boxes from the new Playoff release, as well as Panini Signatures. I landed the Raiders in the random, and that had me thinking I'd be able to land some nice base cards of Karl Joseph and Bruce Irvin for the Mountaineers collector on my trade list, along with some Amari Cooper for the Tide collector. 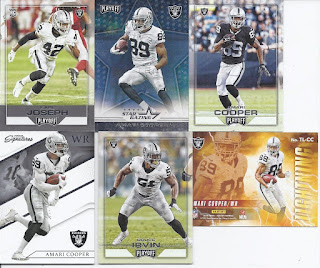 And it looks like I did. I really like the base design of the Signatures cards. They remind me of something you'd see from SP Authentic hockey with the team colour stripe. The horizontal card has Derek Carr as the Thunder to go with the Lightning. 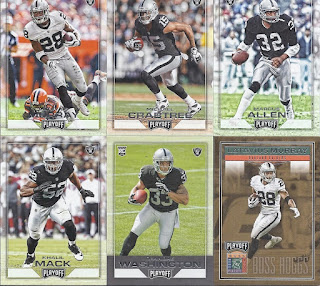 Here's the rest of the team base, along with the only other insert I landed. 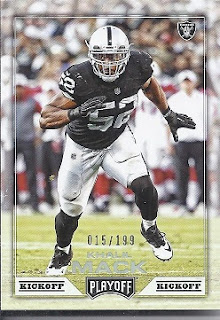 And the only parallel I got. 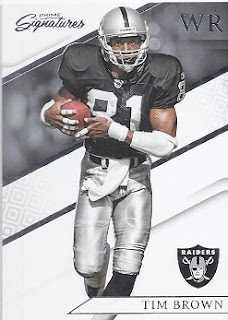 I did manage one more base card from Signatures, this really nice Tim Brown.

Off to the hits, both of which came from Signatures. 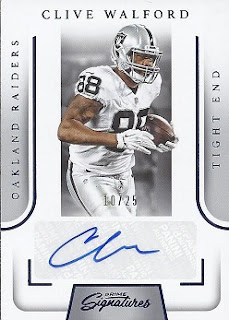 First up, a blue parallel of Clive Walford. He's seen some action this year, but Amari Cooper is obviously their #1 choice for receiving targets. 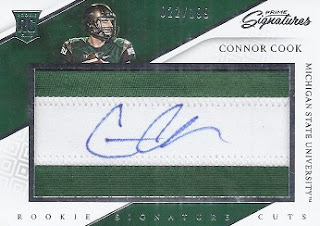 And an on-manupatch auto that might qualify as the card that I'd be least likely to send to Too Many Manninghams.

And now, time for the black Friday cards.

The base cards start off. If you don't immediately realize that the kicker card is my favourite of this bunch, you must be new here. 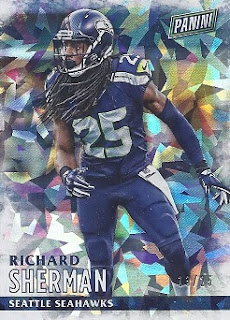 Not a hit, but these Cracked Ice parallels always look nice. 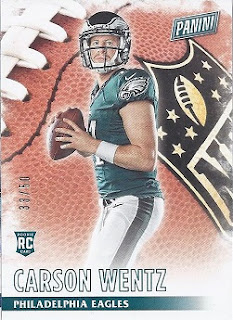 And now, a pair of the cards indicated by the title of this post. This card /50 is quite thick, and Panini has been using these as dummy cards in the 2-card packs for a bit, and started numbering them. This card has already been set aside for my next Cards on Cards mailing. 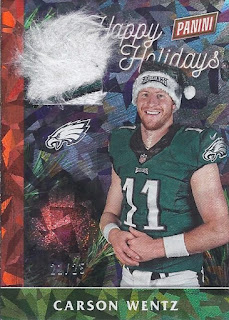 Finally, the big card for me. My collection oddness comes through here, with this Santa hat relic easily being my favourite from the break. They're pure gimmick, and I love it. I've tried to add one these each of the past few seasons to my collection, and it was nice to get this out of the way without a trip to ebay. And the fluffier the swatch the better!

That sounded wrong. I should probably stop.
Posted by buckstorecards at 12:22