Time for one of numerous breaks I'll be taking as I work my way through my case of cards. This break will take the time to show off Bills cards from three different mojobreak breaks. 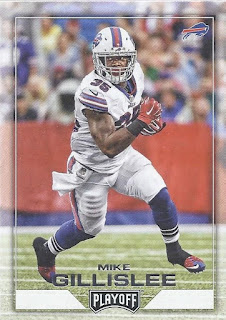 I should have known better than to grab the Bills in a release called Playoff. Those haven't gone together for more than 16 years. But, on the plus side, it did add my first Bills card of short-yardage specialist Mike Gillislee to my collection. 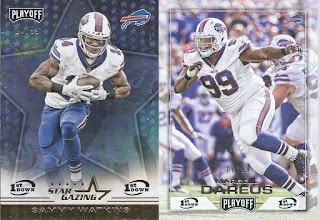 This was as close as I got to hits - these /99 parallels, one from an insert set, one from the base cards. 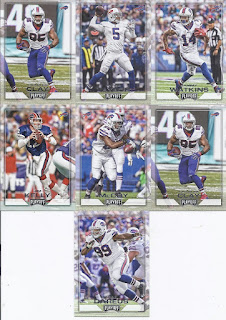 Here are the rest of the base cards. I ended up with 4 team sets out of this. Since I have three Bills collectors on my tradelists, I'll be adding these to future mailers. And there's a bonus Jim Kelly as well for the 2/14 binder. 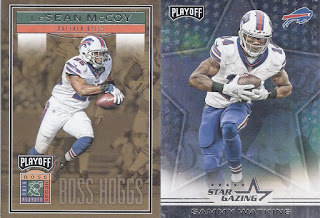 I also landed enough of these two inserts to add them to the trade packages as well. But, at least I've added some volume to my binders.

Off to a second, smaller 3 box mix that included 2016 Prizm, Spectra and Phoenix. 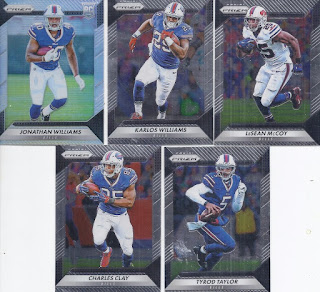 The base cards. Pretty much the expected players from an early season release. 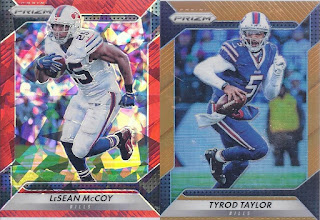 But in one box, I landed more numbered parallels than in an entire case of Playoff. The orange Tyrod is /299, while the cracked ice of McCoy is /75.

Some more base cards from Phoenix. There's Jim Kelly #2 in this post. They really aren't as bright as they seem in this scan. There's just a slight shininess to the background, and the white portion of it is just a regular non-shiny background. 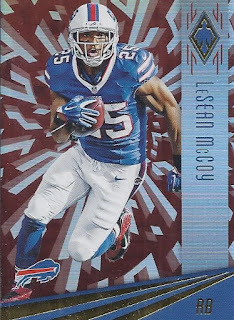 Here's an unnumbered parallel that better shows how the portion of the background that looks like it should be shiny isn't. 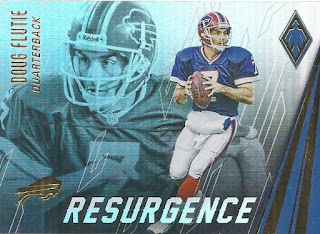 And an insert. This commemorates players who had memorable comebacks in their careers. Flutie's salutes his return from the CFL. 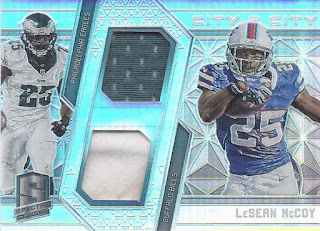 Spectra only landed me one card, and I really like that there is some very visible game use on the Bills patch. I think this is my first football swatch with that feature. 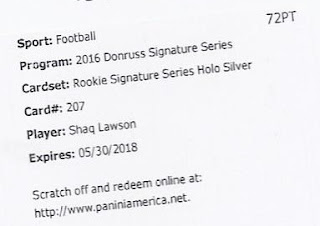 My first Shaq Lawson auto! Eventually. This should be /50 if/when it comes through. I now have five autos of the first five 2016 Bills draftees, and just need a pair of sixth rounders, Kolby Listenbee and Kevon Seymour to finish the Frankenset. Neither should be too costly. 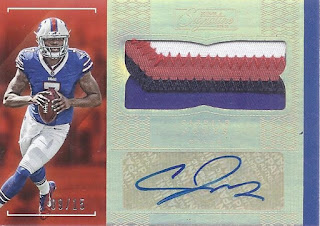 But here's an actual card that I don't have to redeem. I've now landed RPA's for both the Bills Rookie Premiere guys, both of which are 4-colour patches as well. This is my second Cardale graph, but my first was on an Ohio State insert, so it is nice to add a Bills one to my binders.

And there you have a post as the team plays out the string yet another playoff-less season.
Posted by buckstorecards at 08:13