Bills Goodies from a Long Ago Group Break

And by long ago, I mean last November. But, since I never showed these off then, opening day seems like a good time to do so. I grabbed a slot in a random half-case break of '13 Sterling back then through mojobreak, and luck was on my side as I got the Bills through the ol' randomizer. The Bills were actually pretty loaded in last year's release, since they had three guys at the rookie premiere, all of whom you'll see at least one card of. 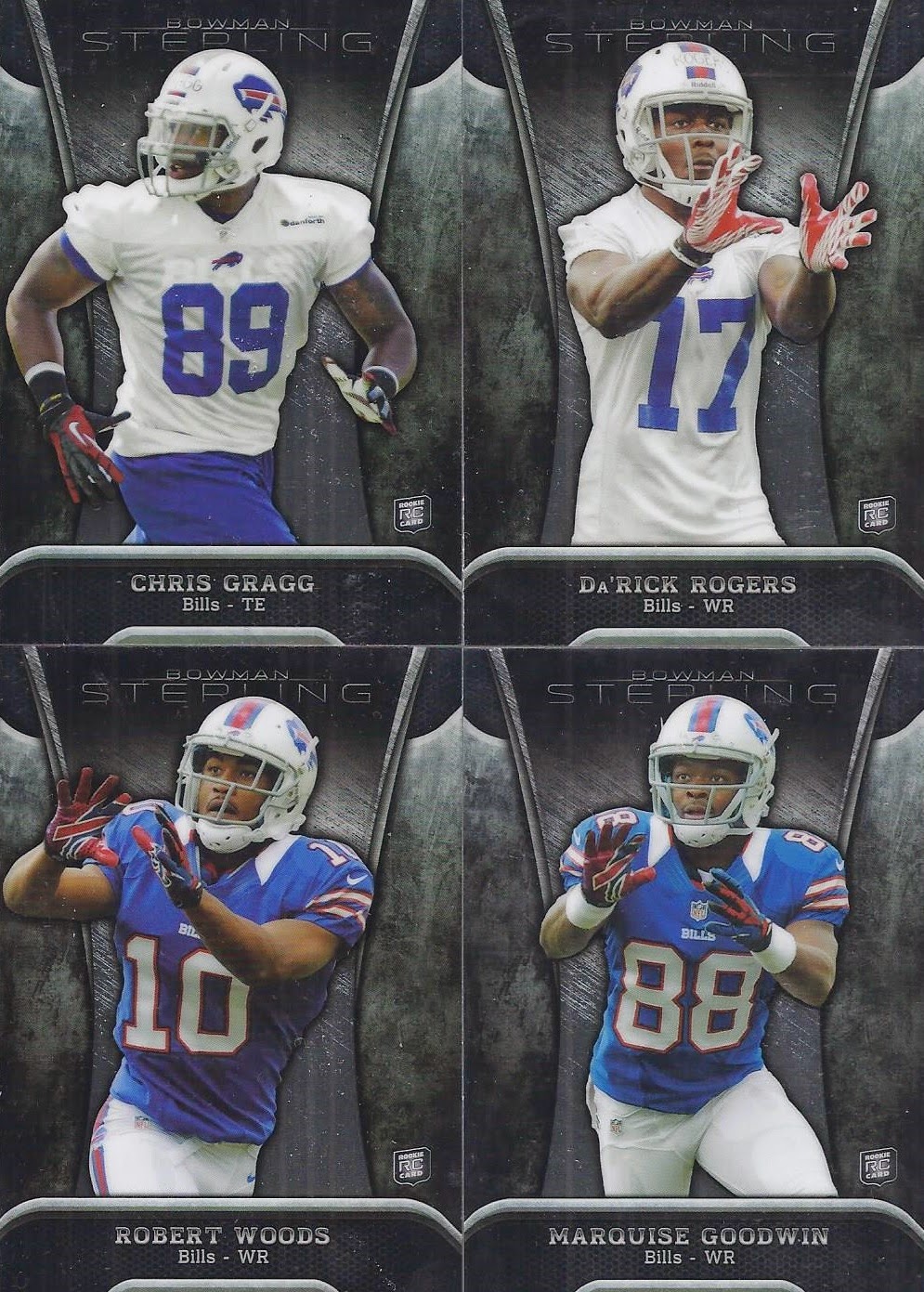 The Bills had 5 cards in the base set. Considering there were 3 base (incl. parallels) per pack, with 6 packs per box and 4 boxes total, I did pretty well grabbing 4 of the 5, missing on the EJ. I'd criticize them with hindsight on including Rogers or Gragg over Kiko. These feature the only appearance in this break of Chris Gragg and Marquise Goodwin, although I'd acquire their hits at a later date. 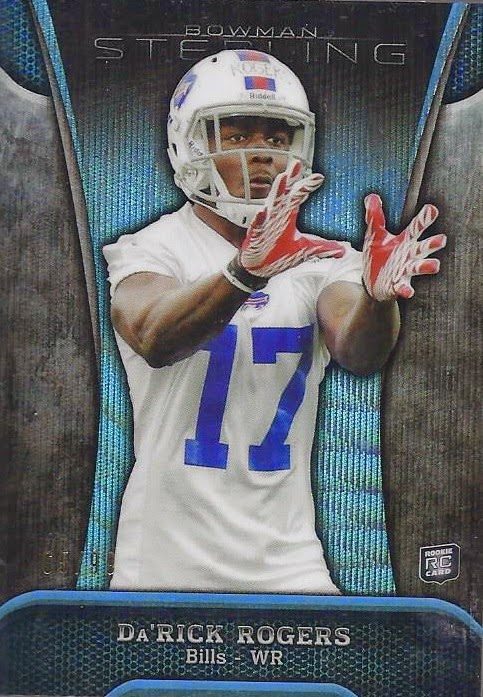 Speaking of the parallels, her's one of the Blue Wave ones, with a Da'Rick numbered to 99. 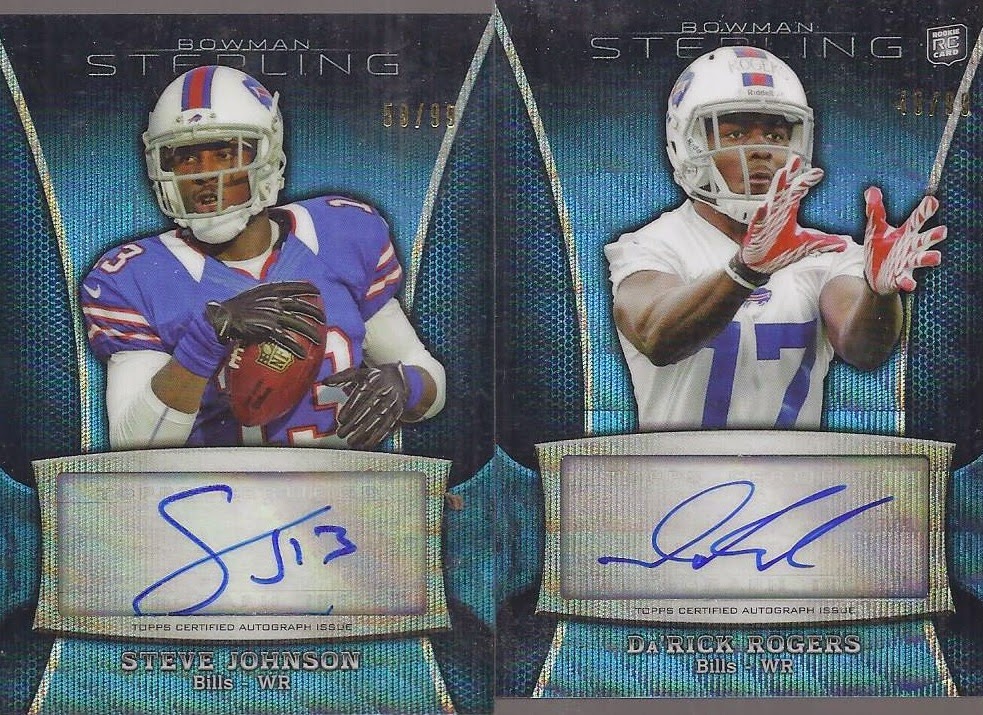 Since you likely can't get enough of that photo of Da'Rick Rogers, here's a third appearance of it, this time with a stickergraph attached. This does seem to be the right time to point out that Rogers played no regular season games for Buffalo, but has caught on with the Colts. The photo of Stevie Johnson is a really rare one - as he's shown actually holding on to the football. Thankfully, he'll be giving heart attacks to 49ers fans this season when Colin throws that key pass in his direction. Both of these are /99. 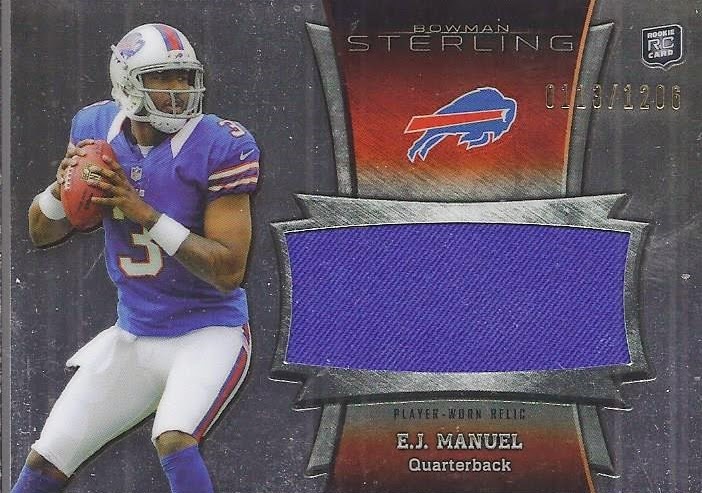 This might not be the most spectacular relic of EJ Manuel, numbered to /1206, but is a nice looking swatch, since the blue coordinates nice with the photo choice. And how can I hate a relic of the latest QB of the future in Buffalo? Give me another two years and I might have an answer to that on par with what I think of Losman, Edwards, Fitzpatrick, Rob Johnson and the rest of the cavalcade of misery QB carousel. 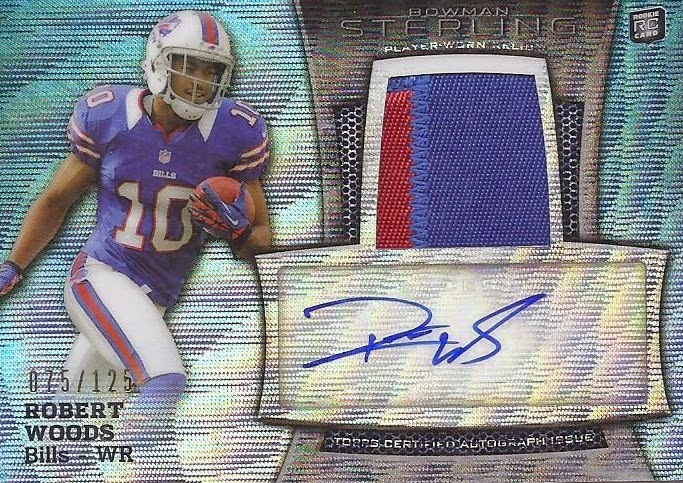 Here's a smaller, but nicer relic featuring two colours and a hint of a patch, combined with a Robert Woods auto. This is one of 4 Robert Woods hits in my collection from last season. A relic from Topps flagship. An auto-relic from Rookies & Stars. The auto/relic you see above... 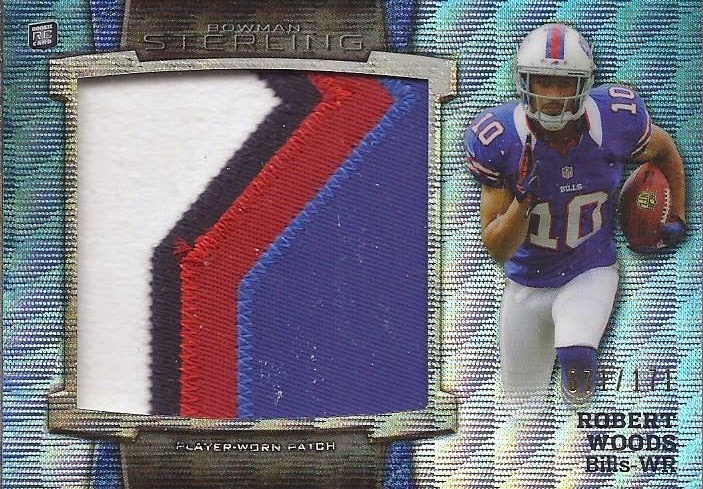 And this jumbo box topper patch. This is what a jumbo patch should look like. 4 colours, and a patch cut so sharp you could shank someone with it. Just beautiful, and I love that the strange numbering of the card has it limited to just 171 copies. 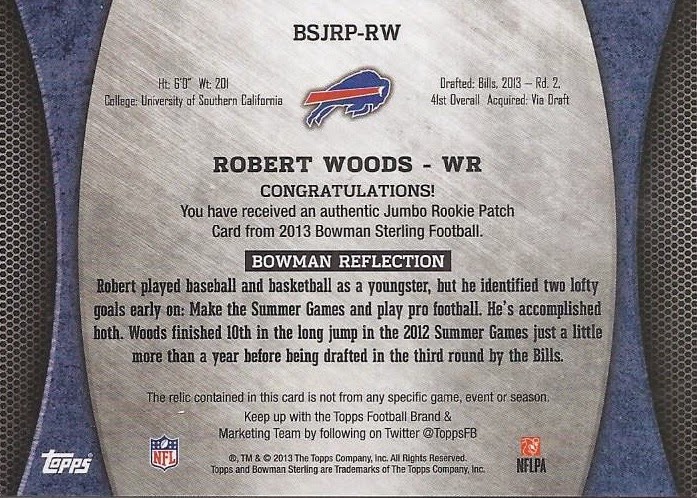 But do note there is an uncorrected error on the back, as the write-up applies to Marquise Goodwin - not Robert Woods. Oops! 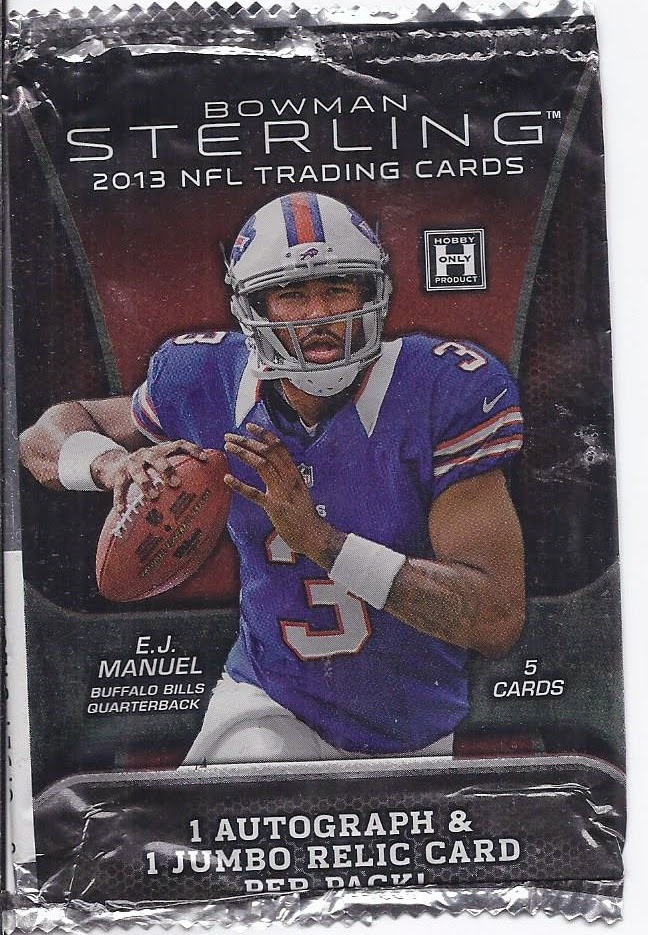 I even got them to throw in a couple empty packs - thanks to the cover boy.

While I probably did financially better with other breaks, I certainly made my money back with this and added some beautiful Bills cards to my collection.

And now, on with the season and the misery of being a Bills fan.
Posted by buckstorecards at 06:53