Let's wrap up this box. I've posted a lot of scans, so I'll try to keep these ones to a minimum in this one. Plus, I still have a blaster worth of cards that I grabbed yesterday to work through. 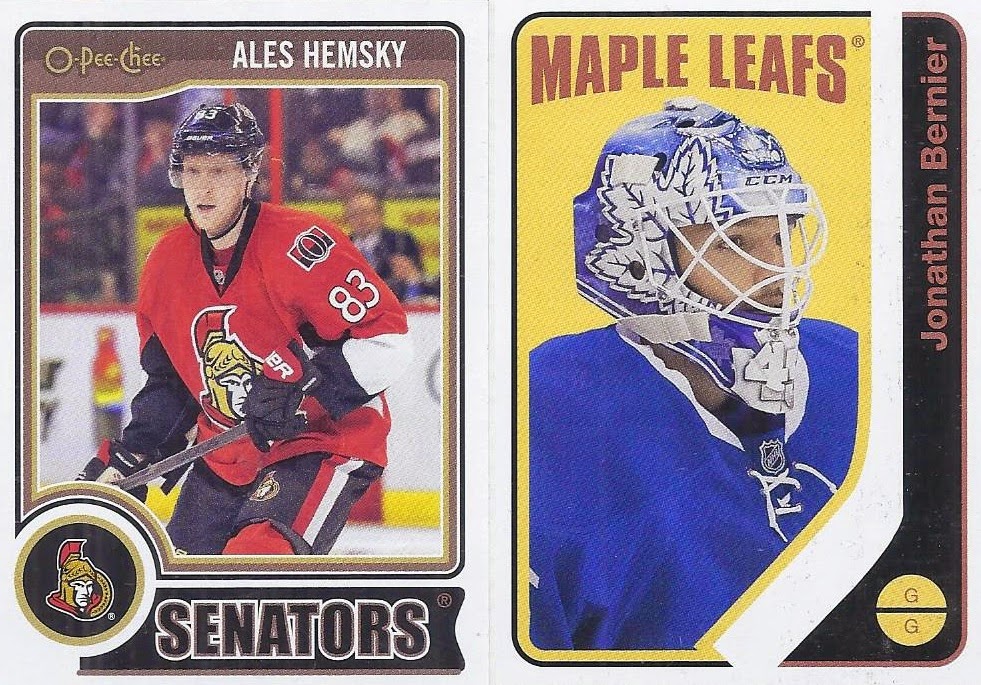 Nice to start this with a Senator card, especially since Hemsky won't have too many as a Senator. Bernier is a mask binder certainty. 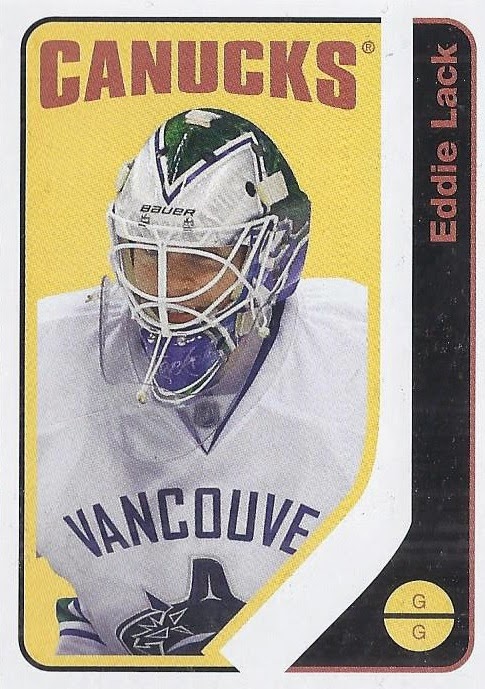 Back-to-back packs that result in a retro card in the mask binder is a good start to the final quarter. Winchester and Peverly are my first dupes of a non-SP card. 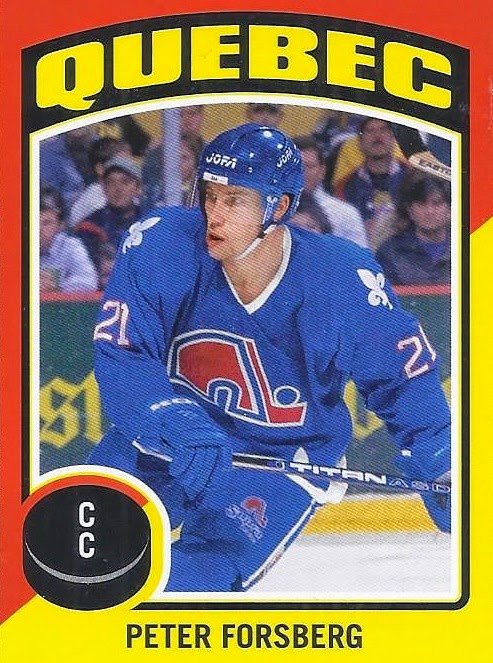 The Sutter is a dupe, but it is a 2/14 dupe. Those are the dupes I want to find. As for the sticker, nice to see the appearance of the classic blue Nordiques uniforms. 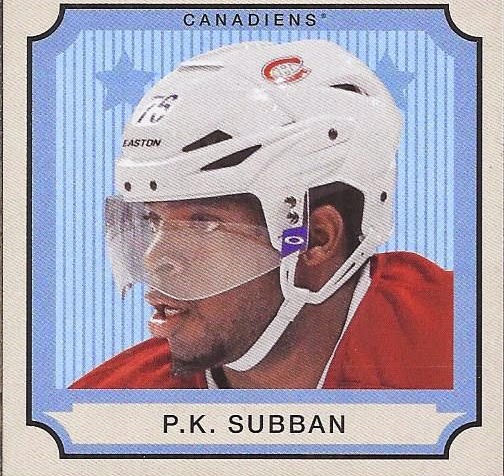 And here's my second VsA/mini.  Ovie and Subban are a pretty good 1-2 punch for these cards. 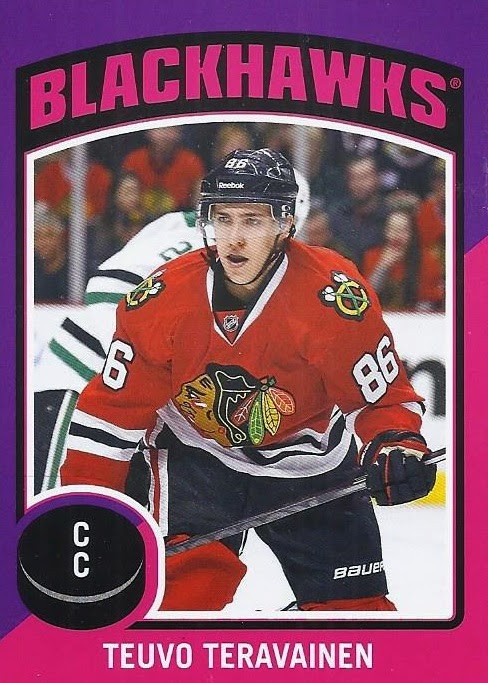 Teuvo is one of the rookies they're pushing to sell this year's products. I guess that's the best pull in this pack. 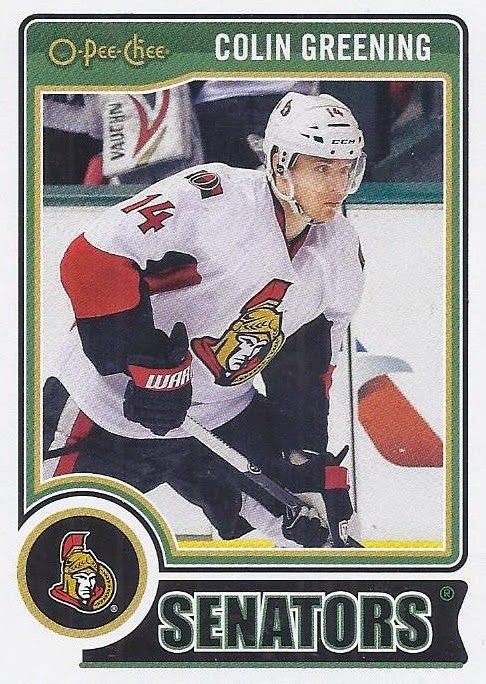 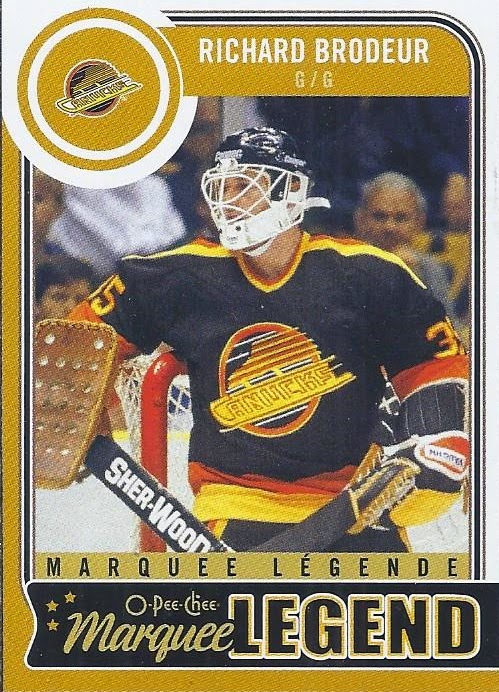 An interesting pack for my second last one. Barkov's rainbow makes him the second guy I've got the base, retro and rainbow of. He joins Nail Yakupov in that category.

But the win in this pack goes to the Brodeur. He's shown up in this portion of the OPC set in recent years, but he still counts as someone who is fun to pull. My only complaint is that it doens't feature the Flying V jersey.

And the final pack is even better. A 2/14 card opens, and it wraps up with a sticker (numbered ST-25, of course) and a masked retro card.

And that closes up the hobby box of O-Pee-Chee. It is a good start and put a nice dent in the set for me. No dupes in the box - also good, but I did end up with a few out of my previous pack busts. I'll probably be going with retail the rest of the way home - I spotted rack packs and blasters in the store yesterday, and picked up one of the latter.

I'll be sharing the results of that blaster break sometime tomorrow.
Posted by buckstorecards at 07:17