I picked the box up almost a week ago. Time to finally start showing off the goodies. 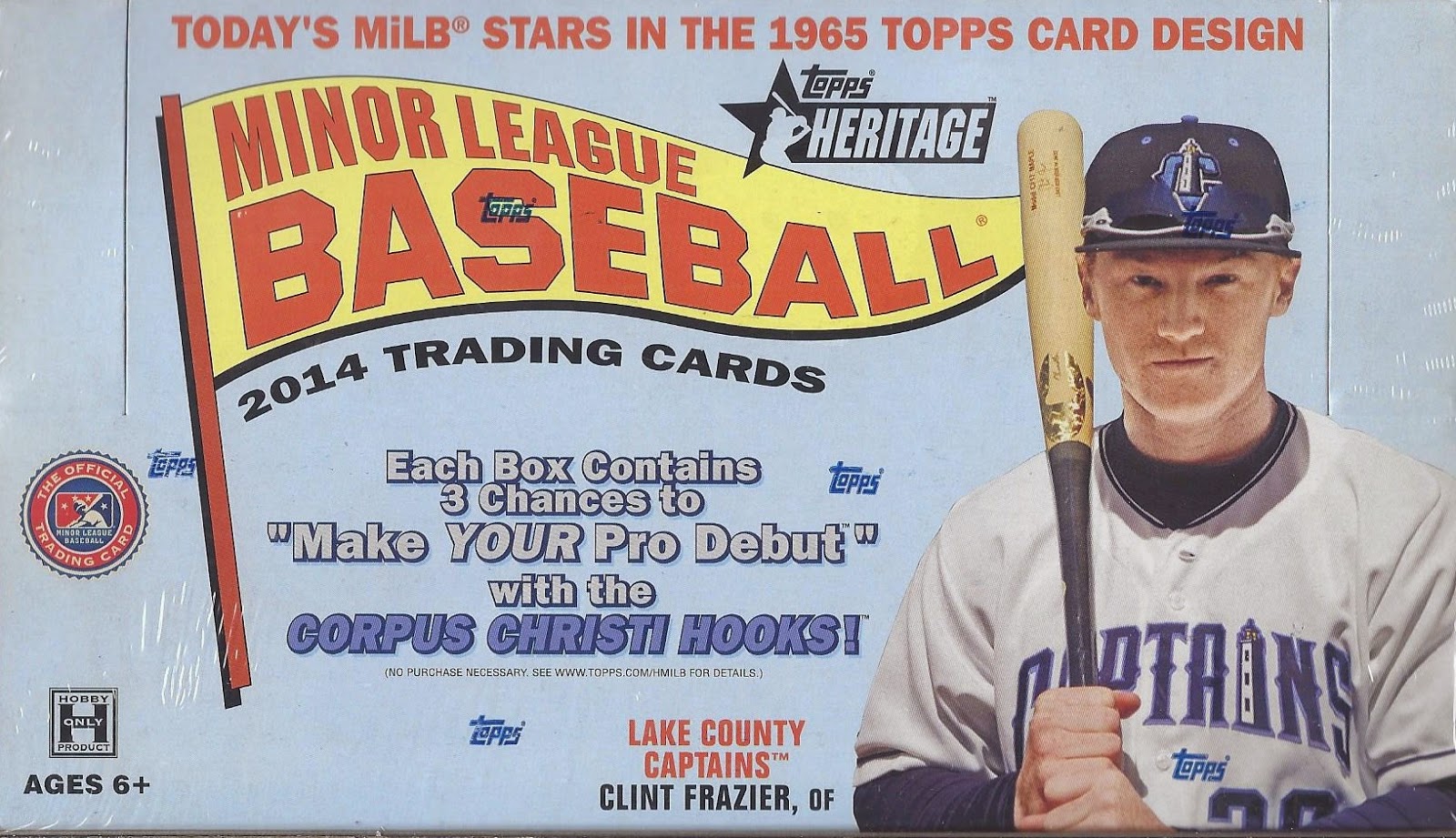 Here's the box. I always like seeing players on the packaging. 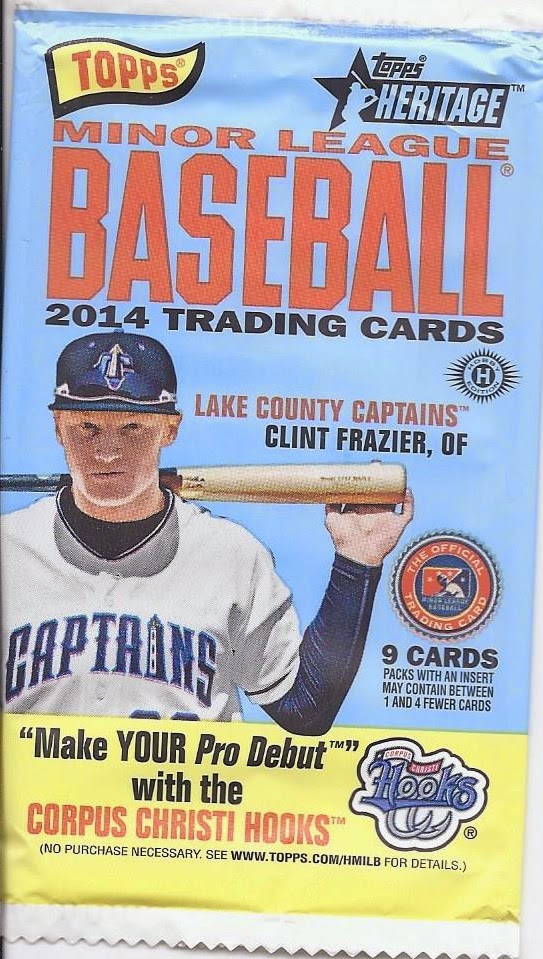 But since the pack of the flagship Heritage didn't have anyone on the packaging, it was nice to see it used on the Minors pack. And the photo isn't reused! 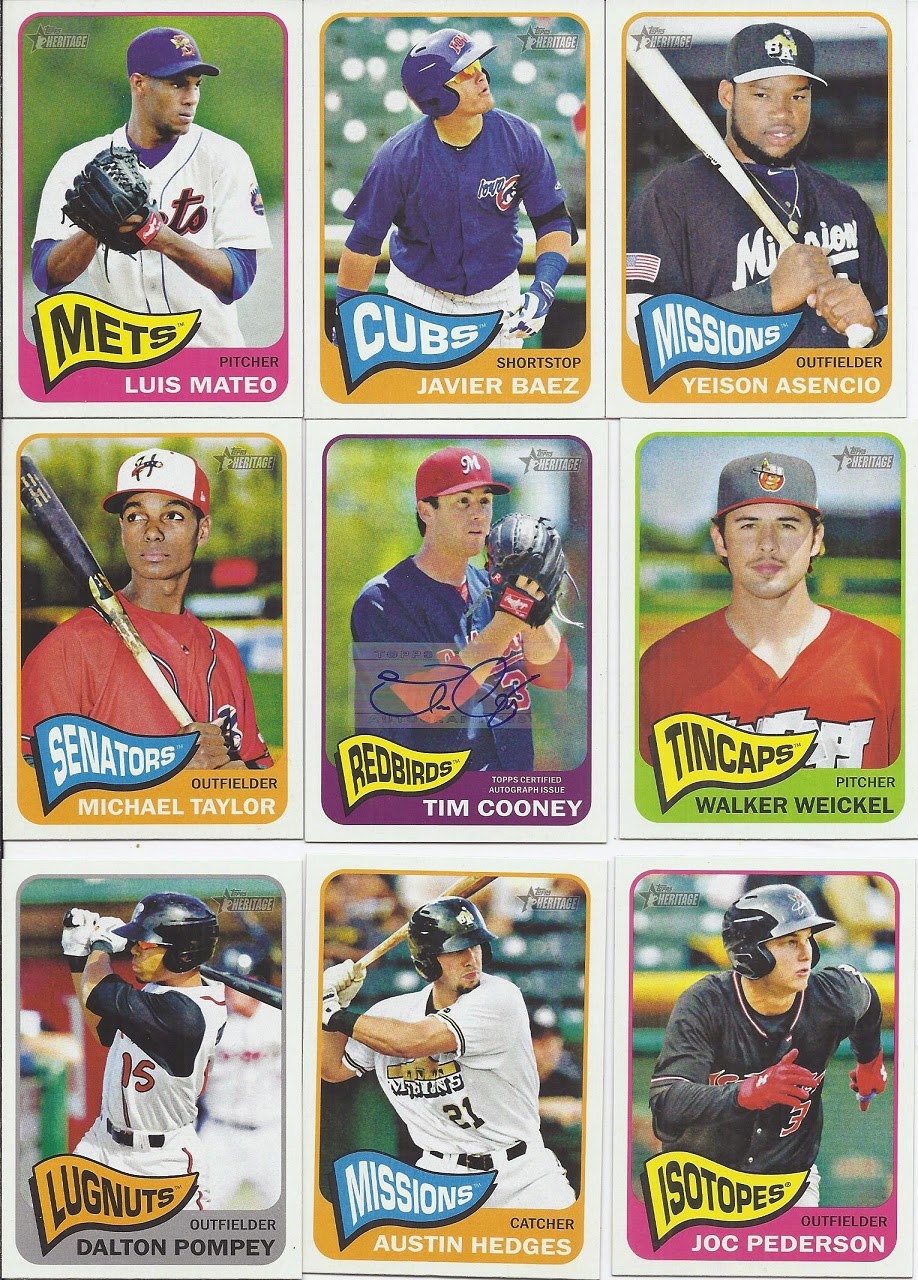 Pack 1 - OK. Time ot start digging into the packs. The first card out for me being a Met is a nice start for me in this break. Also a Blue Jay makes an appearance with the Dalton Pompey. Dalton just made his debut for the big club, and already has a home run and a highlight reel catch to his credit. And 1 of my 2 promised autographs as well. I was hoping that I'd build to those pulls. I was disappointed that the minor league logos aren't on the pennants in this design, but photos do allow for their appearances, such as on the Weickel. 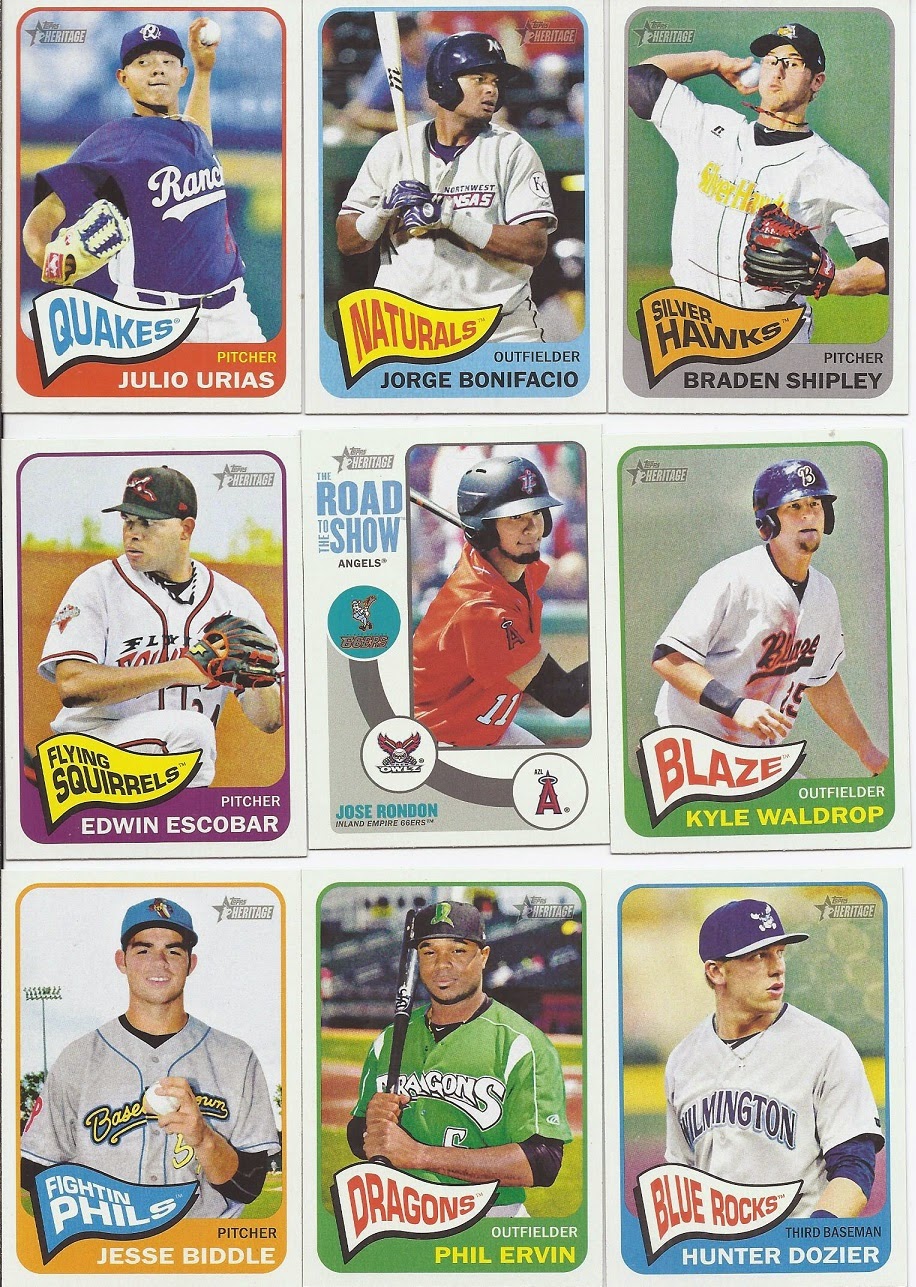 Pack 2 - Not as much interesting stuff in this one, but I like seeing them fit the Flying Squirrels on the pennant. The Road to the Show cards also continue from last year. Although the logos are smaller than last year, I like that it is a road this year as opposed to just sticking the logos around a diamond like last year. 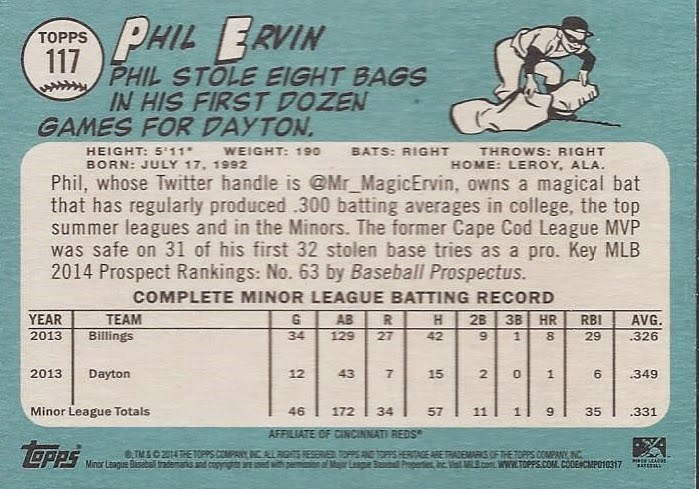 This would be a good time to show the backs of the cards. Considering the scratch off trivia didn't make the move last year from the majors to the minors, it is nice to see the cartoons move over this year. That isn't why I opted for this back though. It is because the write-up made me think of a Simpsons-ism.

Lenny: Yeah, well, I've got a magic bat, too!
Carl: And I got an enchanted jock strap! 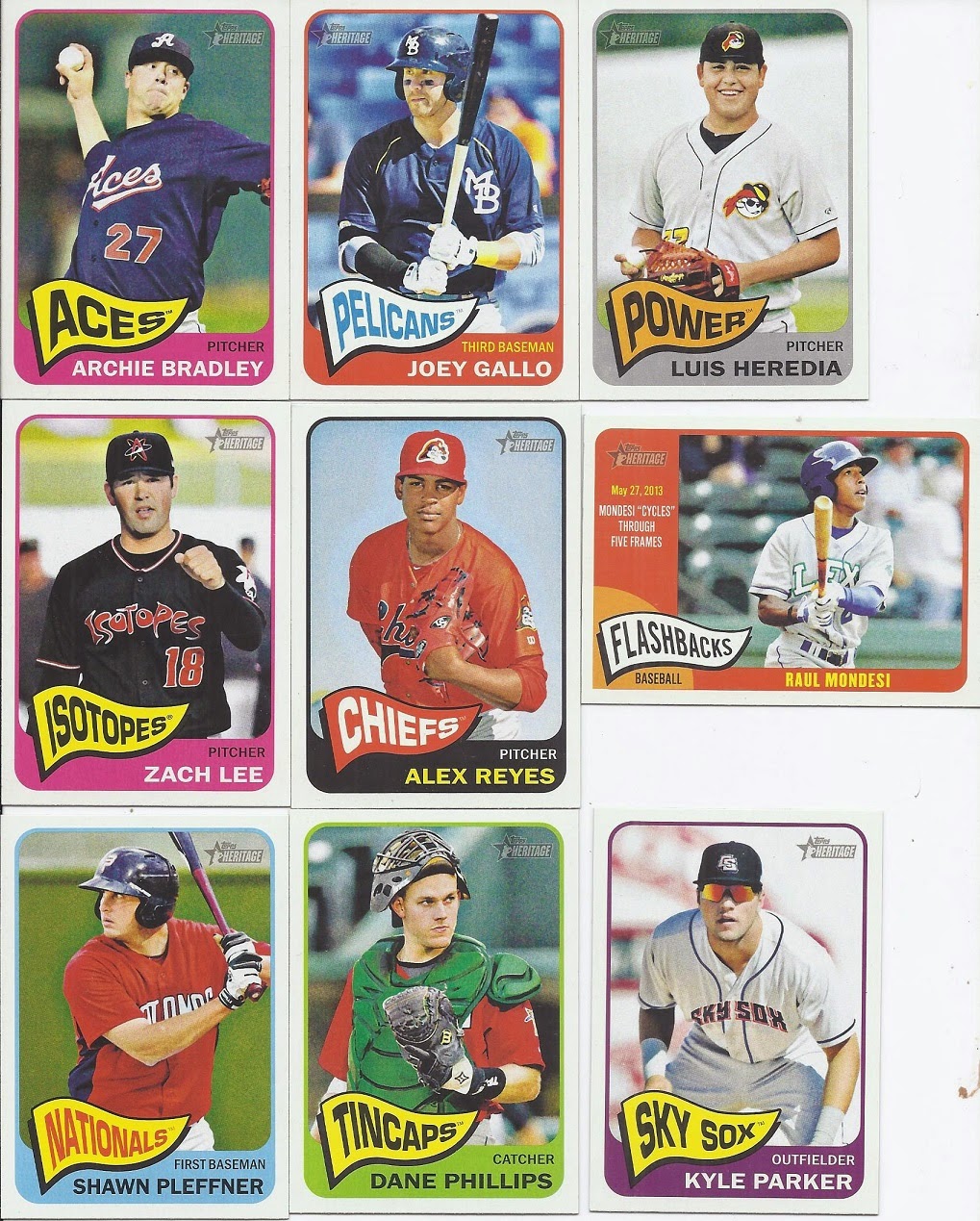 Pack 3 - I guess the lack of minor league photos from 1965 make it unlikely that there would be baseball flashbacks featuring the Denver Zephyrs, so they adapted recent minor league highlights instead. The middle card was always the insert or SP card in the pack, but I put the flashback to the side for easier scanning. They were the only horizontal cards I pulled. 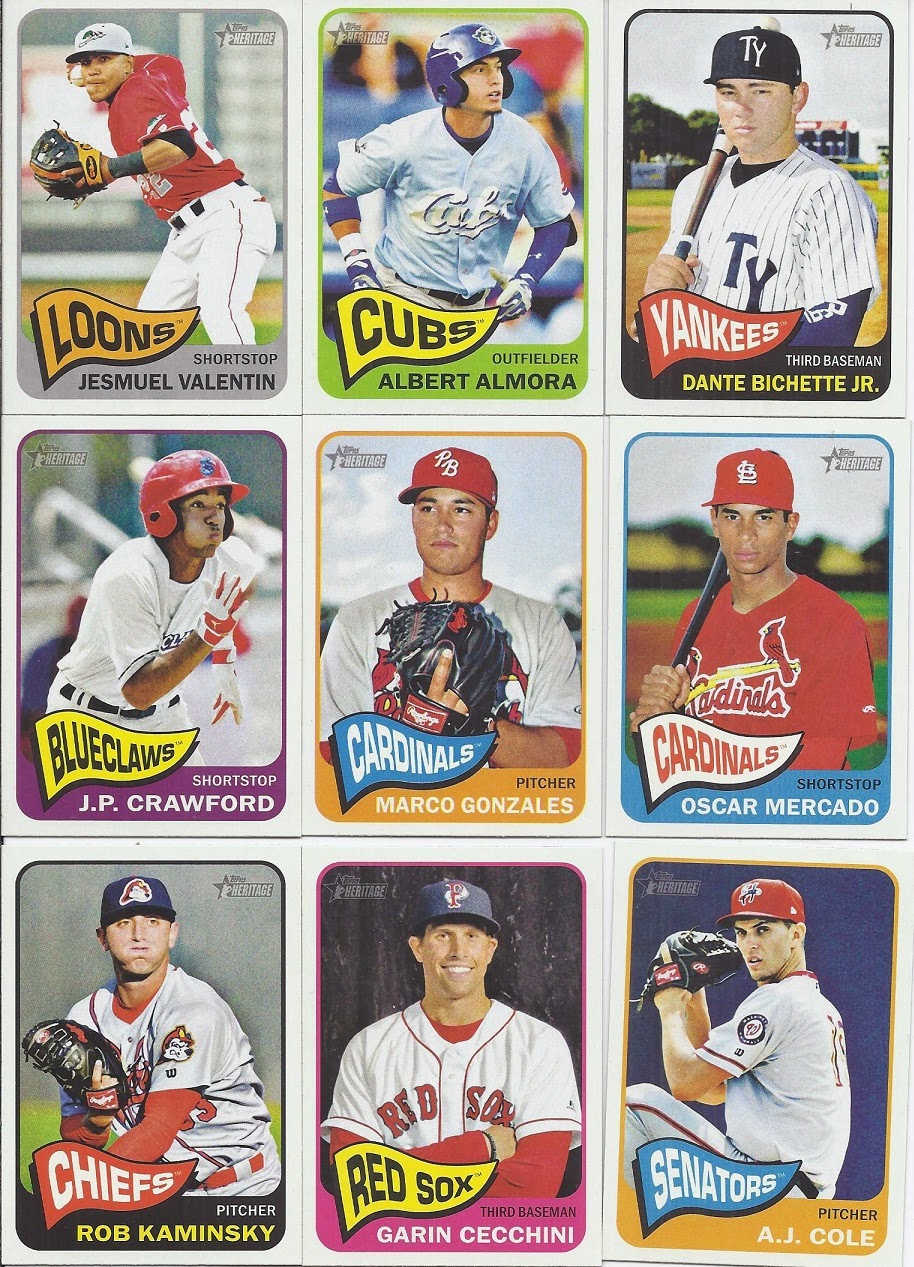 Pack 4 - My first SP of the break, with Marco being #205 in the set. I won't be building that, but will be hitting ship on my just commons soon to finish up the base. 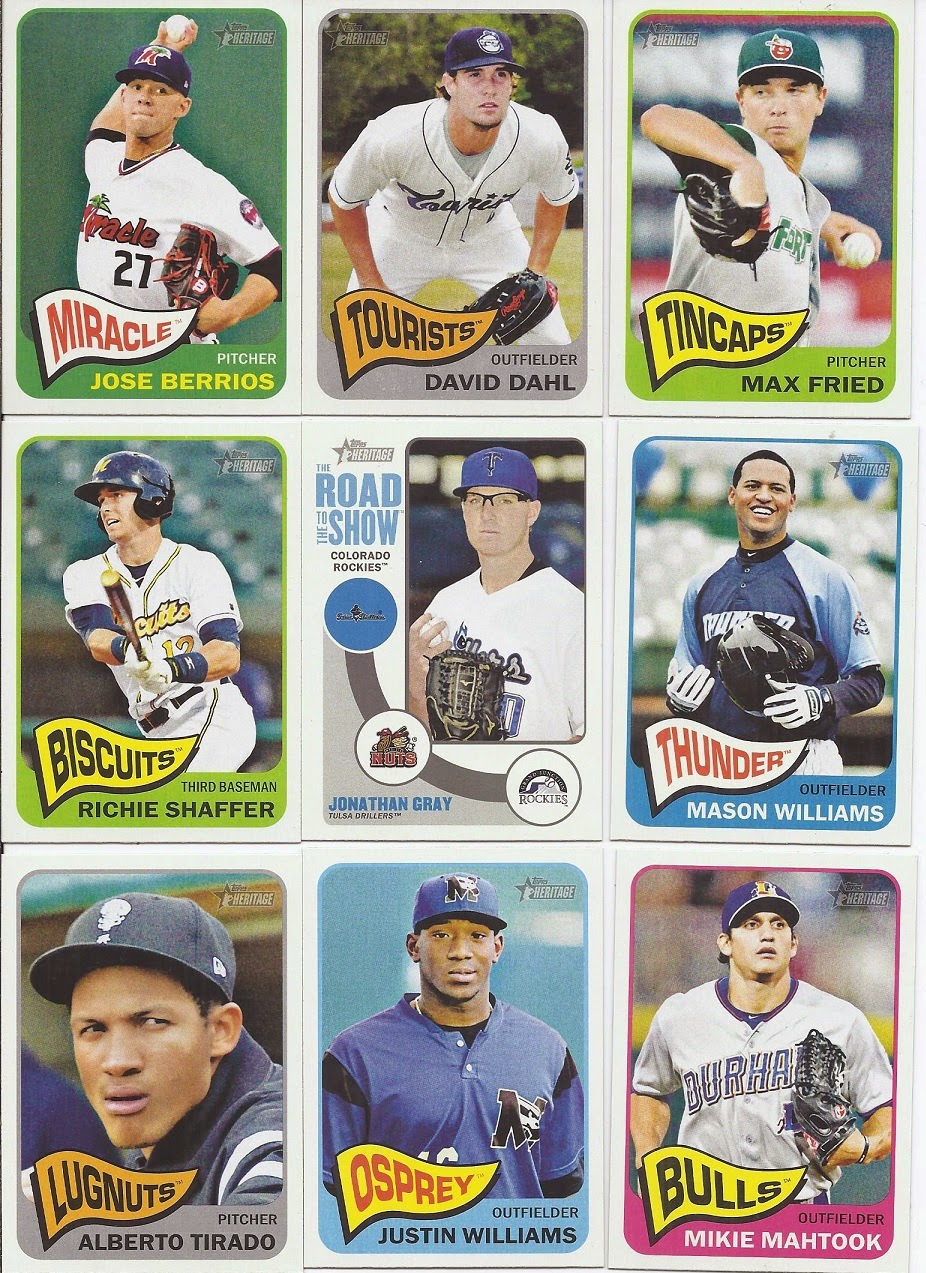 Pack 5 - Some nice appearance of some minor league logos here, especially with the Missoula Osprey and the Ft. Wayne Tincaps. My second Blue Jays card of the break shows up with the Tirado. 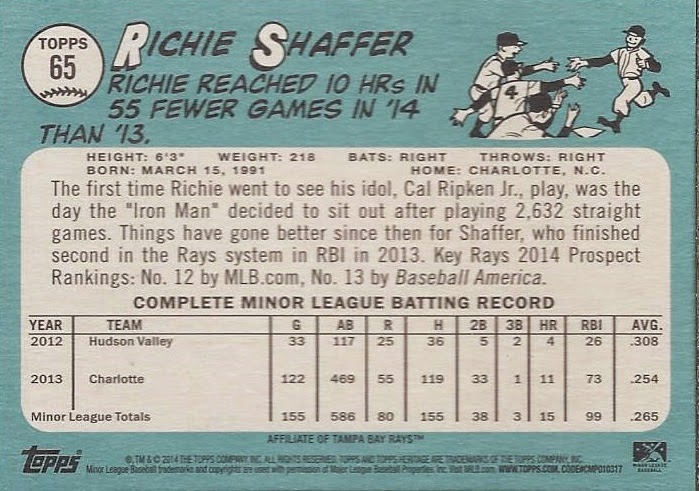 Since most of the backs have to do with their minor league performance only, I do like the little bit of Ripken trivia on the back of the Shaffer. 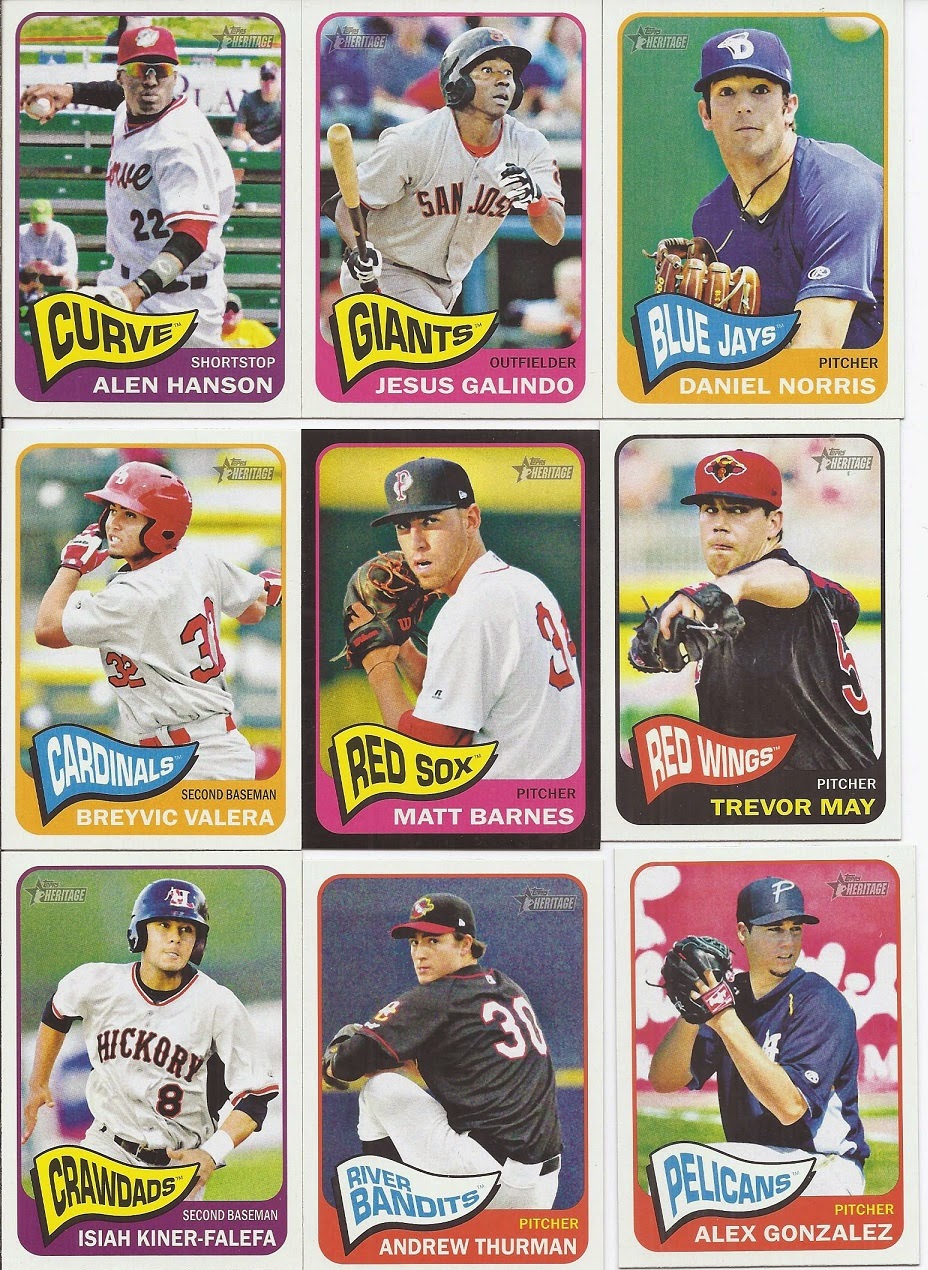 Pack 6 - And just in time for his starting pitching debut, Daniel Norris makes an appearance. I like the empty bleachers behind the Hanson. It just seems so minor league. And appropriate, considering the set name. The black bordered cards make their first appearance. They are limited to an odd number of 105.

And there's the first 6 packs in the box. More to come over the next whenever.
Posted by buckstorecards at 13:26