Yesterday, I showed off the single card I added to my Bills collection. I'll up that by one today, with a pair of cards on their way to my Canadian Content collection. 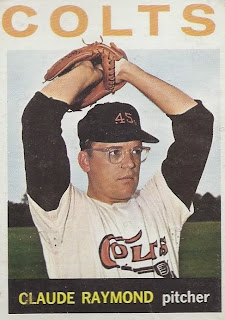 This is a "two birds with one stone " card. I wanted a card of Claude Raymond for my CanCon collection. I wanted a card with a nice view of the Houston Colt 45s uniform and cap. For 69 pennies, this one fit the bill perfectly for both wants. I think this is my oldest card in the collection, as well.  Claude would go on to play, announce and coach for the Expos. In their final game in Montreal, it was Raymond that gave the goodbyes for the team in French. 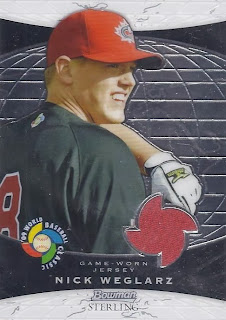 For just one penny more than I paid for the Raymond card, I welcomed this one to my collection as well. While I do have a nice collection of relics of Canadian players this is my first with any tie to a Canadian national team - in this case Canada's 2009 WBC Team. Nick has yet to taste the majors, having spent most of his time prior to this year in the Indians. It's also my first card of his, meaning two new members of the Cancon collection.

Edit: I forgot one! One that was actually on my Top 10 most wanted lists for way too long: 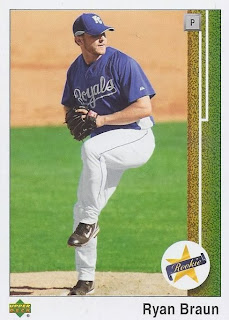 Ryan Braun! The only player to make the majors and get my hometown on the back of his card as his birthplace. Sure, he hasn't pitched since '11. I don't care! He's part of my PC, and worth the effort to find his cards, due to the presence of some other guy named Ryan Braun.

My New Year's collecting resolution is to, now that my Senators/Rangers/Raptors Frankensets are nearing completion, to focus more on NBA, NFL and MLB cards of Canadians. Sounds like a fine way to wrap up this post.
Posted by buckstorecards at 14:09