Part 2 of goodies from my secret Santa at work. And a pull that made me wish the Santa was not so secret, so I can recruit their magic fingers to pick up packs for me.

The packs were grouped with a 4th that had 3 aqua parallels. Of course, it is the day after sending off a Franklin relic to a UCLA alum collector that I come across a parallel that I could also have included. Oh well. Can't win 'em all. The aqua looks more like a faded silver in these scans, but it does look nice with the Steve Smith and his Panthers colours. 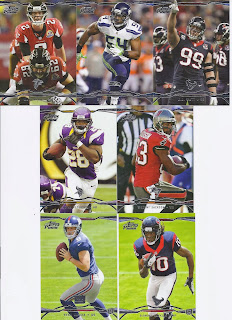 Pack 1. You have to love the full-bleed photographs. The Peterson wins the photography wars here, with a simple but intense picture. Look at those eyes! 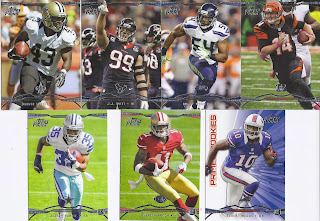 Pack 2. Dupes already! Arghh! But the Woods insert is a nice addition to my Bills binder. It's also the only pure Bills card that was in the packs. Photo of the pack goes to the Dalton. There aren't enough cards with the QB scrambling. 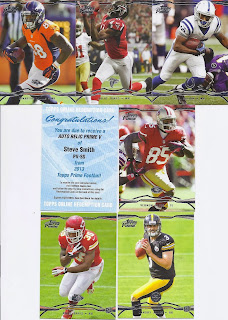 Pack 3! WOO-HOO! A hit! A redemption, but still a hit! It did force me to explain the redemption thing after opening. Looking at the odds on the back, these fall, retail wise, at a rate of 1:433. Given that they're mostly rookies, it's nice that mine was a veteran, of which they aren't a lot of in this set. There's Smith, Stevie Johnson, Cecil Shorts, Demaryius Thomas and ... that's all I can find at COMC or ebay. There's no indication of what this is numbered to, or much else, so I'll be surprised when/IF it arrives.

Oh yeah, another beautiful photo choice on the Jones.

Not too bad at all from my Santa.
Posted by buckstorecards at 13:53