Continuing to put up posts in advance of the ice storm whipping through on Saturday, fully expecting to lose power during the latter half of the weekend. 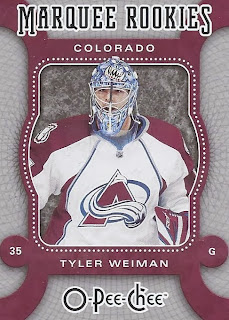 This one is entirely the blame of Shoebox Legends. Or at least one of his posts. He posted a bunch of Young Guns that he didn't want and sold (among others) to facilitate the purchase of a 1915 card. The Weiman YG was one of them, and upon seeing it, his creature mask made an immediate move onto my want list. There were two good shots of the mask, one on an OPC, the other on the SP game used. Since there was a decent enough price differential between the two, I opted for the far cheaper former. 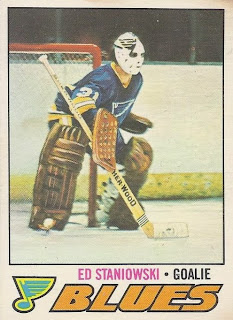 And for my second one  from the same sportlots seller that I got the Weiman, and yesterday's McMorrow from, this simple one. Ed Staniowski makes a nice simple mask that works so well with the team. Making more with less, and creating a memorable 70s mask. No complaints about this. 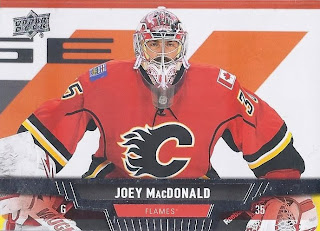 Although this wasn't part of the order, I felt this one appropriate to include. Card Boarded returned to blogging this week, and it was blog that coined the term "Goaltending Gallimaufry" for cards where the mask, pads, or any other equipment is coloured in such a manner that it doesn't match the current team, usually indicating a very recent trade. I had already showed some of the Ben Bishop Lightning uniform/Senators mask combo while building the Score set. Here's another one from this year's base set. Joey MacDonald is with the Flames, but the mask would indicate he's still with Detroit.

Assuming I've got power by late Monday, see you then!
Posted by buckstorecards at 03:01