Continuing and/or resuming two different features during the same post. Mainly because I really want to get through this box before my Black Friday goodies arrive from COMC. IT's probably just a short return of MM until 2014, as I really should start with my 50 favourite Senators cards sooner rather than later. 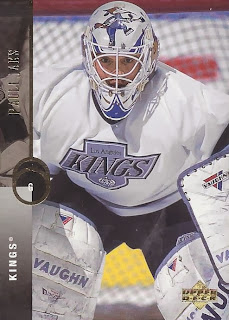 Me thinks someone just got called up from the Phoenix Roadrunners. Its interesting that the mask goes more for cartoon-ish than intimidating. Here's an attempt at something a little more intimidating, but is still melds nicely with the red, blue and white of the Habs. 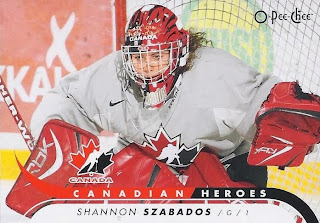 And here's the third and final card I picked up for the binder, and another rare appearance of the ladies in the mask binder. She joins Manon Rheaume and Kim St. Pierre in representing the distaff side of things.

I think I can still squeeze 3 more posts out of the Expo. Until then!
Posted by buckstorecards at 05:53