How NOT to pack search

So, on Friday I needed to make a trip over to Wally World. After gathering what I needed, I made my way to the card aisle. I was leaning towards picking up a blaster of Upper Deck Team Canada when I took a look at the hanger packs.

One of the packs was of 2013 Panini Rookies & Stars, and it was obvious something had been done to the pack. The bottom portion of the rack pack had something done to it. It wasn't just felt to look for something. It was half open. I groaned, and just put in my cart to give to the cashier with my best try at a "It wasn't me. Really." face.

However, my nosiness got the better of me and I looked in. Hmm. A thick card. Probably a blocker. I guessed that was why it was returned to the hangers.

Wait a minute. That's pretty colourful for a blocker. Hey! It's an actual hit! In an obviously searched retail product!  So not only did someone open the pack, but they left it when they saw the hit. Guilt? Whatever, I elected to buy it. At least someone won't have to send it to returns. And maybe someone will want the card as trade bait.

I could see green and yellow on the card, so it was obviously a Packers hit. So, that meant either Eddie Lacy or Johnathan Franklin would be the very likely hit. Which one? 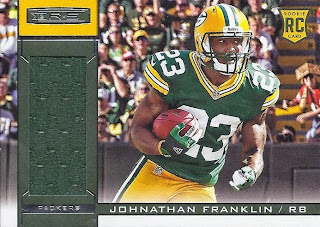 The latter. The former would have been nicer, but a hit is still a hit. Despite the fact they're event worn as opposed to game worn, I really like the fact that the swatches are cut from the home jerseys. 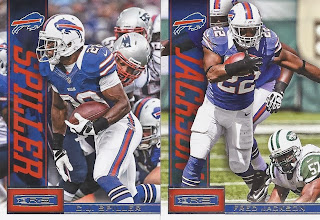 But hey, there's more to this pack than just the hit. There were 39 others in there as well. There were only 3 Bills among the non-rookie base, and I pulled two of the them. Only Stevie Johnson was missing from this group. 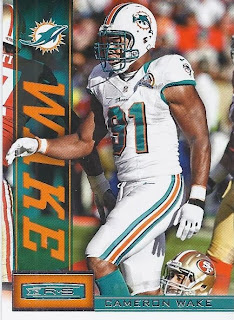 Hey! A CFL alum! A shame he's with Miami, but what can you do? 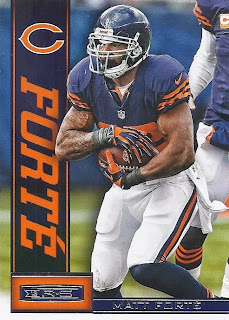 My favourite of the base that wasn't Buffalo-based was this Matt Forté. A throwback uniform is nice, but seeing that they actually got the accent right on the name. Kudos to Panini for that. 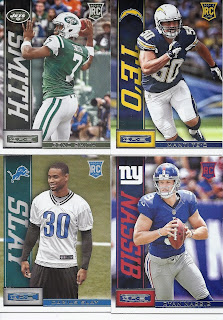 And here are the somewhat SP'd rookies. He hasn't had the best of rookie seasons, but the Smith was a nice pull, although I'd rather have EJ.

This was not too bad for the price of a rack pack. If the rookies weren't SP'd at a rate of about 10 percent of the pack cards, it would be a fun small set to build.

So, an obviously searched retail pack brought me a hit. This must mean I'm going to have some sort of negative card karma over the next week or so.