The goodies waited until the first mail day after Christmas/Boxing Day, but they still came. As always, the cardboard goodies are worth the wait. Time to start posting them! 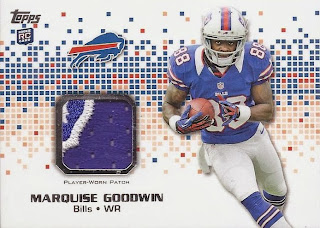 This year's rookie crop had a really nice number of Bills among the checklist. The ones that made the most appearances in terms of hits were Robert Woods, EJ Manuel, and Marquise Goodwin. I have managed to pick up hits of the first two on the list. I've also managed to pick up Bills hits of former Bills, having a Da'Rick Rogers lurking around somewhere. But, a Goodwin hit eluded me, and I was determined to remedy that on Black Friday.

The low range of his hits were in the $2 to $3 range. But I opted for this one that came in at $3.25, because of the interesting portion of the patch. As you can see, it offers a hint of the buffalo head from the back of the jersey. I was a smidge worried about it being a situation where somebody took out the regular swatch and replaced it with a more interesting one, I figured that nobody would try to do that on a three dollar card, so I picked it up.

Just one card for now. More to come!
Posted by buckstorecards at 06:22