All good trades must come to an end, even if it is a trade that sees cash arrive in your Paypal acc't and that turned into more cards. 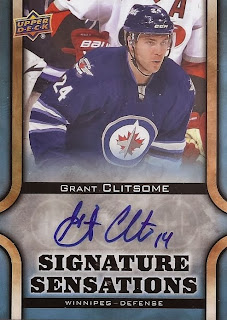 Yes, it is another card of Grant Clitsome. The guy whose name would be perfect for genie fetish adult films (and google tells me such a thing might exist, but I refused to click off the search page) if it weren't for this pesky hockey thing. Sadly, this is another sticker dump, as he is wearing #24 in the picture, as opposed to the #14 on his auto. He wore both #44 and #14 with Columbus. Every picture I can find of him as a Jet has him in #24, so this sticker has been sitting around UD for a bit.

Oh well, it is a great addition to cards my inner Beavis can snigger at. 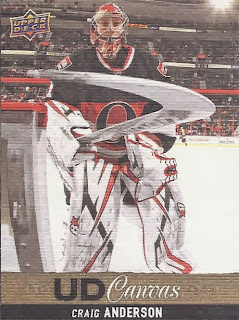 I'm being good for avoiding UD Series 1. I've wussed out and bought a hobby pack, and a rack pack, but I am leaving the rest to singles. So far, a month after the release, I don't have too many cards from this release. The first single I purchased was the auto of the esteemed Mr. Clitsome. This is the second. I keep pushing back my eventual top 50 Ottawa Senators cards due to laziness, but I can always say now I held out so I can add this Craig Anderson canvas card into the set. It's a very likely contender to make the list. 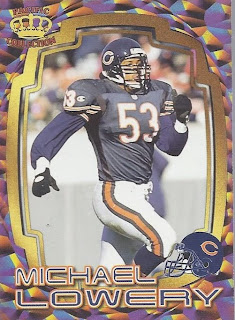 And here's the latest member of the 2/14 club. It's from a Pacific subset called "Best Kept Secrets". It was pretty secretive to me, as neither COMC or zistle showed any sign of it even existing. However, someone on Sportlots had it, and as best I can tell, it is his only card from his career. His birthdate isn't even listed on the back of the card, so I have to hope all the online sources are accurate and he is a 2/14 baby, born one year before I was.

Posted by buckstorecards at 15:58