I generally don't bring cards to work. For one thing, I'm only a temp and part-time, so the full-time users of the desk I borrow might be upset to see a well-loved card push-pinned to their cube wall. But, the proximity of a post office does mean that bubble mailers accompany me to that office frequently. So, I am known as a card guy.

And my Secret Santa office gift was two hangers of football cards. One was a hanger pack of Topps Prime football. The other was a hanger repack of football with a guaranteed relic. Someone at the office did learn about relic cards, since she saw the package, and wondered how they could fit a whole jersey into the box. How I wish I was kidding.

I've never had the urge to touch the oven that was either of these products,, so it was nice to bust it for the first time. I'll go through these in the order I opened them, starting with the repack today, and get to the Prime tomorrow. Interestingly, the best thing came out of the last pack of Prime I opened. But, that's tomorrow. 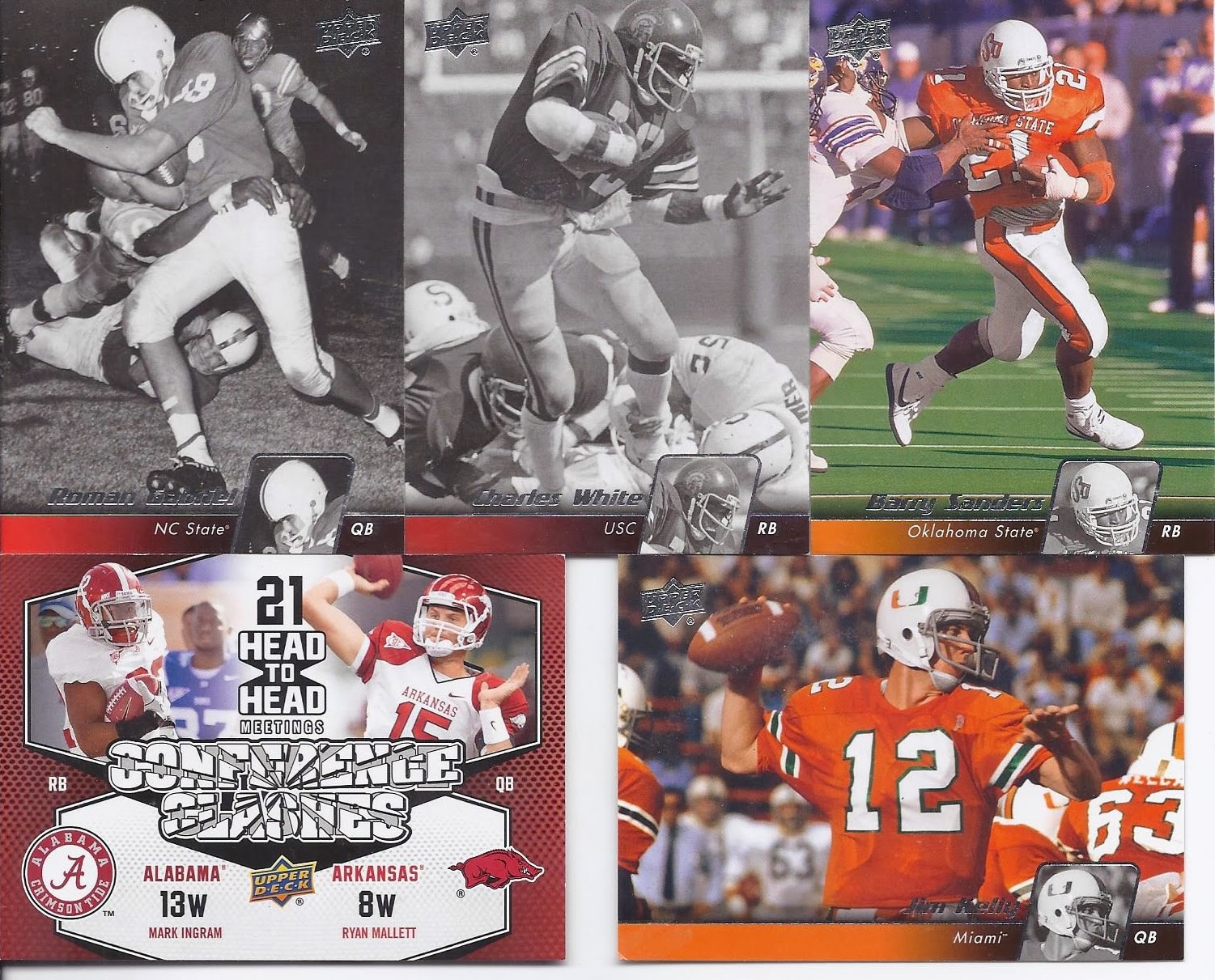 First up, 2011 Upper Deck. That's a pretty impressive group of QBs and RBs from this pack. Jim Kelly is the easy best card in this pack for me, and it's my first non-Buffalo card of his for my 2.14 binder.

Next up was a pack of Press Pass: PE. 2 packs, 2 NCAA cards of Bills. But yeah, this was incredibly bland. At least I can use the blocker card when sending out trade cards. 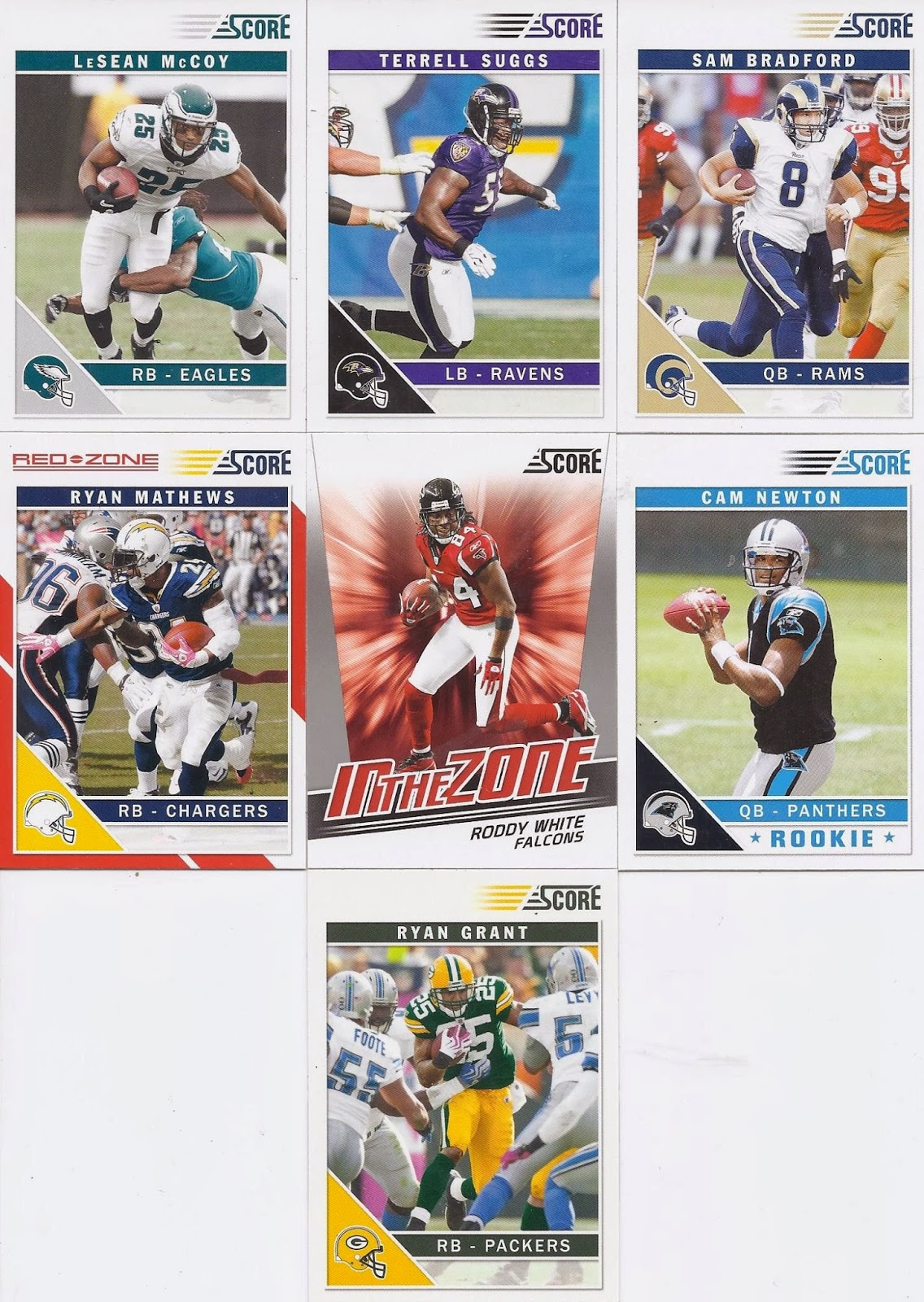 Finally, 2011 Score wraps it up. The pack promises one rookie card, and it delivered with one of the better ones from the set in the Newton. I probably should have kept the package to see what rate the Red Zone cards fall at. The Ryan Grant is a glossy parallel. 7 cards with 2 parallels and an inserts would equal a major annoyance for a set builder, though. 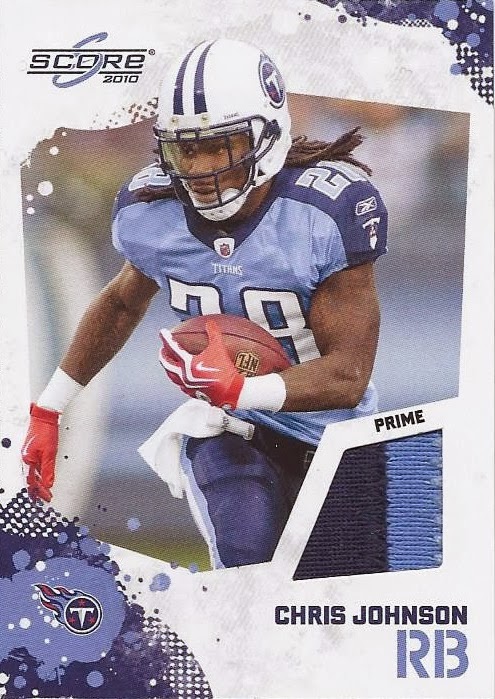 And the hit! It's a card that was actually an insert in the retail sets, so it surprisingly isn't numbered. It's a nice thick two colour swatch, with even some loose threads at the one side. It's supposedly cut from a rookie premiere event jersey, meaning this one sat around Panini HQ for a couple seasons before finally being added to a card.

It's still better than the all white swatch from some rookie I've never heard of, which was what I was expecting.
Posted by buckstorecards at 16:17

Email ThisBlogThis!Share to TwitterShare to FacebookShare to Pinterest
Labels: football