Since I really don't have much of a theme, and there's only a handful of cards left in the box, here's said handful, and I can finally get caught up on my trade posts. 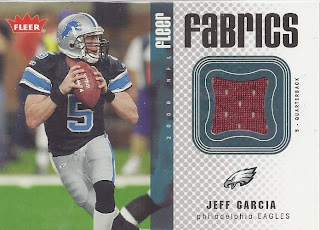 Let's start with a football version of a card I picked up at the Spring Expo. There, I picked up a Jani Hurme card with a Senators helmet and swatch, a Panthers jersey, and him being listed with the Thrashers. This is another three team card. The CFL alum is pictured with Detroit, listed as an eagle, and the swatch is likely a 49ers one (it definitely isn't Motown or Philly). Heck, maybe it is a Stampeders swatch. 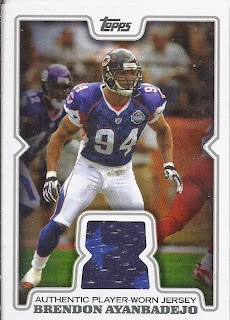 I liked how the back of the card states that the swatch isn't from any particular game, when it is fairly obvious to anybody where it is from. If I was so desired, I could probably find the specific stars that are visible on the swatch on the jersey. 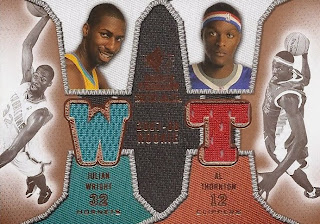 And this is what you get when you reach and 'X' cards for 'Y' dollars, and you have X-1 in your hands. You grab something - in this case, rookie photo shoot relics of two guys no longer in the NBA. 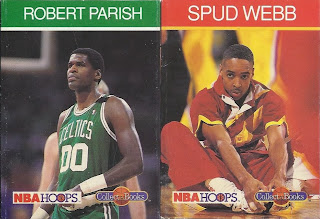 Hey! Some Collect-A-Books! I hadn't seen any of those is ages at shows! Spud and the Chief. Quite the contrast in subject manner as well. 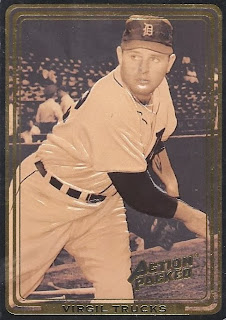 And to wrap up the individual cards, this Action Packed of Virgil Trucks. But, still one more set to go. 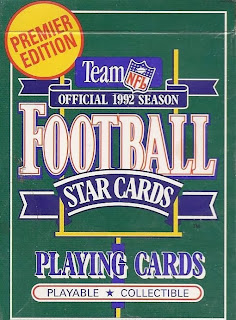 50 cents for a group of NFL playing cards. Less than a penny per card. I can't even pick up a set of cards at the surplus store for 50 cents.

Since it was a 1992 set, the Bills were given decent representation in this. There were also lots of guys who I was surprised to see. I mean, you've only got 54 cards to work with. Couldn't you pick somebody other than Dan McGwire to be the lone Seahawks representative? 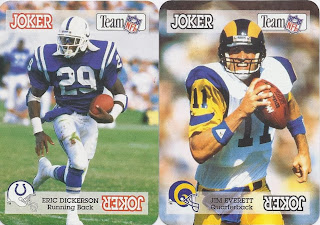 Yup. 54 cards. Not sure why these two are the jokers in this set.

Whew. 29 posts worth of cards from the same show. At least now I can finally get caught up with several envelopes worth of trade posts.
Posted by buckstorecards at 16:54