Top 10 Cards from a Hockey Repack

Despite being up to my arse in Expo posts since early November, I haven't neglected my love for the repack. Several baseball and basketball ones made their way to my humble abode. Only one hockey one did. It was one of those 4 packs, 50 cards and a bonus item repacks. 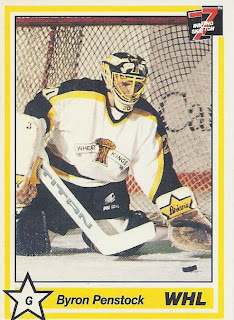 10. 1990-91 WHL Byron Penstock. Cards on their way to the mask binder will be all over this list. Half of my top 10, in fact. Here's the first, a somewhat oddly-angled mask with a rather flat head. Maybe he was a huge fan of the Zork series. 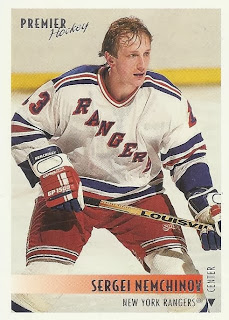 9. 1994-95 Premier Sergei Nemchinov. Outside of the usual suspects, such as Ken Linseman, you really didn't see a lot of helmetless game shots any more by the 90s. Interesting card rarity. 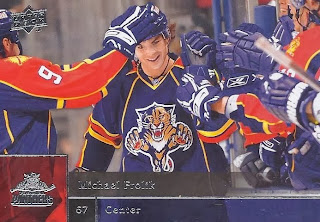 8. 2009 UD Michael Frolik. I loved all the goal celebration photos in this year's Score. I love them here. There were several in the pack with the Talbot and the Plekanec, but this one with Michael Frolik making his way down the celebratory line. 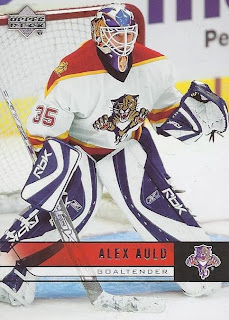 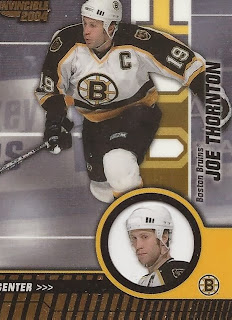 6. 2003-04 Pacific Invincible Joe Thornton. This was the 1 bonus item in the repack. It has a nice layout with the head portion near the bottom being clear. It isn't badly-centered - I just hosed up with the scan. 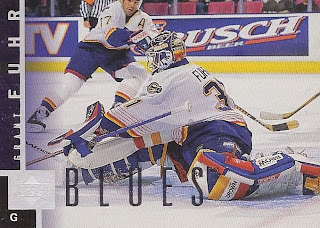 5. 1997-98 Upper Deck Grant Fuhr. A nice view of the mask. A great UD action shot. Why isn't this higher? 2 reasons. There were other, better cards for the mask binder among the Top 10. The second reason is that there were two of this card in the 50 card repack portion of the box. Dupes in a repack always suck. 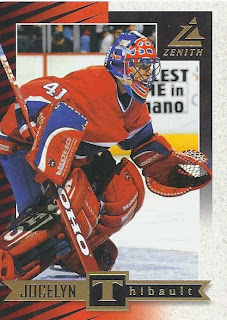 4. 1997-98 Zenith Jocelyn Thibault. Another great mask shot. The clarity of it places this one above the HOFer. 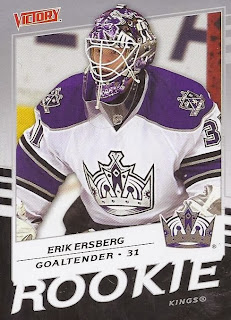 3. 2008-09 Upper Deck Victory Erik Ersberg. While it isn't the best mask photo in the box, this one gets bumped up into 3rd place for the for the obscurity factor. It's only my second binder card of his. Erik spent his time bouncing between the Kings and the minors for several seasons. He's now in Germany playing for the Iserlohn Roosters. They do have a great logo, so there's that as well.

The decision over the top 2 was pretty tough. In the end, I used the photo choices as my deciding factor. 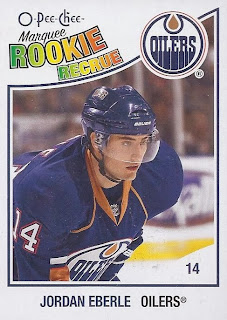 2. 2010-11 O-Pee-Chee Jordan Eberle. Yup. That's a pretty good rookie card to pull from the OPC pack. Interestingly, I also pulled the Subban rookie from the same set from a pack in a repack. So, if I want the Skinner or the Hall, my best option would be to pick up a repack as opposed to a blaster or box. 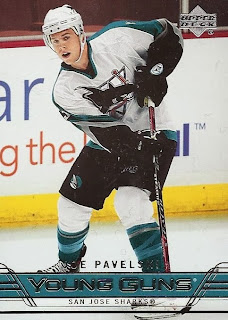 1. 2006-07 Upper Deck Joe Pavelski. And a Young Gun card wraps it up. While it isn't the big one in Series 2 (Malkin), it's still a pretty good one, considering it is loaded with a lot of "This guy was in the NHL?" types like Mike Card and Barry Brust. It gets the nod over the Eberle for the full bleed on the the top and sides. 10-11 OPC really overdid the border on the base and high number cards, and that was the deciding factor here.

Not a bad repack box at all, with two nice pieces of trade bait coming from it.


Posted by buckstorecards at 09:31