Still, the nearest Wallyworld didn't have Series 2 retail in, so I'm still waiting on diving into that. I just wish that shiny looking Target in town would finally open. Until then, I still lack the willpower to exit the card aisle without at least something, so I picked up a repack for a few bucks that had 3 packs in it. I elected on one with '06 UD and '07 Turkey Red visible. Lurking in behind was a 2007 Topps S2 pack. 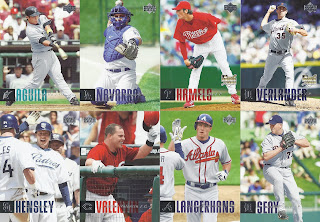 I grabbed this particular repack due to the 06 UD in it, hoping for some nice photos. There are a couple great photos in this one. I love the Hensley most of all. A pitcher offering a high five to a filthy Brian Giles. Based on the gloves and helmet, he looks like he's in the on-deck circle. About a minute away from being a pitcher at the plate card. The hat-tip card for Valentin is also nice, but the stars of this one are in the upper right. A very impressive duo of rookies. And until something surpasses it, Verlander did give me my coolest in-person baseball moments, so I  find it hard to pass on any of his cardboard. 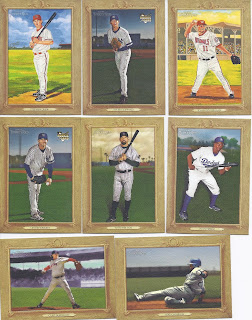 The Helton is a SP, but the best card for me here is the Tyler Clippard. Sure, it's a Yankee. Sure, the back mentions a successful debut against the Mets. But he's a member of the 2/14 binder, and that forgives all. The bunting Juan Pierre card is also a nice addition. 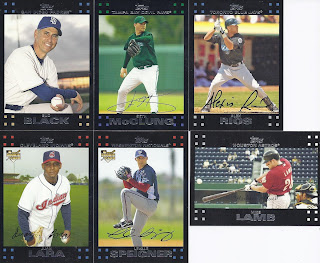 And the Series 2 Topps. The nod here goes to the Mark Lamb card for a great horizontal picture. The empty seats enhance the card, making the ball even more visible as it jumps off the bat. And Rios is the only Blue Jay or Met in the whole repack. I do like the signature of Alexis though, since I've got a couple Rios cards with that as the name as opposed to the abbreviation.
Posted by buckstorecards at 09:18