COMC additions to the 2/14 binder

A mailday from COMC over a month in the making added a nice selection of cards into my 2/14 binder. It gained 7 brand new members, an insert, and 5 hits, all for a little more the cost of a blaster. This might be the most diverse addition I've ever made. 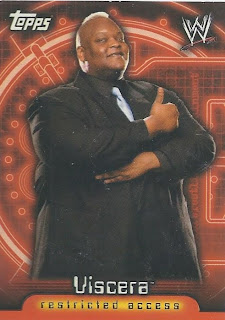 Opening up, here's what is certainly the biggest addition to the binder.  He'll likely stay that way, unless A&G puts out a card of a building that was officially opened on Valentine's Day. At 400+ pounds, it isn't really a contest. Whether you call him Viscera, Mabel, or "The World's Largest Love Machine", Nelson Frazier is a 2/14 baby. 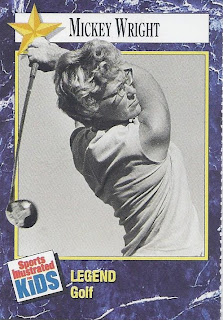 This is one that I found while going though  a list of "people born on this date". I'd never heard of Mickey, and it is a shame, as she's quite the legend in women's golf. 13 titles in a single year and 82 overall. She is a member of the World Golf Hall of Fame, and therefore joins Jim Kelly as the second enshrined 2/14 baby that I'm certain of. 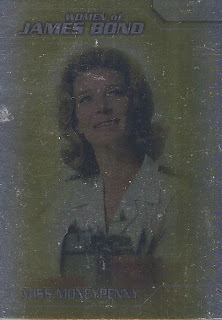 This looks dreary due to the scan, but it is far brighter. Lois Maxwell's name came up on the MST3K info club's annual list of 2/14 birthdays due to her appearance as Miss Maxwell in the laughable Operation: Double 007, but she's far better known as Miss Moneypenny in the Bond films. 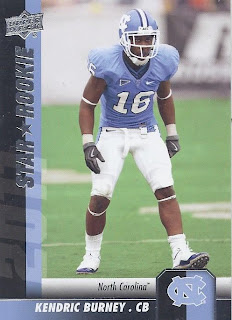 He never played an NFL game, but his name showed up at pro-football-reference, so he counts. He was last seen having signed with the Montreal Alouettes, but isn't on their current roster. 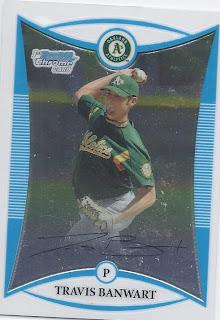 He's still playing, but seems locked in at the AAA level in the Oakland system. 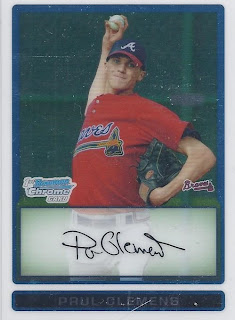 Now we've got someone who might show up in the Update set. Maybe. He's appeared in 29 games so far this year, but he's done so with the Houston Astros. If you watched Dimwit's GQ Group Break, you know how much love Topps has for the Astros. So, I'm not holding my breath. 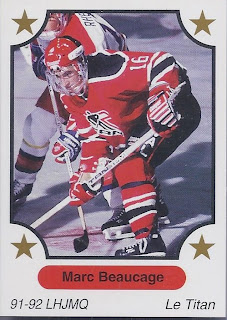 And the final newcomer to the binder. Although Beaucage never made the NHL, he did have a decent career playing in Europe and Quebec. 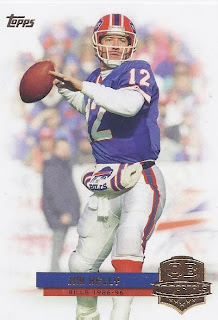 For a Bills fan, his cards in the binder aren't nearly as numerous as they should be. I really need to do a run on his cards from a single dealer at sportlots some day. In the meantime, this will do nicely. 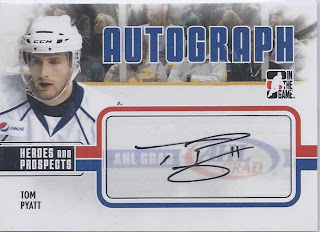 With all due respect to Mr. Pyatt, there aren't going to be a lot of hits of his out there. As always, the obscurity factor of some of ITG's releases can help with that. 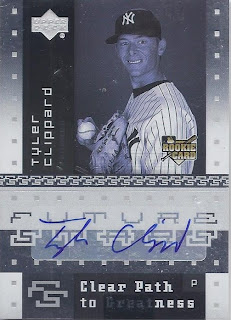 Why are there no auto'ed cards of Clippard where he is wearing anything but Yankees colours? On the upside, at least I can kind of parse his signature into something legible. 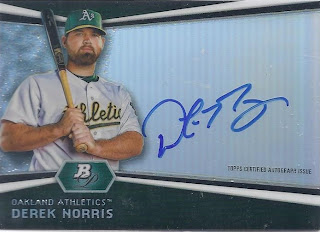 Unlike for Derek Norris. His signature kinda falls off the rails after the 'D'. 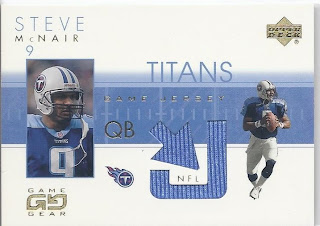 Relics? I picked up two of those as well. Both football. I would have loved to add an autographed card of Steve McNair to my collection, but his untimely death placed those out of my price range. Still, this one does add a new colour to the relics in my 2/14 binder, and my first hit of McNair.

And finally, the splurge of the purchase: 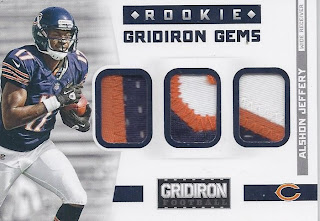 $7.75 for this one. It's a Rookie Premiere card, not from a game, but I couldn't turn this one down. Low-numbered (27/49), and some variety to the colours with the patches. This beauty is for now on the first page in the binder, and right in the middle position.

Posted by buckstorecards at 13:37