I originally planned to combine this with the rest of the cards from the baseball repack so things were even over the 3 days. Instead, I had so much fun busting this surprise box that I just decided to post the contents of the Box today.

Opening up with an eight card mix. 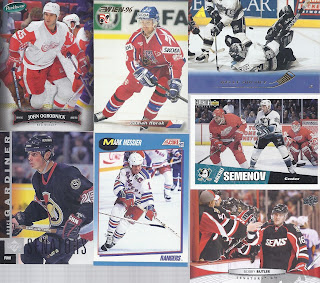 The most random of the packs you find in these brings some awesome stuff. I've loved recent Parkhurst stuff for providing new look cards for players you really don't see much of as part of sets that include the usual suspects. Kind of like Archives Fan Favorites. Ogrodnick fits the bill there. I love all the Swedish cards I've been finding in these as of late. A pair of Sens would usually be a highlight for me, but not here.

It's actually the Hrudey. A great photo for the mask binder, but the back might be even greater. 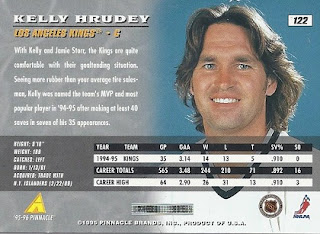 There's a mullet you can set your watch by. 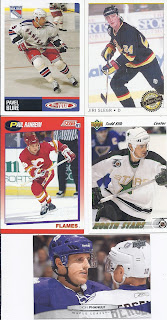 The HOFer is a checklist card? At least it isn't a 1991 Pro set of Larry Murphy. 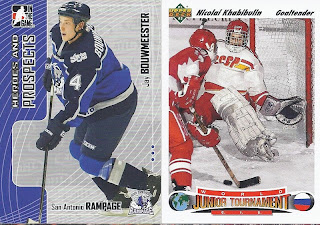 I fully expected the rookie to be from the early 90s the first time. It ended up being one from this year's OPC. This time it was early 90s, but of a decent enough player. Honourable mention going to the Jay Bouwmeester with the San Antonio Rampage jersey. Clarkson can be added to my Rangers alum collection, and Cammalleri can go in the next TMM pile.

And a bag of 100 sleeves. Perfect for upcoming maildays!

Posted by buckstorecards at 14:08