Another day, another repack

Should I post cards from the repack I purchased 2 1/2 weeks back, or the one I purchased a month back? I'll have to get to both at some point. The most recent one was more interesting, so I'll get do that. I purchased this one because of one visible card, which was on the side I'll post tomorrow. In fact, the other side was far more interesting than this one. But, there were still a small # of binder cards here.

These were the two visible cards. A nice horizontal pic and a Diamond King. I could have done worse. 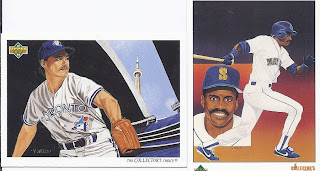 Two more drawn cards. It takes me back to the days when the Skydome's roof was something really neat, instead of now when it's just your standards 70s multi-purpose stadium with a roof.

An O-Pee-Chee card! No trace of it on the front, though. No L next to the P. Nothing. I didn't even realize it was an OPC until I flipped it over. But there were the stats in all their bilingual goodness.

Your standard dupes in the same package. 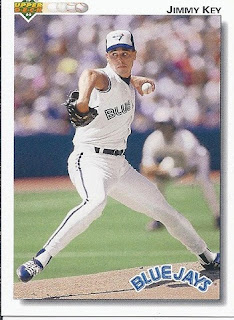 And the only non-checklist Blue Jay on this side of the package. 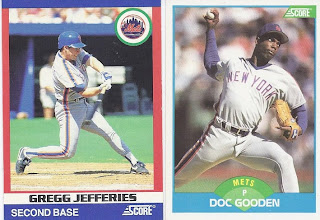 And the 2 Mets that were in this portion of the pack. I'd never seen any cards from the Score 100 Superstars set before until this Jefferies card. And it is hard to hate any Mets card of Gooden. 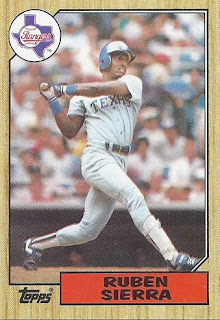 Sure. It's a junk wax era card. But it is the first Topps card of pretty good player. It might actually be my favourite card in this portion of the repack.