It may have been a holiday stateside, but it was just a normal mail day up here. And the mailman brought me a small envelope from a Sportlots. I'd used the birthday lists on baseball-reference to find candidates for the binder, but that only covers people that reached the majors. Finding minor leaguers was a little harder, but searching for "February 14th" with google turned up some new candidates.

The problem is that most minor league cards go for about $2 - $3 at COMC. I guess the seller wants to capitalize on people that want "their card" or the card of the guy they know from work. However, the sportlots seller had them for $1.00 each, si I jumped on 4 new cards.

I don't care that they didn't reach the bigs. Their cards are still honoured members of the club. 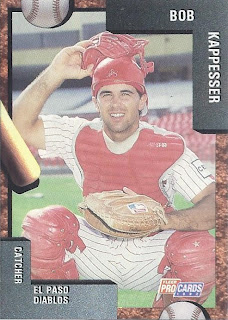 Bob did make is as high as AAA in the Brewers system. Bob now is co-owner of a turbocharger company, and if you look carefully in the photo at this company's site, I think this card is shown in the lower corner below the framed jersey. 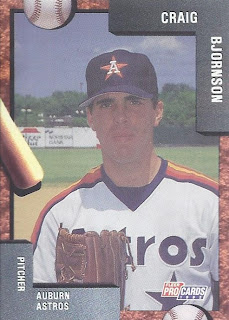 Craig is the only one of the 4 to warrant his own wikipedia entry. Although he never made it above A ball, he's still in the Astros system - nowadays as the roving pitching instructor. 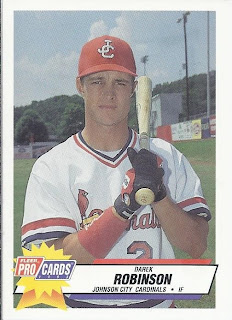 Another player who never made it past A Ball. There's apparently a Darek Robinson who writes war novels over in England, but I rather doubt it is the same person. 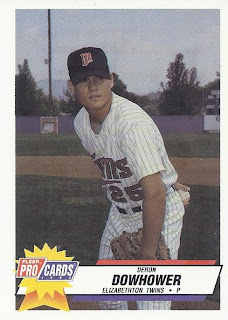 Deron Dowhower was another A ball player. After leaving baseball, he did get a mention in the University of Virginia's alumni newsletter as he moved into an IT career, and got written up, right ahead of the woman that married Peyton Manning. He's now director of a consulting company in Atlanta.