My LCS' hours didn't really jive with picking up a jumbo box before the weekend, but Target's hours start early enough to at least allow for a rack pack purchase. So, I did just that and picked one up. The previews looked promising in terms of photography, so I figured I'll be going for the base set. 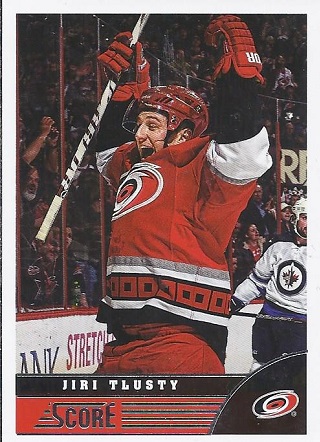 #87 Jiri Tlusty -I always consider the first card I pull from any set an indication of how much I'll enjoy the set. Opening up with a celebration card is a good thing.
#73 Tim Jackman 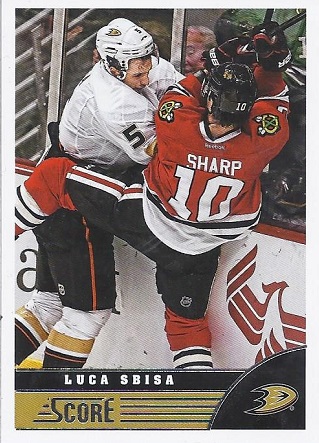 #11 Luca Sbisa  - A nice jostle along the boards card is always welcome instead of a generic skating, passing or shooting shot.
#60 Akim Aliu
#69 Cory Sarich 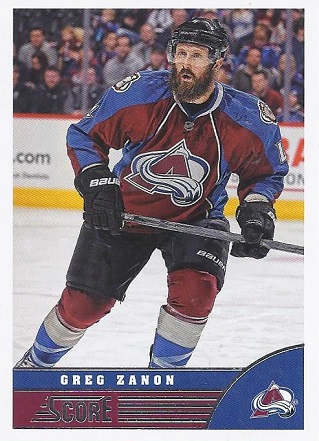 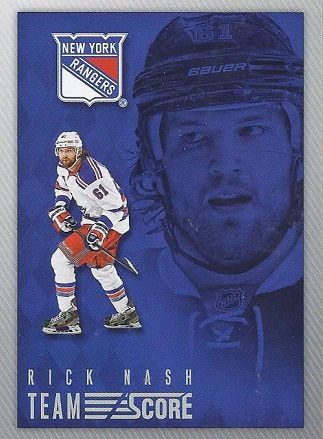 Team Score - TS3 Rick Nash - These are really nice. The design reminds me of the 1992-93 Dream Team cards, just with a more modern look to them. I'm assuming the background colours match the team's. 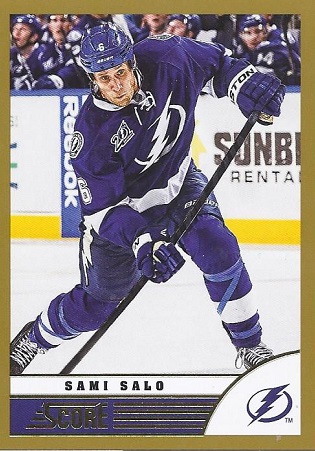 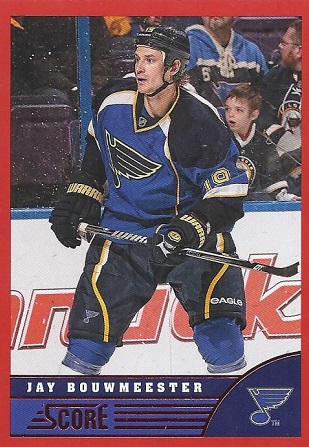 Red Parallel - #455 Jay Bouwmeester - My first two parallels. The way it works with the team colours and logo, but the red looks nicer than the gold. I do like the full colour border this year as opposed to the single stripe from last season on the gold.
#554 Flames Team Leaders
#377 Nicklas Grossman 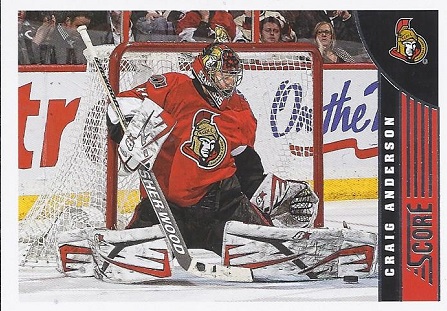 #348 Craig Anderson - WOO-HOO! My first Sen! My first chance to post a horizontal card. I really don't like that the name and the 'Score' is still horizontal, but the fact that they use the team logo, and have it rotated properly, place the hockey usage of horizontal shots in the flagship ahead of the football release. 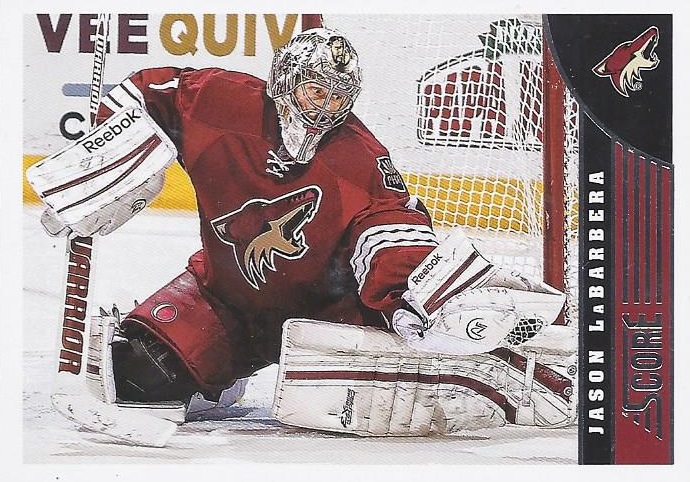 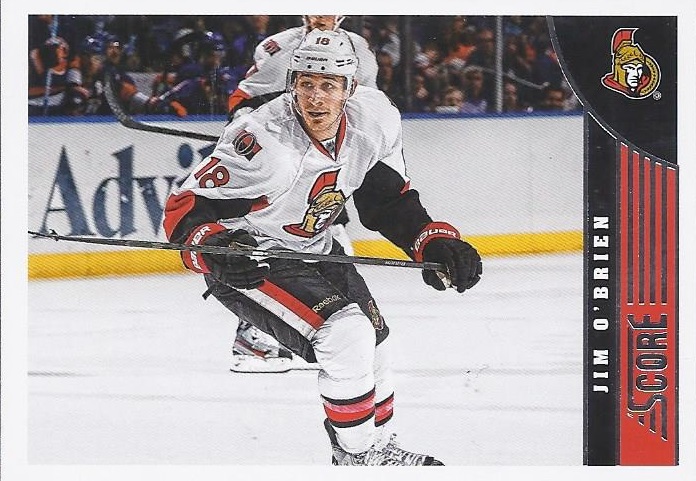 #362 Jim O'Brien And another Senator! 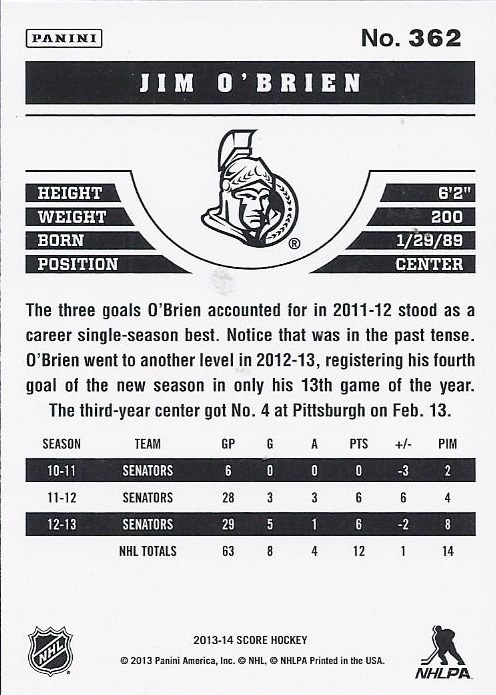 This is as good a place as any to post a scan of the back of one of the cards. Very bland, the two colours look like something you'd see decades ago. It's my only thumbs down from this pack break. There are apparently alternate backs, but it didn't appear that I pulled any of them.
#445 David Perron
#490 Jake Gardiner
#513 Derek Roy
#527 Jay Beagle 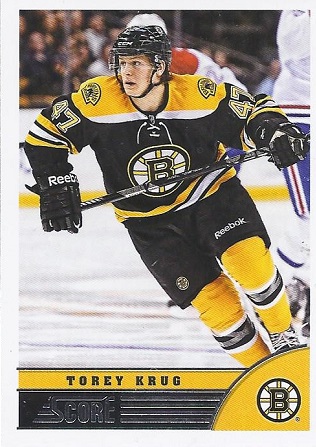 #38 Torey Krug. This was probably the best base card I pulled. At least in terms of costing beyond the cost of a common when set building. Hopefully, he doesn't end up being the 2013 Stanley Cup version of John Druce.
#105 Andrew Shaw
#207 Tomas Kopecky 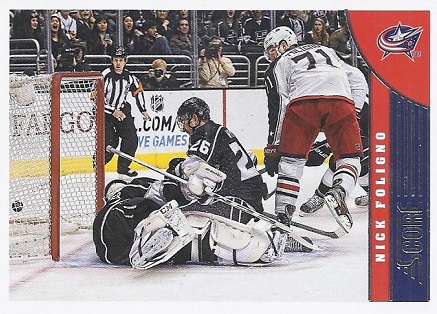 #137 Nick Foligno - This is definitely the strangest of the base cards. Back to the camera shots are rarely a good choice for a card, but seeing the puck in behind Bernier makes up for it. Nick did pop a goal on 2/15 in Los Angeles, so it is a scoring play for the card's subject.
#195 Ryan Jones
#134 Brandon Dubinsky
#277 Patric Hornqvist
#286 Paul Gaustad
#300 David Clarkson
#239 Niklas Backstrom
#255 Tomas Plekanec 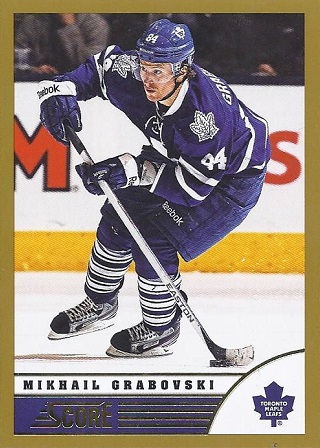 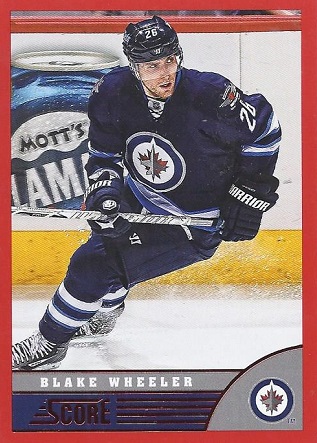 Red Parallel - #539 Blake Wheeler. Again, the red beats the gold in the aesthetic battle. And not just because the gold is a Leaf. 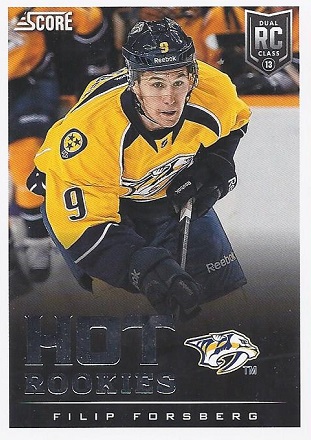 Hot Rookies - #630 Filip Forsberg. Here's what the rookie subsets look like this year. No fire motif this time, and at least the background isn't cut out for a generic background. I'm not too crazy about the text and shading at the bottom through. I always consider it a minor plus when the puck is visible.
#387 Mikkel Boedker
#396 David Moss 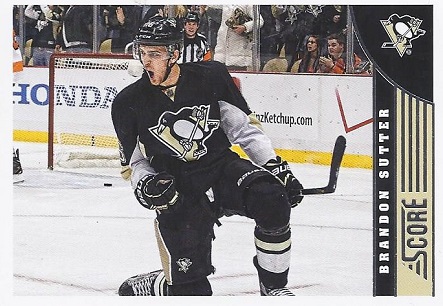 #410 Brandon Sutter - A great celebratory shot of someone I'll certainly look for a second card of for the 2/14 binder. 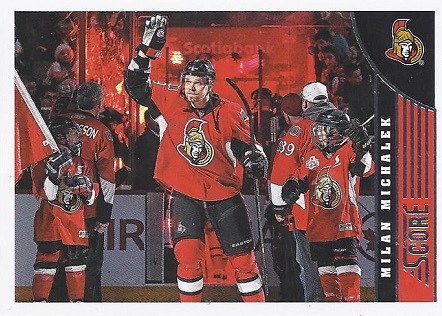 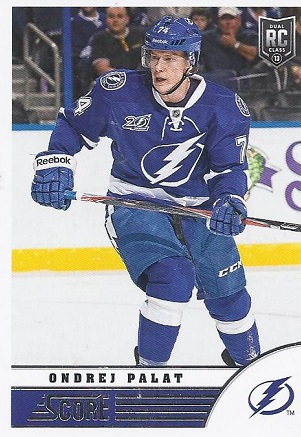 #462 Ondrej Palat. I guess he wasn't hot enough to qualify as a hot rookie.

Having a great variety of pictures in a low end set is always good. It's the reason I elected to build last year's Score as opposed to the O-Pee-Chee. The photos pop nicely without any border separating them and the white border. The backs are my only real complaint. Very bland, but they are at least legible, and the numbers are all in the upper right corner, so it is easier for collation purposes.

Yup. It looks like I'll give this one a go.

Posted by buckstorecards at 14:30