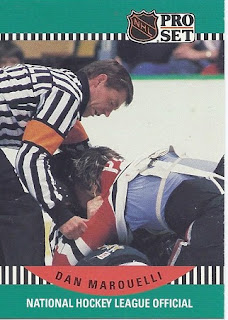 My favourite from this category? A referee card from Pro Set? Yup. The look on his face just screams "Don't I have linesmen to handle this?" as he separates Mike Peluso and, well...somebody else.  So, yes. A referee card is my favourite due to a unique picture and concept. 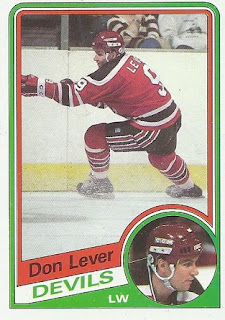 This was the oldest card in the batch. It had a couple year's lead over the the next closest - a trio of 1988-89s. Amazingly, I only have about a couple dozen from this year, but this card was one of them. 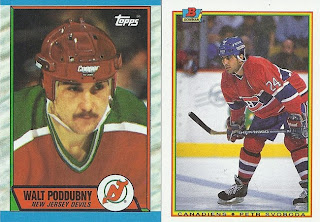 A pair of new additions to the 2-14 binder. I'd already had the Poddubny card in my Rangers alumni collection, so now I have a home for the second one. 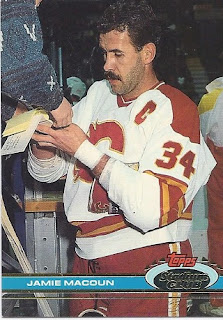 Another hockey variant of a Dime Box Nick mini-collection. Odds I'll remember I have this one before I send out my next PWE? Let's put it at even odds. I love the fact that it is just a random autograph book that he's signing, not a traditional thing like a card, a stick or a jersey. 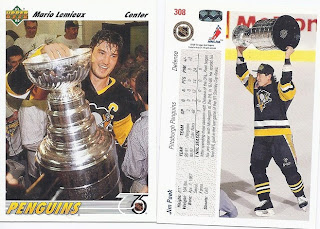 Any appearance of Lord Stanley is great. It's nice on the Mario. Ir's even nicer on the card of a fairly obscure player like Jim Paek. Although if you avidly follow the career of Koreans in the NHL, he's not so obscure. 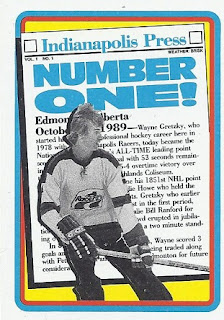 Junk wax era or not - pulling a Gretzky is always great. 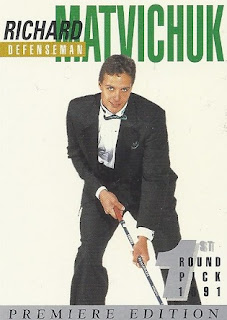 And another one of these oddball cards from the Arena Holograms Draft Picks special edition set. 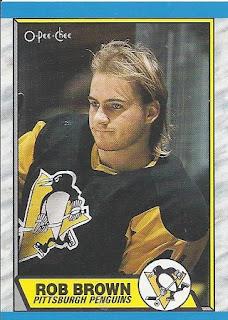 Cards from this era mean one thing - Mullets! Rob Brown look is especially sleazy. He looks about one step away from being the type of guy who would buy beer for teenage puck bunnies who think his hair is just, like, yaknow, the awesomest thing.

And to wrap this up, some 7th Inning Sketch cards. Derek Eberle is, before you ask, related to related to Jordan. They're cousins. The Checklist card might have been a good pull at the time. Yanic Perreault did get a lot a hype at the time.
Posted by buckstorecards at 17:04