I know I said I was going to work my way through the 250 assorted hockey cards in the cache, but today is a special day for one of my favourite players. Carlos Delgado's name will join the Level of Excellence at the Skydome.

So, I'm going to highlight my 10 favourite cards in my Delgado binder. 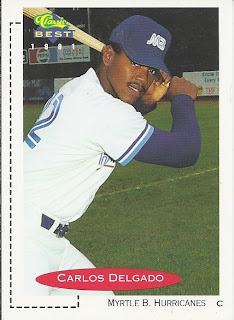 I'm going chronologically, and this 1991 issue is the earliest one in my collection. The cap logo looks like something from the local cable access channel instead of one for a baseball club. 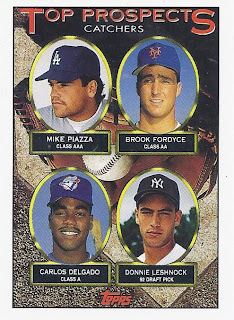 Not just one of my favourite players on the card, but two of them? Awesome! 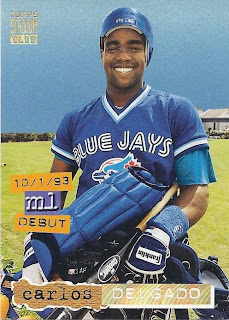 I love the early cards of Delgado where he still is a catcher, and appears with the tools of ignorance. 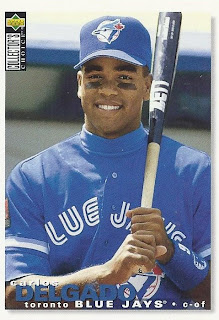 Still listed in positions other than the one he'd eventually settle into. 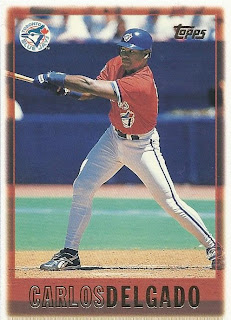 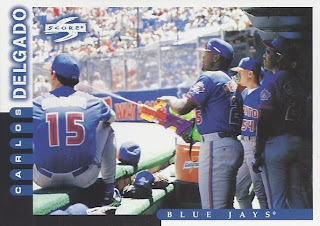 A little different entry. Not a standard pose or a slugging shot - just a fun gameday photo. 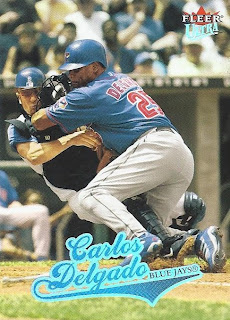 You'd think a former catcher like Carlos would have more respect for his brethren. I tried to work out who was getting splattered. Blue uniform, and #2 visible on the helmet. I think it would be Brent Mayne, who wore #2 for the Royals in 2003. 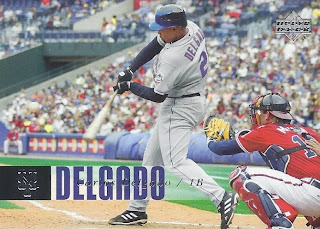 I don't know where this one falls in the chronology of cards, but it has to be one of the first ones since his move to the Mets.  Either way, it is a great photograph. Visible ball. Visible catcher. The tarp. The ballboy. The crowd. So much of the little things at the stadium. 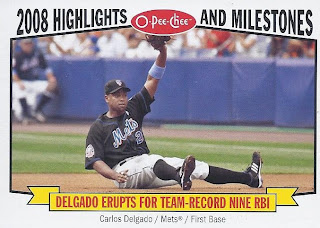 My second card that commemorates an arse-whipping he helped lay on the Yankees. Although why they are using a defensive play for a card that salutes offensive output is beyond me. 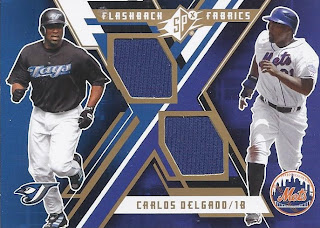 And finally, a dual relic that salutes his time on my two favourite teams.

Posted by buckstorecards at 06:11