Back to Buck Store Basics

Firstly, let's promote a couple things going on elsewhere that I've bought into:

Cardboard Conundrum is hosting a hockey group break. I've traded with Matt in the past and grabbed some great cards in the process. This should be a good break, and there are 20 hits worth of fun to come from the break. $16 buys you a team of your choice and a random second team. There's also a guarantee of a hit from Matt should you not wind up with an autograph/relic from the boxes.

If a draft is more your thing, check out Shoebox Legends' closet clean-out. 16 rounds filled with relics, autographs, refractors, vintage and Young Guns. 4 bonus rounds too! If your collecting is a nice mix of hockey and baseball (I resemble that remark) get in on this $23 for 20 great cards!

Whew. The Godfather was right. It ain't easy.

The past while, as I've worked my way through cards picked up in group breaks, card shows of various sizes and trades, I've neglected the name of the site. I hadn't made any trips to the ol' Dollarama to pick up any cards. I needed some album pages anyhow, so I also picked up a $2.00 surprise box. Back to my roots. Would I get $2.00 worth of surprise fun?

As always, there were four items in the box. The first was a five pack with a 'Guaranteed' Hall of Famer. 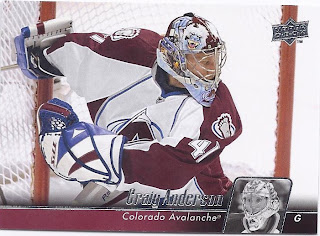 Nope. That's not the Hall of Famer. Great card to go in the ol' mask binder, though. It isn't a $2 card, but I'm happy already. What else was in the pack? 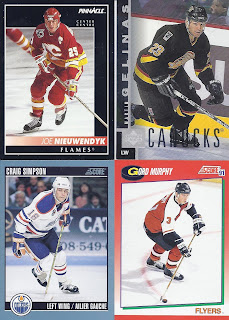 I guess Joe's the Hall of Famer in the pack. Nothing much to savour in this group, but the Anderson more than makes up for it. Also in there was a pack of 08-09 Victory. 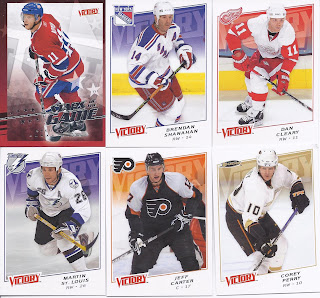 Some good names in that pack. That Koivu insert is definitely going in the old permanent binder. I'm certainly happy with welcoming that one into a new home. Third up was a pack of 80's cards. I guess Bourne would be the best card in this lackluster bunch, but Ruskowski's got a great sleazy 80s mustache. 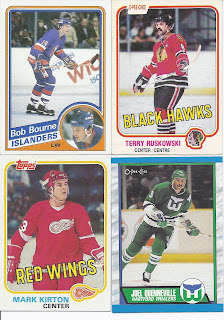 Wrapping it up was a small pack that contained only one card. But it was a memorabilia card. 1 autograph or jersey card guaranteed! Who would it be? 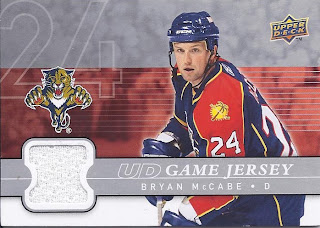 Well, at least McCabe gave me some good memories as a Leaf-hating Sens fan.

Posted by buckstorecards at 13:14