A couple days back, Paul over at Card Boarded had a post up where he mentioned he'd received a package where base cards where used to protect the requested card(s). I thought that it would definitely have been an interesting way to receive free cards. And for me, a free card is a free card. I don't care if the card is of Bryce Harper, or of Brian Harper.

Sure enough, I get some cards through sportslots the very next day, with these on the outside: 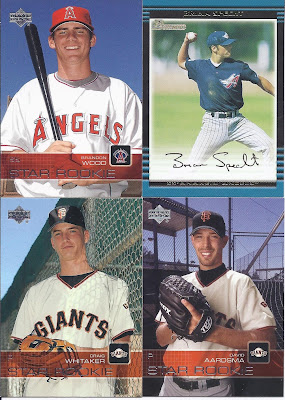 I originally thought that I'd perhaps received the wrong package. There was already cardboard on the outside to protect the cards, and these 4 were the first ones I saw in the package. I opened the pack, wondering what cards had ended up in my possession, only to find the ones I'd ordered.

Of the bonus cards, Aardsma was the only one whose name I recalled. Brandon Wood has been a AAAA type player. The best I can tell from sportlots, this was the last card for Specht, and although that was Whitaker's first card, he only had one more after that.

But still, free cards are free cards.
Posted by buckstorecards at 17:57