By the time this gets (hopefully) auto posted, I'll be sitting through a halftime show featuring Justin Bieber and Carly Rae Jespen. I'm guessing this one will be more of a show for those watching at home than those in attendance.

In the meantime, more Dime Box goodies from the Expo, this being one of several that will focus in on Diamond Kings. 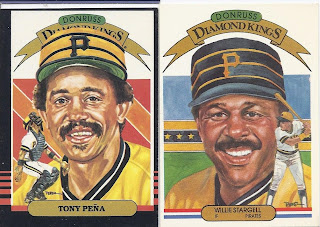 That's a really great portrait of Pops. I also like how the colours on the middle of the card match with the hat and jersey. The Pena one isn't as nice, but I do like how the smaller portrait isn't your standard for the set. Instead, there's a defensive portrait of Tony in the tools of ignorance. 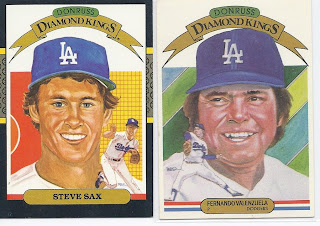 A classic Fernando! Nice to see one of Steve before he ended up charged for all those murders in Springfield. 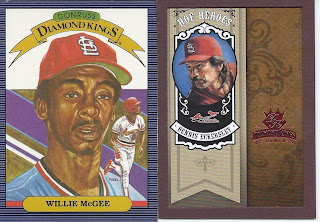 I'm not really a fan of the McGee portrait. He just seems stunned by something. I like the Eck, but I think I would have rather seen him as an Oakland A on the card. He's wearing it on his HOF plaque. The card is a Hall of Fame Hero. Why the Cardinals? 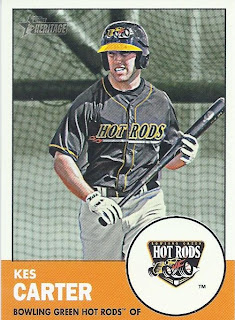 Wrapping this scheduled post up with a completely random minor league card. I just picked it up because I liked the name 'Bowling Green Hot Rods'.

Posted by buckstorecards at 16:45