What I don't expect from a dollar store repack

When I pick up a repack, there are things I expect. It is mainly from the overproduction era, with some recent cards thrown in. But there are gems. Perhaps there would be a unique minor league hockey jersey photo from an ITG set. A memorable photograph. A unique design that I'd never seen before.

Check that. I don't expect X-fractors.

I don't expect rookie X-Fractors that are numbered.

I don't expect rookie X-Fractors that are numbered out of 199.

But hey, sometimes these beauties show up where you least expect to find them. 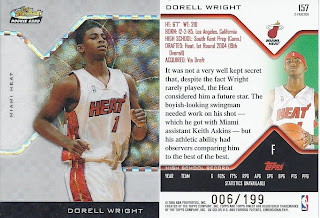 I still was thinking that it was merely a nice card, but searching for more information on it, showed that someone managed to sell one of these on ebay 2.5 months ago for $24.99. Do I think I'll try to flip it? Nope. Just like the dime box Verlander rookie, this one looks far too nice in a top holder.

As always, the best thing about repacks. If you find a gem like this, there's more cards to go with this. All for a dollar. 9 more basketball cards. 10 more football and 10 more baseball cards. That's always something good to expect. 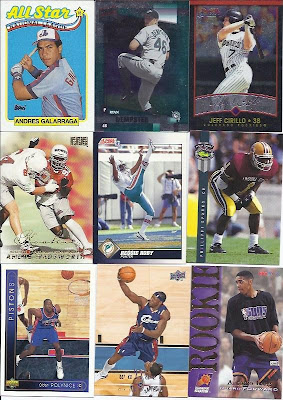 What does it say about me that my second favourite card in the pack is a card from of a punter from one of my least-liked teams?

Posted by buckstorecards at 13:03