Another group break post? Why not? I went for CanCon in the main draft, picking the Expos and Jays, and got randomed the Royals and Brewers. Not exactly the sexiest teams, but I kept them to see what type of goodies came my way. I'll get to the Expos and Jays tomorrow.

Of the two other teams this was likely my favourite card. 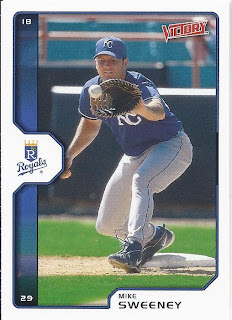 Why? For the same reason I loved the Bautista ASG card from the 2012 Update. It's something different. A photo of a slugger like Sweeney making a play at first place during a spring training game? Sounds like a fun card that I'd probably pass over if I saw it in a dime bin. A closer look at it makes it an interesting card.

As for the rest of the Royals, there were some nice cards. The World Series cover card is really nice. A shame I didn't score the Joe Carter one with the Jays, but I won't complain. There was a debate as to who should get the Saberhagen card, since it listed the Red Sox as the team. If I didn't have a dog in the fight, I would have said that it should be a Boston card, but the panel of judges disagreed. Also, some nice early Beltrans and a Johnny Damon. 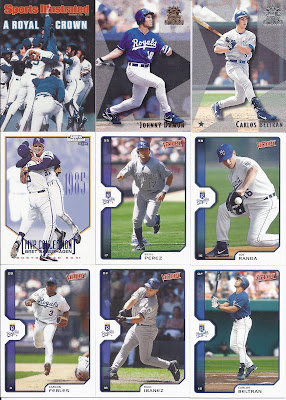 The Brewers didn't score as many great cards, but there were some nice ones. I liked getting one of the last Devon White cards from his playing career. The Grissoms were nice for a tie-in to the Expos, and that is a rather unique photo on the Cirillo. 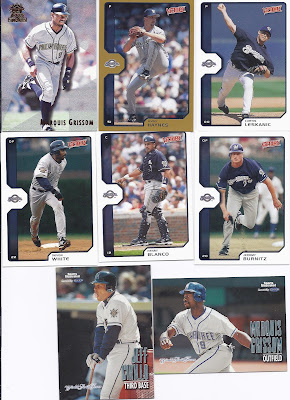 Thanks for the great break!
Posted by buckstorecards at 19:57