Usually, when I'm not set building, I'll try to grab cards from my favourite teams. In hockey, that means Ottawa Senators, and maybe a handful of Bruins. However, my love for the artistry of the goalie masks usually means some oddballs slip into the equation. When Patrick Lalime left the Sens, I still hunted his cards as he continued to feature Marvin The Martian on it, albeit adapting him to his new team(s). Josh Harding has shown wonderful creativity with his, and I especially like the one that depicted the Ottawa fire department putting out a fire on the Wild team bus, one that destroyed his equipment. Both of those players will probably show up here shortly.

So who's in that spot now?

Mike Smith of the Coyotes. For a similar reason to Patrick Lalime. Looney Tunes. 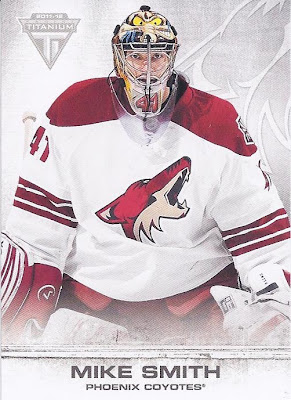 The mask features a ferocious Wile E. Coyote, clad in Acme equipment, naturally, with a mouth full of roadrunner feathers. Later last season, it got even better, as it added the roadrunner's severed head in front of the stick (by Mike's chin). I don't think that one's shown up on a card yet, but I'll certainly be scouring the dime bins looking for it.
Posted by buckstorecards at 15:54