My beloved Mets and almost as beloved Blue Jays were picked before I got there, so I decided to fish for some of my favourite players. The Pride of Etobicoke - Joey Votto and bulldog fanatic David Price. So, I picked the Reds and Rays and hoped for the best.

I picked up a couple of BJ Upton relics, which I turned around and swapped for a couple of Blue Jays. Firstly, the David Price. 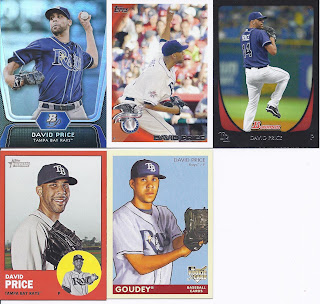 A nice Goudey rookie and a red parallel! Good stuff. Let's think horizontally for the next group of scans. The Jennings card was on my wantlist when I first saw the picture on it. A great play at the plate picture. We've got another parallel for an Upton. That Longoria 'Career Day' insert is heading for the ol' permanent binder. Ditto for that Heritage team photo.

And wrapping up my personal faves with some classic vertical cards. 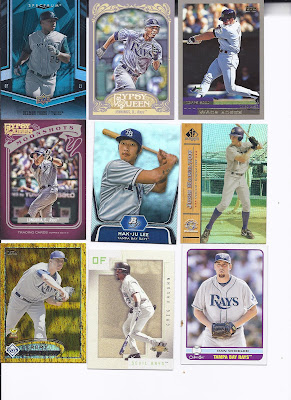 Shiny! Gypsy Queens! An early Josh Hamilton. An O-Pee-Chee card for a pitcher without the word lanceur on it anywhere. I still think that is so wrong. The Young card should have ended up with the Twins. But when you have to sift through and sort a few thousand cards, 1 might find its way into the wrong stack.

Thanks for the great cards! I'll have the Reds goodies up Thursday. Or late Wednesday.

Posted by buckstorecards at 02:59