Let's keep on going. One last post before I head off to the Expo tomorrow.

Joey Bats. Brett Lawrie and an autograph! Sweet stuff. But, the goodies kept on coming. I got some gold #'d parallels. And it continued the trend of "If it is a gold parallel, it's gonna be horizontal." 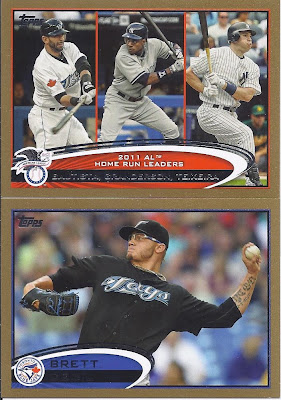 Update set brought some nice stuff too. Nothing spectacular, but I love the fact the photo on the Bautista ASG card is of his catch and not a standard slugger card. I like the photo on the Happ card, and it's nice to see one of Oliver in a Jays uniform. A shame they didn't do one of Vizquel, though.

And finally, sone stuff from the Pro Debut set. A couple of good team names in there - The Lansing Lugnuts and the New Hampshire Fisher Cats. Plus, we have the latest entry in the Jays "Catcher of the Future" files - Tracis D'Arnaud. 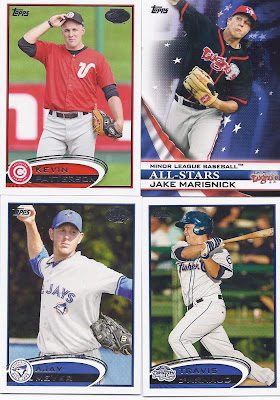 Thanks for the fun group break!
Posted by buckstorecards at 19:41