I promise that I had a Blue Jays themed post planned for today, even prior to the mega trade yesterday. To be honest, as long as it got Escobar out of town, especially after the eye black incident, I'd be happy about the trade. But this is the first time in ages I'm more excited about the Jays than the Mets. I'm still more loyal to the Mets, though.

Enough of the current stuff, let's head back to the dime bin and some more of the Diamond Kings I freed from its grip. Again, chronologically. 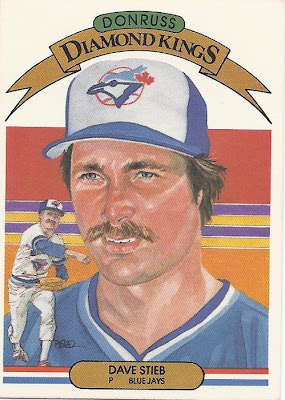 This was another one of those cards that have been on my "I really should try to get my hands on this one" list for a bit. Nice to add it, and it is of one of the players you most associate with the Blue Jays in the 80s. Of the 9 names inducted into the Level of Excellence at the Dome, he's the only pitcher. Prior to RA Dickey equaling the mark this year, he was also the last pitcher to throw back-to-back one hitters. Unlike Dickey, both his hits were surrendered in the 9th inning. With two outs. And two strikes on the batter. And that is the closest anybody would and likely will ever come to equaling Johnny Vander Meer's record of two straight no-hitters. 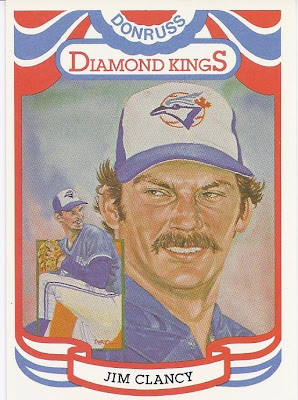 The early 80s Jays really had a couple of underrated pitchers in Stieb and Clancy. They really did fall off after these two, though. Luis Leal? Jim Gott? 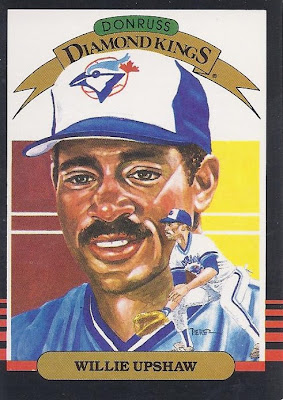 The Upshaw selection in '85 was somewhat puzzling. I might have selected Moseby instead, seeing as he was the anchor of what was becoming a pretty good outfield. George Bell was just on the verge of stardom (and he'd be next year's Jays DK, but I already had a couple of those cards). 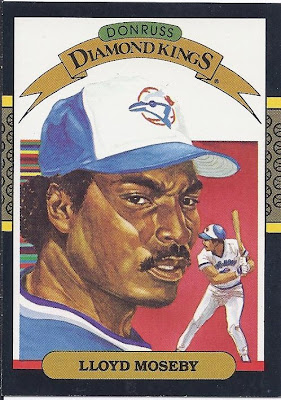 Lloyd got his due in '87, although I might have selected Jesse Barfield, coming of a league leading 40 home runs the previous season. Jesse did make the Leaf "Canadian Greats" selection in 86. Canadian Greats were kind of a bonus Diamond King card, that only were part of the Leaf sets. It was a Perez portrait, but it only had the headshot - no small picture as well. I think they were in sets from 85-88. Stieb, Barfield, Mark Eichorn and Bell were the respective players. 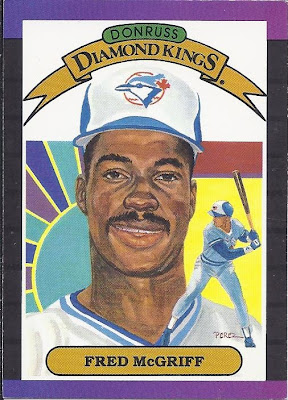 Fun factoid. It wasn't until 1990's Kelly Gruber that a Blue Jays Diamond King card featured a picture of a player who was completely clean shaven in the portrait. Even Tony Fernandez had a slight mustache in his '88 card. But that's an appropriate factoid for this Movember.
Posted by buckstorecards at 14:15