Now, onto the two teams I drafted. The two Canadian teams.

With the Blue Jays, I actually picked up two copies of this one, and it is one that was among my wanted cards for quite a while now. 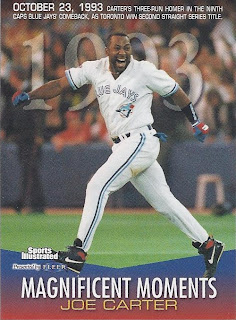 I will never, ever get tired of seeing this moment preserved in all its cardboard glory.The remainder of the Jays yielded a couple of always welcome Carlos Delgados, an O-Dog rookie card, and an Esteban Loaiza (So, whatever happened to that Michael Young guy they traded away?) 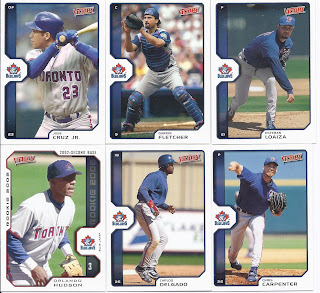 The Expos portion of the break yielded my favourite card of the break, that sweet SI Vlad Guerrero. Sometimes, the best card you get is a base card.

I got a good number of Victory cards. 2 short of a complete team set, missing only Brad Wilkerson and Tomo Ohka. I'll probably look into grabbing the last 2 off sportlots. I certainly can't imagine seeing them in any sort of dime bin here. 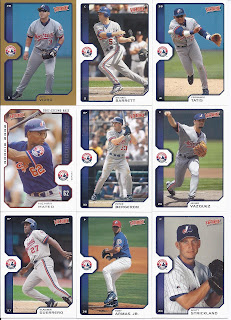 As for the Stars cards, I liked the Fullmer cards, since he's another one of those guys who have played for both the Jays and Expos. As for Urbina. Yeah. That one's joining the Mel Hall and Tommy Kane cards in the binder of shame.

Some really nice cards made their way to me on this break. Thanks for the Break!

Posted by buckstorecards at 09:42