My COMC to-be-posted container is almost full. Plus, I have another 100 cards on the way. Fortunately, most of those are of the set builder variety and will not be scanned for this blog. But I really need to work through this backlog before the next package arrives.

And by backlog, I mean there are still Black Friday cards in there that I haven't been arsed to post.

So, why not start with a two-card post of Ottawa Senators cards? 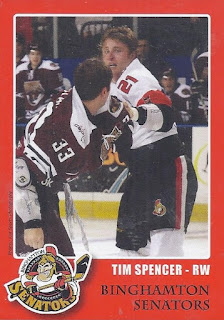 And, to fit the title of this post, this one's dedicated to the enforcer types, but lacking any cards from any of the Enforcers sets. Fisticuffs rarely make an appearance on hockey cards, so this addition was a must for me. Although Tim never reached the NHL with the Sens, or any other team, I'm still adding this card to my Sens collection.

And I can work out where this fight is from. The opposing player is from the Hershey Bears, and is wearing #33. That's Patrick Wellar. They did not scrap during the 09-10 season, but had a pair of fights in 2010-11. The second one has video, but they are wearing opposite colour jerseys in the video. So, that traces the photo of this encounter to October 15, 2010. 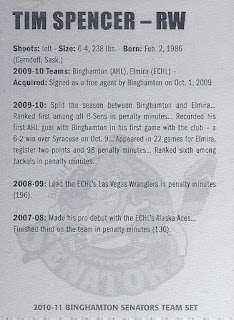 And, looking at some of the information on the back of the card, the choice of photo seems very appropriate.

And the other card: 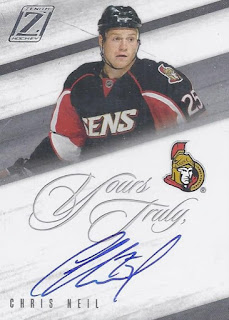 How about a member of the 2000 club, and by far the active leader in PIM? The autograph is on card, which is nice, but I really do like how the script on the "Yours Truly" contrasts against the style of play that Chris Neil plays.