The Bills Are Contenders!

When I said I was expecting mail that might put a slight delay in the posting of my latest 16 pack repack, this was one of them. I picked up the Bills in a case break of 2015 Panini Contenders last week at mojobreak.com, and for once, the post office actually did a pretty good job with these showing up less than a week after the packs were busted last Wednesday. Let's take a look at the cards!

From the 100 card base set, the Bills got 3 cards in the bunch. This is my first card of the latest QB saviour in Orchard Park, and based on the first season, Tyrod Taylor might be the answer to what they're looking for. But, I've felt that way before post-Jim Kelly, so I won't get too excited yet. Considering this team will see 4 Presidential terms go past without a playoff appearance, I can't get too excited.

And for those wondering how the boxes collate, here's the count on base cards. 12 boxes in a case. 12 each of Tyrod, LeSean and Sammy. So that does bode well for a set builder that grabs a box of this stuff.

No stats on the back of these cards, but at least they have more details than one saw in last year's release.

And now, the inserts: 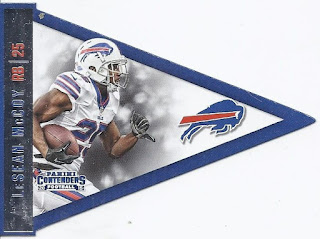 Probably the most prevalent for the Bills was the pennant, since I got 3 of these. This was it for dupes the rest of the way home. The dupe of this, as well as 1 each of the base cards, is already packed up for whenever This Way to The Clubhouse gets a new mailing from me. 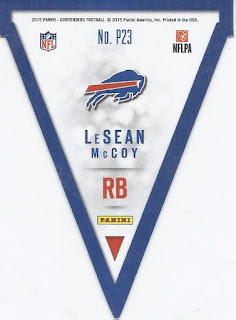 The backs for this are pretty bare, but given the pennant look to them, that actually makes sense, since there really shouldn't be anything of important on the back of something meant to be displayed. 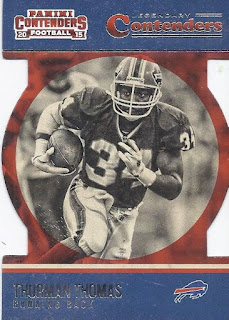 More Bills running back love with this die-cut Thurman Thomas insert. Legendary is a great way to describe him and his place in Bills lore. I like the B&W photo, although it makes it tough to discern which team he's burning on yet another great run. 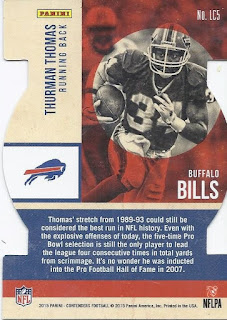 And the back of this card. 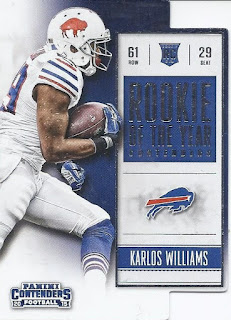 Back to the ticket motif with this Karlos Williams insert. I sure didn't expect what we got from this 5th round draft pick, but he looked really good when given the chance, as the two-headed monster at RB changed from Spiller and Jackson to McCoy and Williams. And perhaps Mike Gillislee providing a third head of the monster. 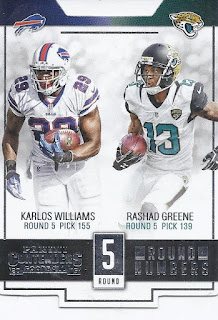 Karlos also makes an appearance on this Round Numbers insert, alongside fellow 5th round pick and Seminoles alum Rashad Greene.

But, you pick up this set for the rookie autos, and this set really delivered. 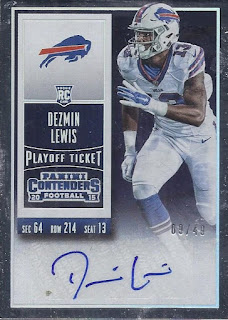 First up, this stickergraph of Dezmin Lewis. The playoff ticket autos are generally numbered to 199 or 99, but this is a variation that is shorter-printed than the regular. If you get a helmet logo on the card, it is the standard version. Get the logo only, and that's the SP. Meaning this is numbered to 49. 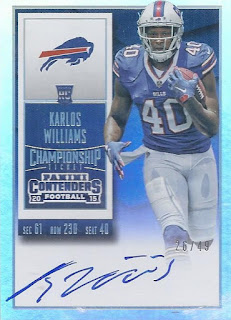 The variation also appears here with this Karlos Williams. Championship tickets, depending on the player, are to 99 or 49 for the regular one, or 49 to 25 for the variation.

But, I won't be keeping this card, and will likely send it off to COMC to recover some of the money from this break. 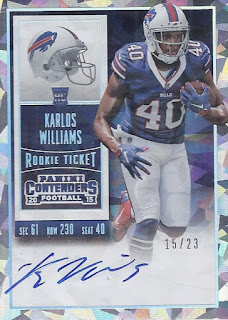 After all, this Cracked Ice numbered to 23 (regular and variations are both the same) is a far nicer addition to my Bills collection. A beautiful looking card in hand, and an easy keeper in lieu of the Championship ticket.

Some great additions to my Bills PC in this break! And I have Raptors to get to with a later post.
Posted by buckstorecards at 10:28