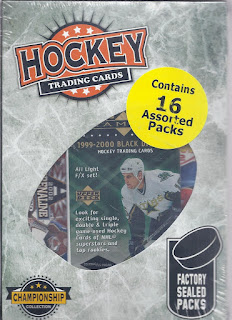 The first of these repacks actually landed me some decent-looking cards. Let's try again.

16 packs, of which they were these:

Last time, I used random.org to determine which of these I opened. Not this time, I'll just open in whichever order feels appropriate. And for the first post, I'll start with the Score packs. 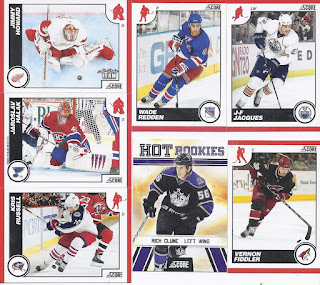 A really nice start with a couple keeper photos. I forgot that it took Jimmy Howard several seasons before his actual rookie season. Really nice photo for the misc collection as well. Jean-Francois Jacques was always a fun name to say. This was his last NHL card, and he's been playing Austria the last couple seasons. It wraps up with two more horizonital cards. The one-per-pack glossy was the Vernon Fiddler. 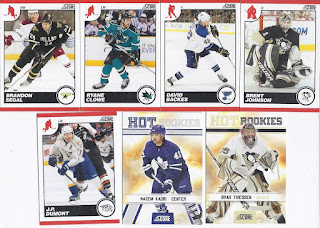 Not really a memorable pack photographically speaking, but there's a new Nazem Kadri for my Rangers alumni collection. That's good enough to make this pack a winner. Thiessen is the glossy parallel, and a sure fire addition to the masks binder, and his only representation within that. 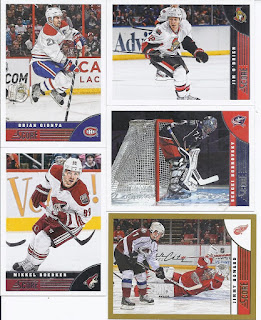 Off to the double-rookie class season. Unfortunately, that means 12 card packs and having to selectively post the interesting (to me) cards from them. A couple great goaltender photographs highlight this one. Jimmy Howard continues his mini streak of awesome cardboard photography from the first season of Score's return to their final season. Looking at his other cards from 2011 and 2012, he had a really good cardboard run. I now have over 100 of these gold parallels, a sign of how much of that stuff I busted that year.

That Bobrovsky belongs in a museum. Rounding out the rest of the scanned cards, a great photo on the Gionta, a Senators card, and another Rangers alum in Boedker. 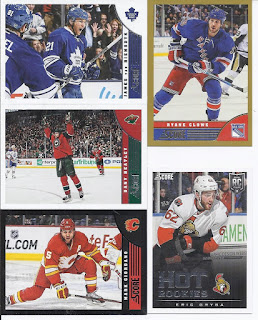 The big pull out of this group of packs is here in these. Black parallels were a tough pull with the set, falling at about 1 per jumbo box. I'm not sure what rate the smaller packs had them at, but I'll assume slightly tougher. Nice that is of a player that's really come into his own the past couple seasons. Dany Heatley wins the photo battle here quite nicely, and shows that one doesn't need to have a super-cropped photo for a memorable picture. I also highlight the JvR card to show off the throwback-ish Leafs uniform.

And that's group #1! I can't hate this group of cards when I pull a pretty rare card, and some really great photos with the Howards, the Heatley and the Bobrovsky. More packs tomorrow!
Posted by buckstorecards at 09:14