Another trip through the COMC to be posted, and some new cards for my Kitchener Rangers alum binder, including two players making their collection debut. 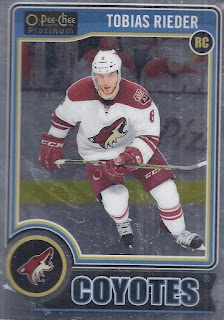 The first debut card, and a card that has been waiting several months for a chance to post. Tobias made his debut last season and looks to sticking around. He was drafted by Edmonton, and shipped to the desert for Kale Kessy, who has yet to debut in the NHL. This was the only base card, all the rest are hits. 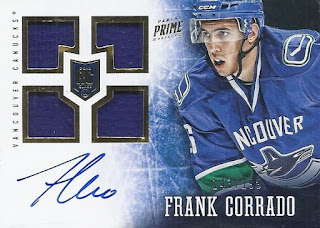 And the second debut in the binder is Frank Corrado. Frank only spent a half-season in Kitchener during a stretch run in 2013. He's bounced between the AHL and NHL the past couple seasons, and is now in the Leafs system. 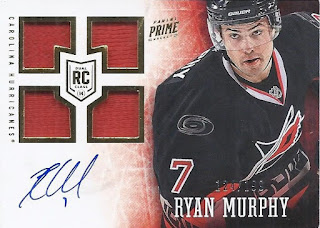 From the same set, here's a teammate of Corrado from the end of the 12-13 season. Much like Corrado, Murphy has been spent the past few years going back and between the NHL and AHL. But, since Murphy was a high draft pick, I guess Carolina will be patient with him. 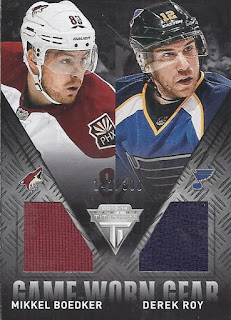 And a dual relic with two Rangers alumni wrap it up. Both spent their entire OHL career with Kitchener, and both made the Memorial Cup finals in their career. Derek Roy was part of the '03 winning team, while Mikkel was on the '08 team that won the OHL championship, but lost to Spokane in the final. 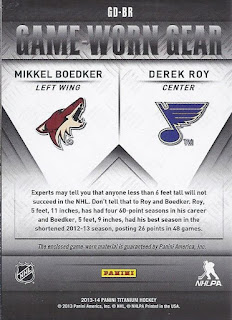 But the back of this card has everything to do with their height, but nothing about their juniors connection. But I'll still welcome this card to my collection, with it being my second NHL level card with more than 1 Rangers alum on it.

And there you go.
Posted by buckstorecards at 08:39