The Royal Rumble goes tonight, so why not show off the cards from a rack pack grabbed from Wally World?

No complaint about the cover boys for this. I assume that given the Heritage theme, Hulk Hogan might have been one of the three, but given his fall from grace, he's nowhere to be seen, and doesn't appear to have any cards at all anywhere in this set. 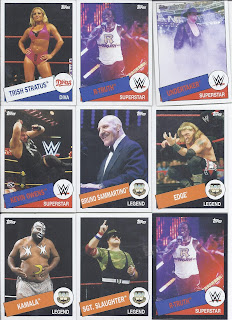 I have no complaints when my first card out is one of Canada's finest exports to the wrestling world. CanCon is all over this, with the appearance of Owens and Edge as well. Kevin Owens does also get the rookie card designation. If someone told me that Bruno Sammartino would be in a WWE set a few years back, I would not have believed it.

The base set is 110 cards, with the first 50 being legends, the next 10 being divas, then 40 current wrestlers, with the last 10 being NXT/Rookies. Ones that are on the main roster get the base card design from #51 to #100, while those not on the roster get the NXT logo.

The black bordered parallels fall at a rate of 1:6 in these, meaning I ended up with two R-Truth cards within the same portion of the pack.

And if you haven't checked out R-Truth's birthday celebration from Smackdown's off-air taping on Tuesday, check it out. 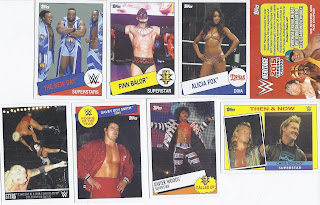 Part two contained a few more base cards and the inserts. DON'T YOU DARE BE SOWA! The New Day is all over this grouping of cards. Pour one out for Francesca the Trombone. There's one of the NXT cards as well. The coupon is for $3 off a blaster. Considering I've seen 0 blasters at Walmart, I'm just glad that wasn't considered one of the cards in the pack. One the insert row, was that really the best photo that they could find from that match? The Sting insert set is 40 cards worth, while the others are 30 each. It looks like Davey Boy is wearing one of the legendary Ribera Steakhouse jackets on his card, which is just great.

And there you go. Enjoy the Rumble!
Posted by buckstorecards at 07:58